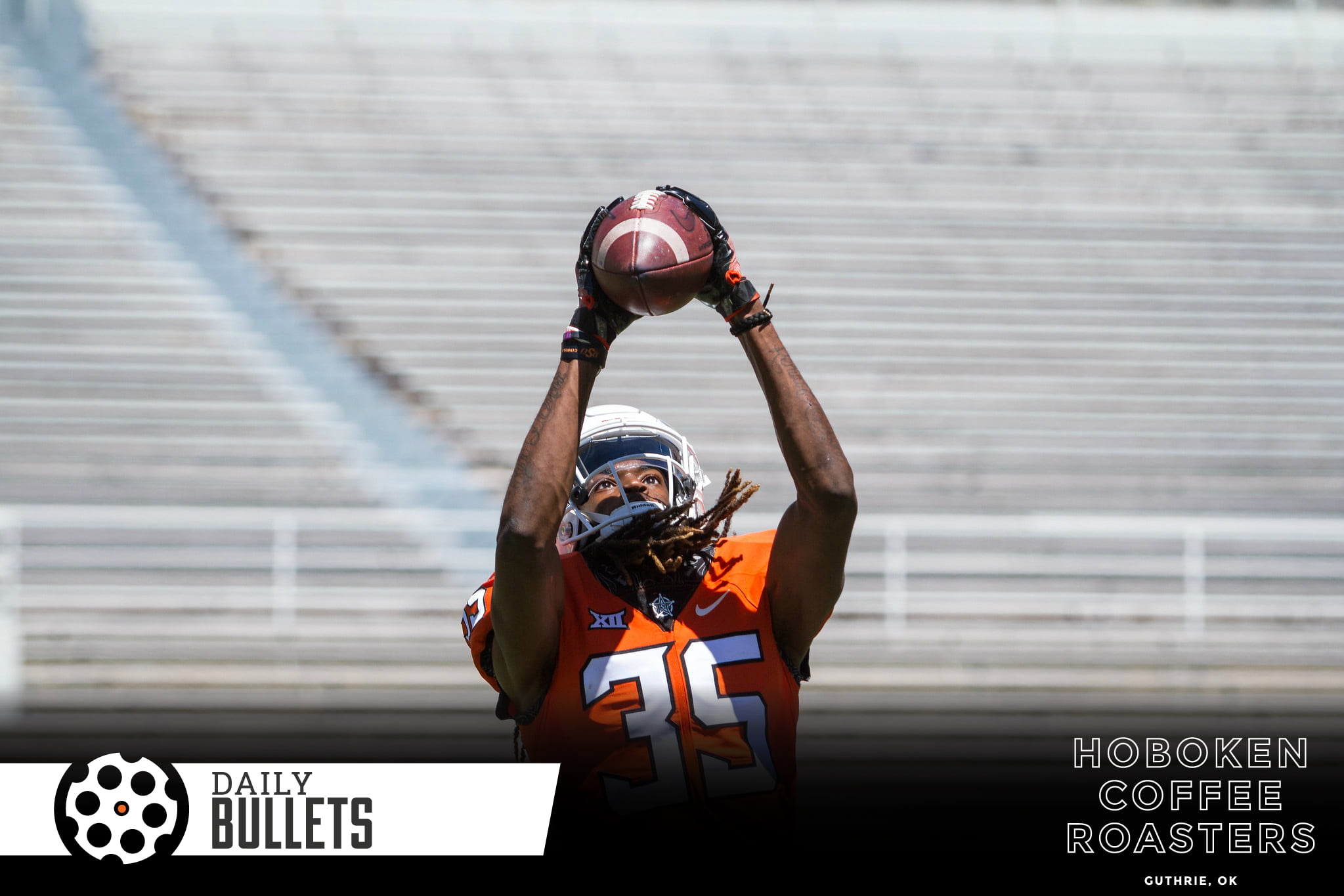 Happy Easter. We won’t be doing much work around here today and hope you enjoy celebrating a special day with the favorite people in your life.

• Forget the QB situation, how encouraging is this from Mike Gundy?

Gundy called OSU’s pass blocking “awesome,” especially from a second unit that has virtually no college experience. Yes, the Cowboy defensive line is rebuilding, but Gundy said the OSU pass rush was aggressive, and the offensive line held up. [NewsOK]

• Haisten looks at the better teams of the Gundy era and, of course, why Brandon Pettigrew was the FMOTB.

From the bleachers, it’s impossible to gauge intangibles like determination and grit. But from his vantage point as the head coach, Gundy, after 15 spring-practice sessions, can sense whether these Cowboys are beyond last season’s Cowboys in regard to toughness. So, what about it? Will this squad have that 10-win edge?

“That’s the direction we’re going,” Gundy said, “and that’s where we hope to get to.” [Tulsa World]

If you dive into that article you can tell Tylan is already (or will be) a great leader. I could not possibly be more subscribed to him.

• Marshall Scott wrote about C.J. Moore on Saturday after the spring practice, and I could not be more intrigued.

C.J. Moore was a single-coverage terror Saturday, making a handful of catches over defenders. It started in the 7-on-7 portion of the practice when Moore came away with a toughly contested ball against Kemah Siverand. Moore did it again a few minutes later, this time in the end zone off a Dru Brown pass. [PFB]

Also this was a statement from somebody in our Slack during the game: C.J. Moore is a mix of Megatron, Jerry Rice, Michael Jordan and Tony Hawk.

“We could,” Gundy said. “If somebody wins the job, then we’ll certainly say, ‘You’re the quarterback.’ If both of them earn the right to play, then we could very well play both.

“Last year, I said from Day 1 that Taylor was going to be our quarterback. He just had too much experience and understood our offense. This year, you’ve got two guys who don’t have any experience at all, and their reps have been equal.”

Both made plays and mishaps Saturday. They each got two sets of five plays in a 7-on-7 drill. In their first sets, each quarterback went 4-for-5. Sanders probably delivered the best throw of that set, a deep fade route where C.J. Moore Mossed Kemah Siverand. [PFB]

I guess a dude who rocks this haircut kind of does whatever he wants.

Cowboys might still be in spring ball, but Gundy’s hair in peak mid-season form pic.twitter.com/8yX7oqCKYf

• Chris Harris officially signs, which means OSU is back in the top 20 of the overall 2019 team rankings.

• Hova and Matt Wolff are both semifinalists for the Ben Hogan Award.

• OSU walked off Texas for a sweep.

A walk-off hit for a series sweep makes for a fun Saturday afternoon and evening at Allie P. Recap, stats, photos & highlights from the win: https://t.co/f6hOLF9moi #GoPokes #okstate pic.twitter.com/qPF3BAwiTq

• Darrion Daniels was there on Saturday?

Former #OkState DL @DarrionGolden79 and @ESmithJr_56 showing some love for their teammates, showing out for Saturday's spring finale. pic.twitter.com/lNjIl21mnO

• He was forsaken by the father.