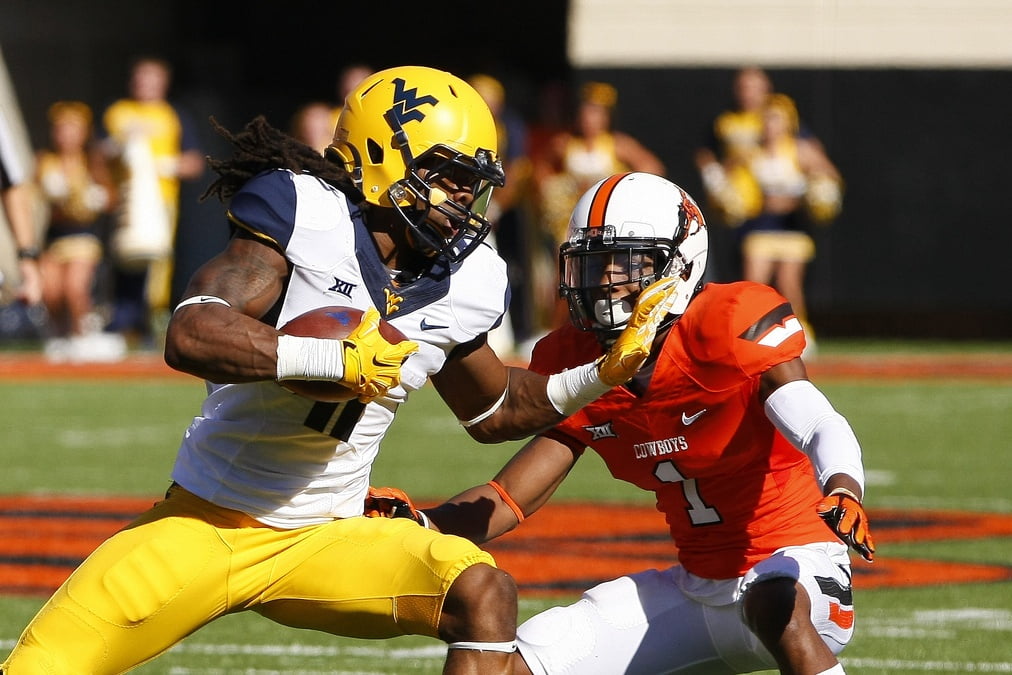 The Kevins go at it. (USATSI)

• Jhajuan Seales being out really doesn’t affect this team at all. That’s a strange thing to say about somebody who is (arguably) your best WR.

• Oklahoma State really should sell second half tickets to Homecoming games so all the seats left empty by Greek Nation could be filled.

• Here’s a scary thought: Our best offensive play is probably either a deep pass interference or Daxx rolling out and hitting the TE

• OSU went 25 offensive drives (or 91:15 of actual game time or eight quarters) between offensive touchdowns (Q2 against Kansas and Q2 against WVU). Here’s a look (start at the TD halfway down the first graphic): 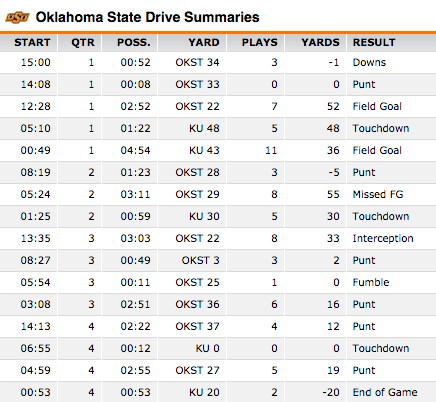 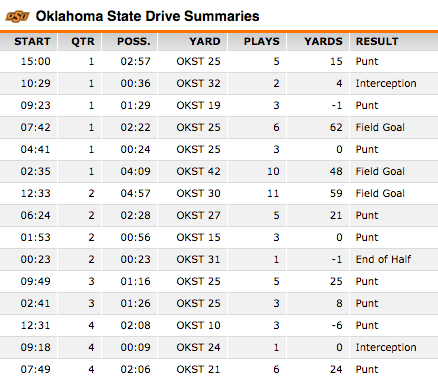 • Rece Davis said “flat-footed frogs” when showing a TCU highlight in the first half. I liked that a lot. Somebody has to provide the alliteration.

• If you were watching on TV: I like the flip the field camera. Would love one on top of BPS.

• Clint Trickett and Merton Hanks should have a neck off.

• This was pretty funny (and true).

@pistolsguy it's almost like we switched positions with TCU.

• Me no understand the “double coverage pass to our shortest receiver” play.

• Once OSU’s offense started cranking and Ben Grogan started shanking again in the second quarter I knew all was right with the world once again.

• Why is Tyreek covering punts? What the hell? Tyreek had more tackles in this game than Ramon Richards did!

• In the second half it looked like we trusted our defensive line and put them on an island so that the linebackers could drop back and help the secondary. Call it the Ramon Richards Corollary.

• The helmets got all the talk during the game but OSU’s sock game was out of this world.

• OSU almost outgained WVU on offense so…yeah I don’t know what that means.

Wow. Cowboys D on the field all of that quarter — all but seven plays. Offense needs to help soon.

• The 3rd and 18 on the goal line that WVU converted was so crushing. I know it didn’t end in points but you had a chance to flip the momentum (and the field) and failed to do it right there.

• The “can you put pepper spray on my sandwich” commercial makes me laugh. I won’t apologize.

• The announcing crew said Saturday was the hottest October 25th ever in Stillwater. I have no idea if that’s true but it sounds about right.

Not that I blame anyone, at all, but this is as empty as I've seen Boone Pickens at the end of a game. #okstate pic.twitter.com/Kg6A7H4Ex8

• Why does Rudolph always have his helmet on? I always think he’s going in and I’m always fooled.

• Daxx should aim five feet in front of the feet of his receivers.

• What was up with the kicker false start? How was that not a penalty?

• After Saturday OSU and West Virginia are the only two teams in the country without a fumble recovery.

• This is not unexpected but still awesome.

• Teddy Johnson has OSU’s only offensive TD in the last 10 quarters. Let that one sink in (or don’t).

• Dana did all kinds of Dana things which was great (obviously). The backwards hat F-bomb might have been my favorite.

• Not OSU related but this made me smile.