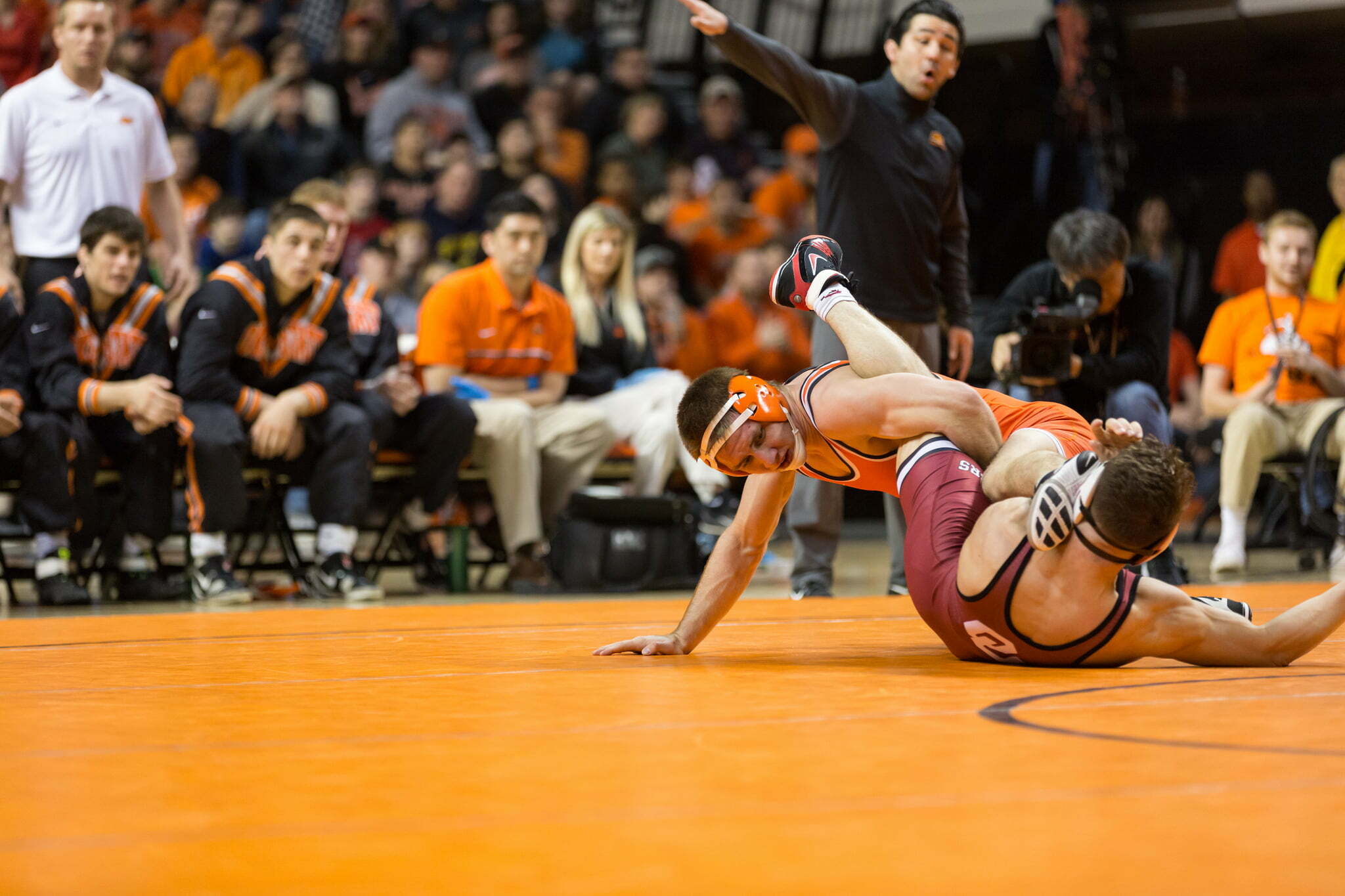 This is not a post about Mike Gundy’s glorious mane.

Now that we have that out of the way, I have some important wrestling news to deliver to you. After 17 seasons with Oklahoma State, Eric Guerrero has accepted the head coaching position at OU with the Oklahoma RTC.

What is an RTC?

An RTC is a Regional Training Center within USA Wrestling. Throughout the year, wrestlers will compete detached from their university team, usually under the name of the RTC associated with their school. At Oklahoma State, the RTC is the Cowboy Wrestling Club. Iowa has the Hawkeye Wrestling Club. Penn State has the Nittany Lion Wrestling Club.

Why do universities set up RTCs?

This gets complicated. The short answer is NCAA rules and IOC rules combine to make things just as convoluted as they sound like they would be. Athletes can only represent their school and their country a certain amount of times per year in order to be eligible for both. To get around these rules, and to receive funding for all of the travel that is required for the sport, universities have set up these regional training centers to make it easier on the athletes. Not too long ago, all training for USA Wrestling had to take place in Colorado Springs.

The main reason for setting up an RTC is so that your former wrestlers can stay with the program after their NCAA eligibility is up to train for international competition. This helps as it puts more guys in the wrestling room to train with. This also helps recruiting, as a strong RTC will help you get the athletes that are dreaming beyond their collegiate career with hopes on Olympic Gold.

What is the Oklahoma RTC?

The Oklahoma RTC is the RTC associated with the University of Oklahoma. I know… a Cowboy legend is going to be coaching Sooners and helping their program get better. It’s not a great look, but you can also look at it this way, Texas Football really became what it is by hiring a Sooner. Look at this as a sign of respect from OU to our program.

Why is Guerrero leaving now after so long?

That is hard to tell. Could be that he is realizing that he is not getting younger and Coach Smith probably isn’t going to retire anytime soon, so this is the next step in his career. Could be monetary. Maybe some donors that care about OU Wrestling were sold that developing a strong RTC would help Lou Rosselli and Co. recruit higher quality east coast talent?

Regardless of the reason, Eric Guerrero has earned his spot as one of the best to ever be a part of the Oklahoma State program. A three-time individual NCAA champion, a member of the 2004 Olympic team, and a coach on the Cowboys staff for four team titles. Not a bad resume. It is remarkable that OSU was able to hold onto him for as long as they did.

Who is going to take Guerrero’s spot?

Here are some potential candidates.

• Chris Perry: Two-time national champion. Three-time All-American. Chris has been on the coaching staff as a volunteer coach for the past three seasons as he also trained for international competition. Chris is also the nephew of John Smith. Best odds are going to be on Perry, frankly.

• Alex Dieringer: This is your most recent “star power” hire that is also a Poke. Ringer is a three-time national champion and four-time All-American. Currently making the rounds on the international circuit, and the third-best wrestler in his weight class. Alex could certainly become the best by the time the 2020 Olympic games roll around, as one time Gold medalist Jordan Burroughs is on his last leg of competition and Ringer has been catching up on Cornell legend Kyle Dake over the last few chances.

Ringer may decide to focus on his Olympic dreams for now and be a volunteer coach.

• Jordan Oliver: Two-time national champion. Four-time All-American. JO is not without controversy, but he is a Jersey boy that could help associate head coach Zack Esposito, another New Jersey product, increase OSU’s recruiting presence on the East Coast. A much-needed aspect for the program to remain relevant. JO could also be primed for a run at a spot on the 2020 Olympic team, as his win over Penn State’s Zain Retherford at the US Open proved back in May.

• Chris Pendleton: Two-time national champion. Three-time All-American. This hire would be my favorite of the current former Poke options. Chris is one of the driving forces behind Arizona State’s resurgence and a great recruiter that has helped to put together what may be the top class of 2018 for Arizona State. He has been a strong assistant at a strong program and would help the recruiting effort in California and the Mountain States.

• Steve Mocco: Mocco would be an instant fan favorite… and it makes it even better that Iowa fans hate his guts. Mocco and Zack Esposito are good friends, and Mocco did just take a job at Brown as an assistant coach. The biggest pros here would be that Mocco would bring back a solid training partner and coach for OSU’s heavyweight guys, something that has been missing the last several years. Mocco also would bring with him the attitude that Cowboy fans love. Mocco was the meanest son-of-a-gun on the mat, and won a whole lot more than he lost in his career.

• Kendall Cross: The 1996 Olympic Gold Medalist just moved his family from Dallas to New York City to take over the head coaching position at the NYC RTC. I highly doubt that he would pick up and move again, and at his age, it would be a wiser move for Coach Smith to go young for a third assistant coach. However, Kendall was one of the best to strap on the singlet for the Cowboys, and his Olympic success would be nice to have in the room. It also doesn’t hurt that Terry Brands, associate head coach at Iowa, hates Kendall with a burning passion.

• Johnny Hendricks: This would be a move from a pure star power perspective. Not much coaching experience, hasn’t been a pure wrestler in a long time, and may still be trying to make his MMA career happen, but wouldn’t we all love to have Johnny back in the room in Stillwater? You better believe that it would help recruiting.

• Mark Perry: This isn’t going to happen. John Smith’s nephew that went to wrestle at Iowa was just named the head coach at the Hawkeye Wrestling Club. As an assistant at Illinois, Perry put together an impressive roster and trained up one of the better wrestlers in recent memory in Isaiah Martinez. It would be really cool if Perry could forgive Coach Smith for going with Johnny Hendricks over Perry on the recruiting trail … but Oklahoma State also has a penchant for keeping coaches in house … especially for wrestling.

The list could go on for potential hires. With as many greats that have come through the wrestling room in Stillwater, I am sure the program will be just fine moving forward. The most important thing is to hire a strong recruiter that will keep OSU in competition with Penn State, Iowa, and Ohio State.