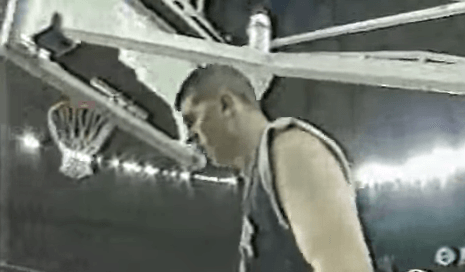 Well, this is something I certainly did not know. The first thing (post? bit of media?) ever on ESPN.com was a “postage stamp” video of Big Country breaking the backboard at the Final Four in 1995. That’s how the site debuted.

ESPN senior writer Steve Wulf told the story like this:

Like “Big Country,” the video was a little crude, and unlike him, very little (think postage stamp) and very short (eight seconds).

Of all people who would kick off one of the most progressive digital media outlets on the planet today, it was Big Freaking Country who started the revolution.

He was interviewed for the piece (which you should read) on ESPN.

Two of the nine billion pageviews the site got last year.[1. Reference: PFB gets about 5 million a year.] And it all started with a bunch of shattered glass in one of OSU’s two Final Four runs under Eddie Sutton.