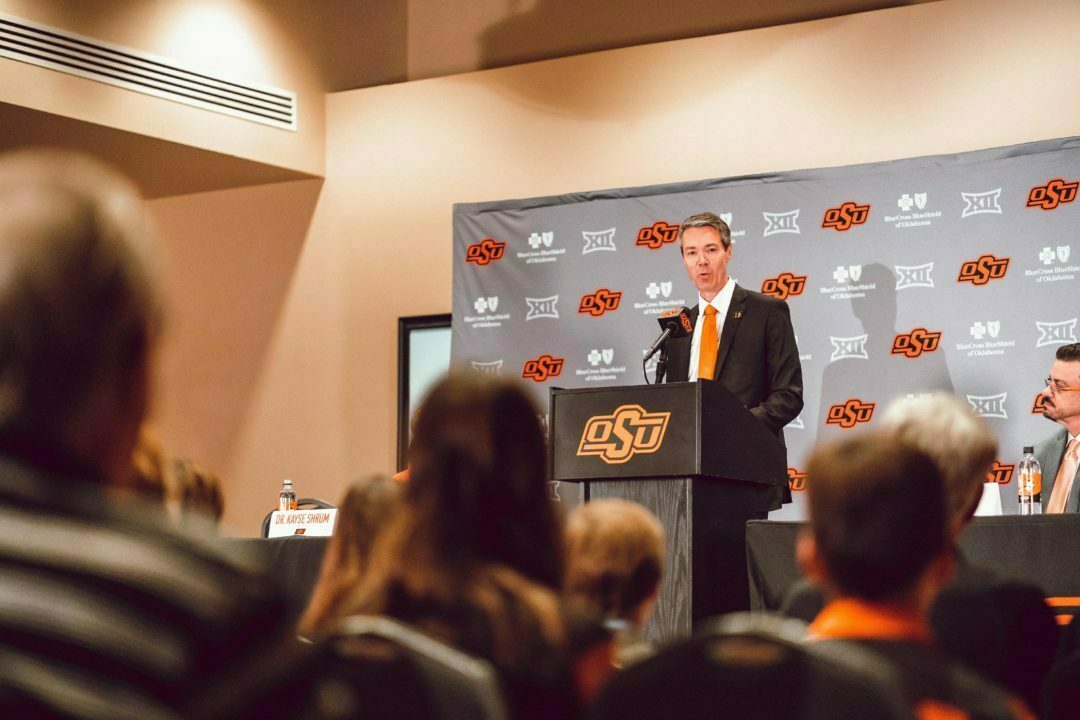 STILLWATER — Chad Weiberg is only months on the job as Oklahoma State’s athletic director, and he has already had to deal with COVID, conference realignment, NIL and now the NCAA throwing the book at his basketball program.

The NCAA denied Oklahoma State’s appeal Wednesday, meaning the Cowboys are ineligible for the 2022 NCAA Tournament, among other sanctions. After the news broke, Weiberg and OSU coach Mike Boynton held a press conference. Here is what Weiberg said.

“I am profoundly disappointed, dismayed, disgusted by the NCAA’s decision. After a four and a half year process, a process that took over twice as long as the FBI’s original investigation. To use this flawed and inconsistent process to take away the opportunity of postseason and the NCAA Tournament from student-athletes that have nothing whatsoever to do with this case, proves to me that the national office has chosen to weaponize the NCAA Tournament against the very membership that has turned it into the lifeblood of the NCAA. I have a deep and fundamental disagreement with the NCAA using the Tournament in this way. It is the bad actors, those that knowingly circumvent and violate the rules, that should be punished. It is unnecessary to punish these student athletes this way, and it’s further proof that the NCAA system has disconnected and broken. Deep and drastic changes are needed to create a better, more consistent and fair model.

“We began this process with the NCAA before Coach (Mike) Boynton had the opportunity to coach his first game as a head coach at Oklahoma State. And this week, we enter his fifth season. He has recruited and coached every single game with this investigation, infractions and appeals process taking place. It has not stopped or even slowed him and this Cowboy basketball program. This decision today will not either. I want every OSU fan to know that we take playing by the rules very seriously. We will continue to do so.

“Upon learning of the FBI’s evidence we never disputed that we employed the person that was operating outside our system and outside the rules. We took immediate action to remove him and began cooperating with the NCAA. Because of that, I’m very concerned that today’s decision will send a very chilling message to the NCAA membership that cooperating in an investigation with our own governing body is not in your best interest. What message does it send to the membership that you can receive a postseason ban regardless of the fact the findings found no lack of institutional control, no head coach responsibility, no failure to monitor, no academic fraud or misconduct, no participation of ineligible players as a result of violations and no recruiting violation, a decision we believe has never happened before in the history of the NCAA. What is the membership to make of a postseason ban for student-athletes five seasons after the fact because of a rogue employee who was acting solely on behalf of his personal self interest, went to great lengths to hide it from his employer and resulted in zero advantages in recruiting or competing for the institution. It seems to me if it were applied consistently, the message the NCAA is sending to the membership is a new standard. Of course, it remains to be seen that this new standard will be applied consistently. Only time will tell and we will be watching.

“In closing, I know I’m joined by our alumni and fans in saying that I’m as proud today of Cowboy basketball, Coach Boynton and these student-athletes as I’ve ever been. I know the entire OSU family joins me in thanking Coach Boynton for his leadership and the way he and his program represents our institution. I know we will rally around and get behind Coach Boynton and his team. We start the season on Friday, and look forward to having everyone back in Gallagher-Iba Arena this year. The future of this program remains bright. Great things are ahead for Cowboy basketball.”

“We haven’t. We’ve asked for clarification, we’ve asked what is an institution supposed to do different? Our understanding is that that is part of the infractions process, is being able to know what it is that you did wrong, be able to fix it and to be able to send a message to the rest of the membership that this is what you’ve got to be aware of, try to avoid, do different, whatever. I don’t know what the message is because as far as I can tell, the only thing that we did was hire him and we did not know that this was going on. Started at another institution, continued once he got here, I assume it would have kept going at another institution had he left to go there. But he was very good at hiding it. We have all of our systems in place to monitor everything that we can. The committee said there was no lack of institutional control, no failure to monitor, so I don’t know what we could have done different, were supposed to do different, but that seems to me to be the new standard that we’re talking about here.”

“Not about this, I mean, this is all so new. I’m sure there would be people that would be willing to help and agree with maybe that, you know what’s taken place in Tennessee. I think everyone believes the NCAA process is broken and flawed. That’s why we’re having a constitutional convention, right? There’s going to be this kind of discussion then. I don’t think that there’s very many people out there that would disagree with the fact that this is broken, this is flawed. I guess. While there is nothing in the process that is allowed for us to change this, it can be changed. There’s all kinds of instances, I think, where the national office changes what has been done. We’ve been through, feels like two years of that very kind of thing happening, where the process does not come to the right result. There has to be a mechanism for it to be corrected and changed. I believe that’s in there somewhere. I don’t know that we’ll be able to get to it. I don’t know that we’ll be able to get to it in time for this team, and this season, but that’s the kind of thing that we’ve got to address in this process.”

On if the NCAA appeals committee looked at the right aspects

“I feel like what I read in that, I feel like the appeals committee had problems with what the infractions panel did and instead of getting any kind of benefit of the doubt for what came out of the infractions panel for us, it’s like all of the benefit of the doubt went to them. Like Coach Boynton says, it is easy for them to sit in a room and do when they don’t have to look at student athletes in the face. That is who this impacts and who this affects. Oklahoma State has been here for 130 years, and we’ve played basketball most of that time. We’ll be here for beyond the next 130 years, and we’ll be playing basketball for that time. These student athletes have four chances to do this, and they sat in that room and just took one of them away from them, and that is wrong.”

On what his emotions are at this time of the decision

“Obviously went through all those emotions yesterday when we got the news, and then I think I wondered if I would wake up feeling any different this morning. Well, I think I felt worse, more upset, more confused, more sad. All those emotions. It was just more because I think for me, it’s the inconsistencies of the process, and the way that it is set up. It is just very inconsistent. And when it results in something that impacts the students-athletes like this is, it is a complete disconnect from what we’re supposed to be here doing.”

On what he tells the current Oklahoma State players

“I think we talk about there’s a lot of things that happen over the course of your life and the course of your career that are outside of your control. You didn’t have anything to do with it, so you’ve just got to stay focused on the things that you can control. Control how you respond to them, I think that’s exactly what Coach Boynton and then the team will focus on.”

“That is all tied up — and Kevin Fite and our staff can probably give you a lot more detail about that — but in the mitigating and aggravating factors on how the process plays out, and again, there’s just inconsistencies if you look at what schools are awarded in mitigating factors versus aggravating factors and all that, there’s no consistency in the way that is just done. So, we all are aware of the history of this, but again, we’re going to use something that happened 25-30 or more years ago here at OSU to punish this basketball team, these 17 student-athletes? That is a very flawed process.”

On if there is any regret in cooperating with the NCAA

“I hope that we never have to go through anything like this again, obviously, but if we do, we will do things differently.”

“I was hopeful. I was optimistic that all of that would be taken into account. Of course, we were wondering why it was taking so long. You hoped that that was maybe a positive thing that it was taking long, but we didn’t know. But it appears to me, no. I mean, we got no credit for any of that. We, in a lot of ways, have been punished this entire time, yet if you look at the ruling, it references that our probation period started yesterday. So, by the time we get through this, we will have in effect been under some sort of punishment for almost nine years.”

“There has been a lot of discussion. Without going into all the details, there is a constitutional committee that’s been formed to start the process. This is a huge undertaking, right? But to start the process of looking at what needs to change, and this infraction’s enforcement, all of that is certainly one of them. We’ve all known that this has been a frustrating, inconsistent, flawed process for a long time. How we got there you can argue about or whatever, but I think there’s a lot of agreement that it’s broken and needs to be fixed. What that looks like, how that happens? I don’t know yet. I just look forward to being part of a thought process to the degree that we can and hope for serious reform because it’s clear that it’s needed. The student-athletes have to be the ones that are the center of the decisions that we make. If we want to get serious about playing on a level playing field then let’s monitor and punish the ones that knowingly break the rules that we have in place and not student-athletes that were seventh graders when it happened.”

“I talked to Bob yesterday, and we had that conversation. I don’t I don’t want to give any false hope also because I don’t know where that process is going to go. The last thing we need is to have another hope and disappointment. I appreciate the commissioner being willing to explore that. We’ll see where it goes. I think there’s some reconciliation that would need to happen with the NCAA over that. So, this is, I think, new territory for commissioner Bowlsby just like it is for us. We’ll certainly work with him through that process and see where that goes.”