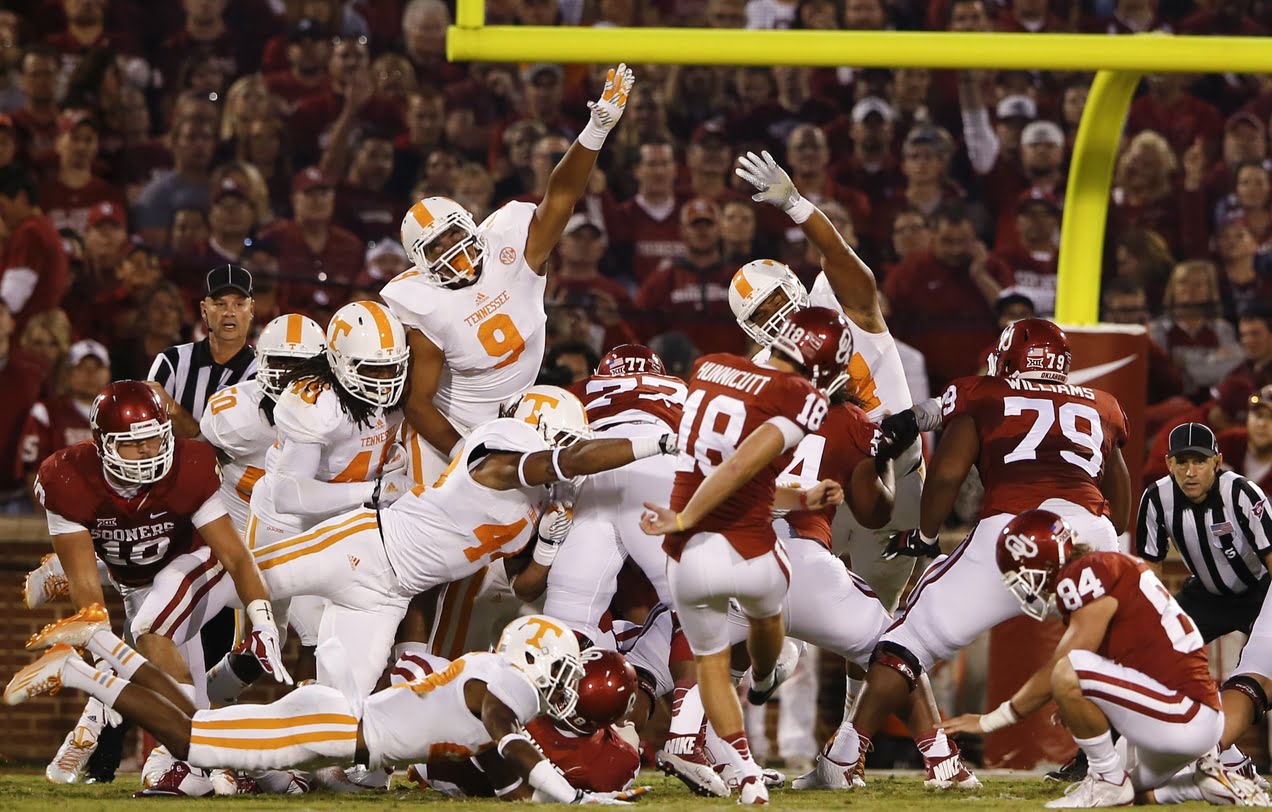 In standard ESPN fantasy leagues, kickers can make-or-break your week (much like in real life). In keeping with the fantasy power rankings we’ve done this season, I decided to take a look at Big 12 kickers through three weeks and determine their hypothetical fantasy worth.

Disclaimer: You probably won’t agree with this. But it’s math.

Wyman has been bad in his own right, but his offense/team in general doesn’t do much of anything to help him out. He’s connected on 3 of 6 field goal attempts, with only one of those coming from beyond 40 yards. Making matters worse, he’s only gotten to boot 4 PATs.

Texas hasn’t been great, so it comes as no surprise to see a struggling kicker. Connecting on only half of his kicks thus far, Nick Rose is a terrifying sight for Longhorn fans.

I could go on, but a quick Twitter search of Rose’s name produced this….and I think it says more than enough.

Thank goodness for PATs, because Bustin would be essentially useless without them. He’s connected on one field goal from a whopping 28 yards, but in all fairness, has only been afforded one other opportunity to show his stuff.

Cole Netten is likely the most popular guy in Ames this week, which I imagine feels about as prestigious as the time I won class president while running unopposed. His 47 yard game-winner against Iowa was huge on Saturday, and gave the Cyclones a rare reason to celebrate. Good for you, Cole. Good for you.

This one is interesting because Callahan was actually in the negative numbers until I factored in PATs. This guy is 1/5 with a long of 23 yards….let that sink in. Seems like another great opportunity to let a Baylor fan tell the story on this one.

Cantele is in an interesting situation, because it seems like the Wildcat fans actually like him. He’s 4/5 on the season, with his only miss coming from beyond 40 yards.

We’ll see how things go on Thursday night against Auburn, though. One misstep and the masses will chase you out of town, Jack.

Oberkrum is perfect on the season, so saying anything rude would just be unnecessary at this point. What I WILL say is that I fear Horned Frog fans are off their rocker a little bit.

A Twitter search revealed that a #OberkromHeismanCampaign hash tag exists, and while I assume it’s all in good fun, this madness needs to just stop immediately.

His success rate isn’t wonderful, but five of Lambert’s eight attempts so far have come from 40+ yards. He’s connected on three of them, so if you’re looking for where his points come from—there you have it.

He’s also big man on campus this week, as his game-winning field goal beat Maryland on Saturday. Good for you, Josh. But your new nickname is really terrible.

With a long of 39, Hunnicutt isn’t no. 2 on this list because of his ability to knock down kicks. Instead, OU is scoring enough for him to score the majority of his points on PATs.

He did have a nifty streak of 12 consecutive makes going back to last season, but that streak ended on Saturday when Tennessee was able to block one. Bum deal.

Cowboy faithful are going to destroy me for this, but like I said earlier, math is math. Grogan has attempted and made more field goals than any other Big 12 kicker, while also knocking down 12/12 extra points.

The mere mention of his name is enough to make Poke fans groan, but in terms of scoring ability he’s been great. As of right now, he’s tied with OU running back Keith Ford for the top scorer in the Big 12. All that said, this still sums up Cowboy sentiment so far:

Ben Grogan made a 47 yard field goal. I don't understand my life anymore.