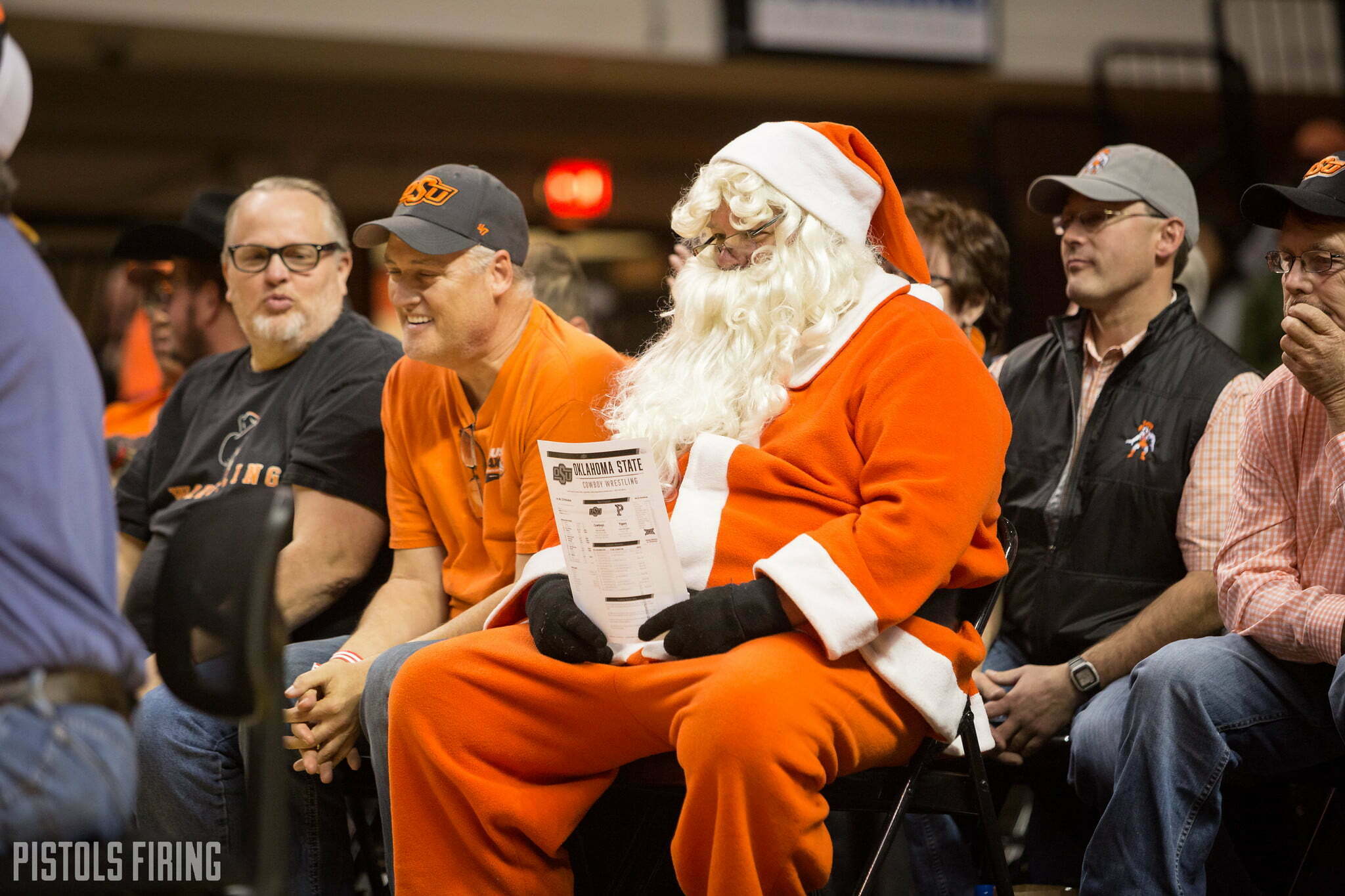 For anyone who has been following my writing for a while, there’s a pretty concentrated effort to do some sort of holiday themed writing each year. This year, I thought I’d go the direction of celebrating “Festivus,” which is traditionally celebrated today.

For those of you who are not Seinfield fans (are there people out there that actually fall into this category?), Festivus is a made up holiday from the show that was created by George’s dad, who was frustrated with Christmas after getting in a fight over a toy he was trying to purchase for his son at Christmas.

So, I thought I’d come up with a bit of a Festivus-themed story on Oklahoma State wrestling for Cowboy fans.

In the show, Festivus does not have a tree like a traditional Christmas. Frank states that he finds tinsel and Christmas tree decoration distracting. To me, this is the Oklahoma State wrestling room. It’s like the university has decided that lavished decorations are a distraction instead of a tool for recruiting and training. While a number of top programs across the country have built, or are building, lavish wrestling facilities, i.e. beautifully decorated Christmas trees vs. an aluminum pole, Oklahoma State has the same wrestling room it has had for years and a hand-me-down locker room from the soccer program.

The Airing of Grievances

I try to put a pretty positive tone on most of my writing, but “I’ve got a lot of problems with you people, and now you’re going to hear about it!”

Facilities — I opened this up with the comparing Oklahoma State’s wrestling room to a pole and other programs to a big, brightly decorated Christmas tree. But in a more serious tone, it’s a legitimate gripe and something that’s undoubtedly holding the program back a bit.

Penn State has a much larger and more impressive room. Iowa is building a new room. Even South Dakota State has announced plans for a wrestling facility that will dwarf Oklahoma State’s once built. Oklahoma State has indicated it’s something they want to do, but there’s not been much movement on it. And with COVID-19’s impact on college sports, it’s probably now even further away. OSU’s current room is subpar by most standards. For a program as successful as Oklahoma State, it’s mindboggling that the Cowboys don’t have something better, and when you look at everything else that’s been built on campus, it’s just frustrating for wrestling fans.

National Titles — The Cowboys haven’t won a National title since 2006 and that’s a long gap when you look at the history of Oklahoma State wrestling. When you step back and look at it, there are a lot of factors that have played a role.

Oklahoma State has poured a lot of money into the development of other sports during that period, while wrestling has taken a bit of a back seat. The rise of Penn State and Cael Sanderson has probably been No. 1, but most notable to me is recruiting. OSU just simply didn’t do a very good job at it for a pretty long period. They’ve changed around their staff, and that seems to have changed recruiting dramatically. The classes that OSU has brought in the last few years and just signed this year are very good and hopefully will take this off my list of grievances soon.

Fans/Crowds — I sorta cringe when saying this, as obviously it’s not directly aimed at most Oklahoma State fans and certainly not ones that passionately follow the program and are likely reading this. I have a lot of interaction with all of you, and there’s no doubt that Oklahoma State wrestling has some great fans and wonderful supporters out there.

This is sort of aimed as me speaking from the standpoint of the avid Oklahoma State wrestling fan. In shear numbers, the attendance and fanbase size of Oklahoma State wrestling hardly compares to what Iowa and Penn State pulls in and is usually less than Ohio State, Rutgers and others as well. There are a number of factors at play. Proximity to high-population areas, the Big 12 schedules vs. the Big 10 schedules, marketing and more. Naturally, that won’t matter this season with limited crowds due to COVID-19, but at the end of the day, OSU is not hitting the mark comparative to these other programs. Thankfully it is trending in a better direction in Stillwater currently and will hopefully continue that way once we get out of this current Twilight Zone episode we’re living in.

After the meal at Festivus is the Feats of Strength. Festivus not over until the head of the household is wrestled to the floor and pinned. This is an event that would probably be pretty easily won by most Oklahoma State wrestlers at home for the holidays.

You know one household that it would be interesting to see the feats of strength in? The Ferrari family’s.

The eldest AJ, is a freshman at OSU and his younger brother, Anthony, is committed for the class of 2022. They have another superstar in the making in high school freshman Angelo, who presumably will come to OSU with his brothers. They are workout junkies, and you can see plenty Feats of Strength on any of their social media pages.

Hope you all enjoy this Festivus and the rest of your holiday season. I’m looking forward to another year of covering the Cowboys with you and really consider myself blessed to do it.