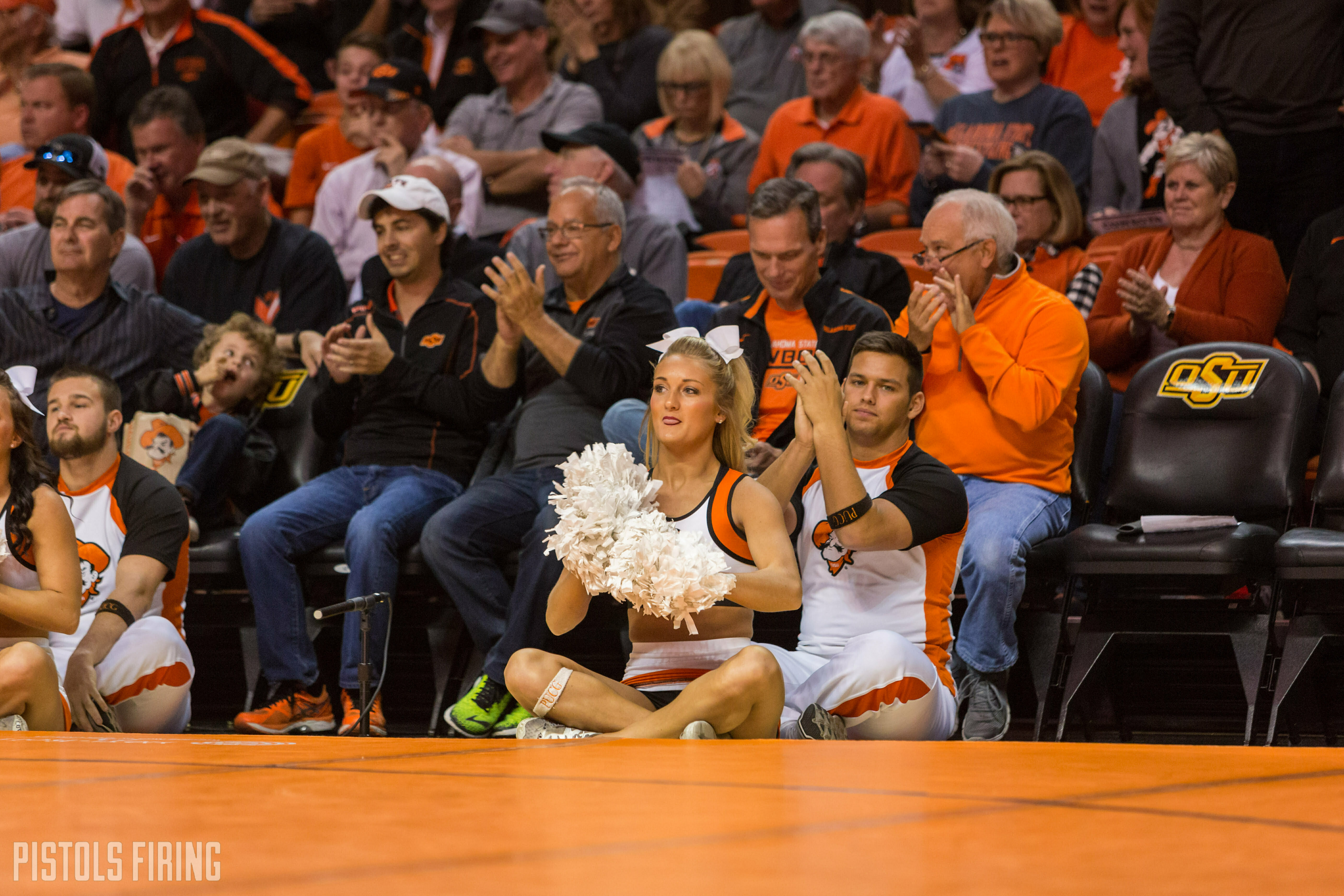 I wrote a few weeks ago that OSU wrestling attendance has improved this season and is on pace to outdo last year’s numbers. In that research, I discovered that a nationally televised Bedlam dual with 6,836 attendees was the most attended athletic event on the campus of Oklahoma State University or the University of Oklahoma this school year that was not a football game.

This was prior to OU playing Creighton in its final non-conference home game, which had an estimated attendance of 4,480. So unless OSU basketball vs. Texas A&M Corpus Christi outdraws Bedlam wrestling, which is pretty unlikely considering this picture below was the crowd 10 minutes before tip in its last game vs. Central Arkansas, Bedlam wrestling will outdraw all non-conference basketball for the state’s two flagship universities this season.

Happy to cover the #OKState vs. Central Arkansas men’s basketball game for @tulsaworld and @ocollysports. We’re 10 minutes away from tipoff at GIA. pic.twitter.com/ura6OjG3he

Meanwhile, Division I basketball attendance is trending in a different direction. Average attendance nationally has gone down every year since 2007, according to attendance records. Most know Oklahoma State is not exempt and has had attendance issues since the Eddie Sutton era. A lot of different fingers are pointed at why that is happening at OSU. It’s down across the board, and many believe the Thunder, TV availability, fan travel, performance, and many other things have driven that shift.

Wrestling, unlike basketball, is not a revenue sport. Even at OSU with a tradition-rich program, it is not likely to reach that popularity level any time soon. But college basketball in the state of Oklahoma is seemingly swimming upstream in its effort to get fans back in arenas. OSU wrestling does not have to fight those same battles.

Oklahoma State is a consensus top-5 program that is a little behind Penn State currently, but is probably never going to be out of the top five. It also has a wealth of support. It helps that OSU fans are never going to be watching a product that lacks talent or skill. It’s an entirely different sport, so it doesn’t have to battle with the Thunder for fans, too, whereas men’s and women’s basketball, to an extent, do.

OSU wrestling is the premier program in the state for this sport. If you’re an in-state wrestling fan, you’re probably an Oklahoma State fan. Also only about half of their events are available on TV, so fans really only have two options to watch. They can buy a subscription from FloWrestling or they can attend in person.

Though there are other avenues of marketing a team, one of the biggest tools in that regard for an athletic department is their social media accounts. The individuals that operates the social media accounts specifically assigned to wrestling do a really good job in my opinion. The graphics, videos and tweets are all usually on point and do a good job selling OSU wrestling as a product.

Naturally, the accounts assigned to the entire athletic department have the biggest reach though. I decided to go look at the OSU athletic Twitter/Facebook accounts vs. the ones specific to wrestling and compare what sports they tweet/post about the most. Since this story is focused towards wrestling I started on November 17, the date of the first dual, and worked up to today to get these numbers. I left out football since as we all know it is the cash cow of college athletics and should be sold more than any other product available.

Here are the number of times the main page of the OSU athletics Twitter and Facebook accounts posted about various sports.

The main OSU athletic department Twitter account tweeted or retweeted about wrestling a total of four times in the span of time I looked at it and posted nothing about wrestling on its Facebook page. Social media is not the ultimate mark for what an athletic department does to put butts in seats or get eyeballs on television, but I would argue it’s telling of the overall effort.

They could be advertising in other areas that I’m simply not aware of — radio, TV, etc. — but as a guy that lives in Stillwater, I really don’t see it much. It’s perplexing why OSU would do so little in that regard to promote its best performing product outside of golf, especially considering the revenue opportunity. It’s doing more on sports that aren’t even in season than with wrestling.

The thing about all of this is that when OSU promotes wrestling, it works. OSU tweeted out a video of Mike Gundy in a singlet a few years ago and set a GIA attendance record; in contrast, this year OSU didn’t post anything in advance of the Bedlam dual on its main social media account. Think a few casual fans that otherwise don’t care about wrestling might be interested in watching OSU dominate OU in something? I would think so. But they’d have to be aware that it’s going to happen to know to attend.

Mike Holder said last year that as an athletic department OSU has taken wrestling for granted. He doesn’t seem to be wrong. They may also be missing out on one of their best opportunities for growth in revenue, ticket sales, and attendance.