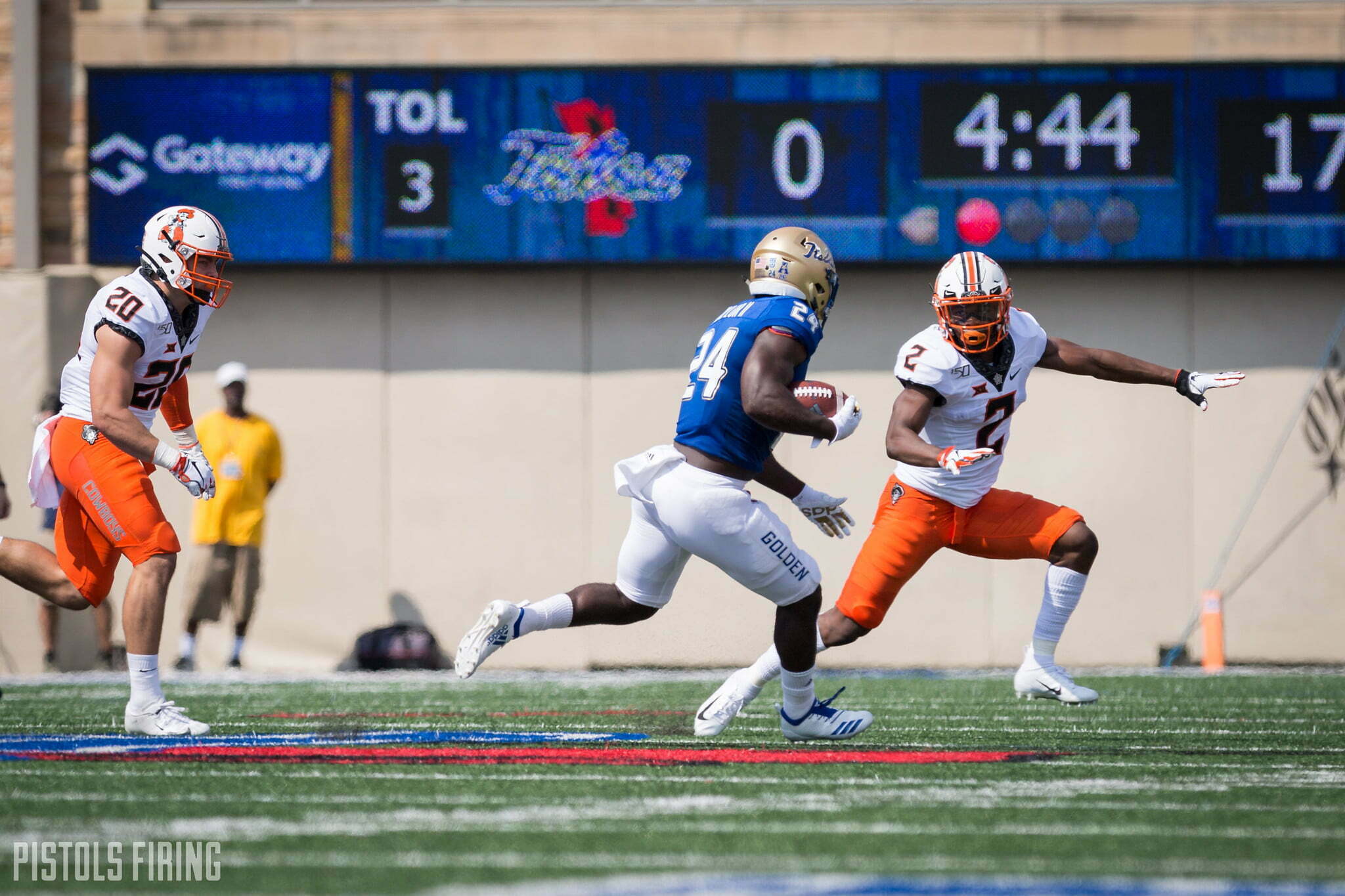 The Oklahoma State Cowboys are preparing to take on the Tulsa Golden Hurricane this Saturday in their 2020 season opener. Before the Cowboys take on TU, I wanted to preview the Tulsa offense and what they may try to do on Saturday to put points on the board.

Head coach Philip Montgomery has the Golden Hurricane running his style of offense for the sixth straight season. Montgomery coached alongside former Houston and Baylor head coach Art Briles for 16 seasons, including at the high school level. Montgomery’s offensive style is based primarily off Briles’ philosophy and he’s used it to create some pretty powerful offenses during his tenure at Tulsa.

Before we get into Montgomery’s offense, let’s talk a little about Briles’ style of play. The primary goal of the Briles’ “Veer-and-Shoot” is to spread the defense out by having the wideouts split as far as possible to the sideline, allowing the quarterback to more easily read the defense and open things up for both the passing and rushing attack. Below you’ll see an image of Baylor’s wide receiver splits.

In the image above, the outside receiver to the top of the screen almost on the sideline and the slot receiver is outside the hash marks. These splits allow the offense to isolate certain areas of the field. The opponent has to decide whether they will commit to the run and keep their guys in the box, or widen out and leave themselves vulnerable up the middle.

Montgomery’s offense is a particularly nasty variety of smashmouth spread, a run-centric offense in which the OL is moving downhill on virtually every snap. Smashmouth spread concepts feature running plays with a double team and/or lead blocker at the point of attack and then a perimeter option for the QB to use to punish the defense trying to bring numbers to the point of attack. The goal is overpower opponents with the run game but with constraints attached to prevent the defense from stopping it.

The “veer and shoot” version of this offense that Montgomery employs tends to employ more vertical shots and a faster pace than the more ball control varieties that you see in other locales, but the main problems presented are the same, Tulsa just attacks weak spots harder than many other teams.

Montgomery tries to keep the offense pretty simple overall. As I mentioned above, they will look for a numbers advantage and try to exploit it. TU will mainly base out of 10 (1 running back and no tight ends) and 11 (one running back and one tight end) sets. Additionally, Tulsa uses a decent amount of run-pass options (RPOs) to help keep their opponents guessing.

TU also likes to play with tempo, ranking second in the nation in plays per game last season with 82.2. Last year against OSU, Tulsa was able to increase their pace on two long drives in the second quarter, wearing down the Cowboy defense and finding the end zone both times.

Below I’ll take a look at some ways the Golden Hurricane may try to attack the Pokes in this year’s contest. Since they haven’t played yet this season, I went back and watched last year’s OSU/TU game, as well as the Cincinnati/TU game, as the Bearcats also primarily base out of a three down defensive linemen look like the Cowboys.

I think it’s also important to note that a lot of key players are back from last season for Tulsa, including quarterback Zach Smith, running backs Shamari Brooks (rushed for 107 yards last year against OSU) and Corey Taylor, as well as most of their receivers and offensive linemen.

Unless Montgomery has made serious changes to the offense, you will most likely see some form of this play on Saturday. It features the wide splits from the receivers I discussed earlier in this post and looks to exploit a numbers mismatch. In the diagram below you’ll see Tulsa is using a pulling guard Power run scheme. This is normally a run-first play, but if the QB sees a numbers advantage in the passing game, he can throw to one of the quick routes on the outside.

On this particular play, also shown in the following video from the 2019 Cincy game, TU likes the numbers match up inside, they have five blockers going up against four Bearcat defenders in the box, or close to the line of scrimmage, so Smith hands it off to his running back.

Next, you’ll see a similar play, this time with the tackle pulling instead of the guard. As the video explains below, Smith now gets a favorable look to throw the quick pass.

They will run it out of multiple different formations, as you see in the below clip from last year’s OSU/TU game.

This one play has so many different route tags and run blocking schemes that can be changed around that it actually turns into a bunch of different plays and is a good chunk of the TU offense. When the Golden Hurricane got moving with tempo last year against the Pokes, this play was utilized heavily and wore down the OSU defense.

If the Cowboy defensive backs can man up on the Tulsa wideouts, this will allow OSU to keep additional defenders in the box to help slow down TU’s talented running backs.

Last season against the Cowboys, Tulsa used a lot of stacked receiver sets, as you’ll see in the image below.

Tulsa also ran several different hi-lo passing concepts. On these plays, the offense will target a defender and put one route in front and one route behind him, causing him to make a decision. This is typically a zone beating concept. Below you’ll see former Cowboy cornerback A.J. Green put into conflict last season.

Then, after using this concept a couple of times, Tulsa has the receivers running the corner routes use double moves, catching the Cowboy defense guessing and beating them deep.

Tulsa also went to different variations of “Mesh“, in which two receivers will run shallow crossing routes trying to “pick” the others defender, several times against OSU. An example shown in the diagram below.

And, they will often look to throw it deep if they get a single-high safety look.

There aren’t typically many straight drop back passing plays in this offense, there is normally some form of play-action or it will be an RPO, but you will see some on occasion as shown above.

In the second half of last season’s game against Tulsa, the Cowboys started to bring more pressure. This, paired with better play from their defensive backs, slowed down the TU offense and resulted in a second half shutout. I expect OSU to come out aggressive this Saturday and I believe it will be an impressive showing from Jim Knowles and company.