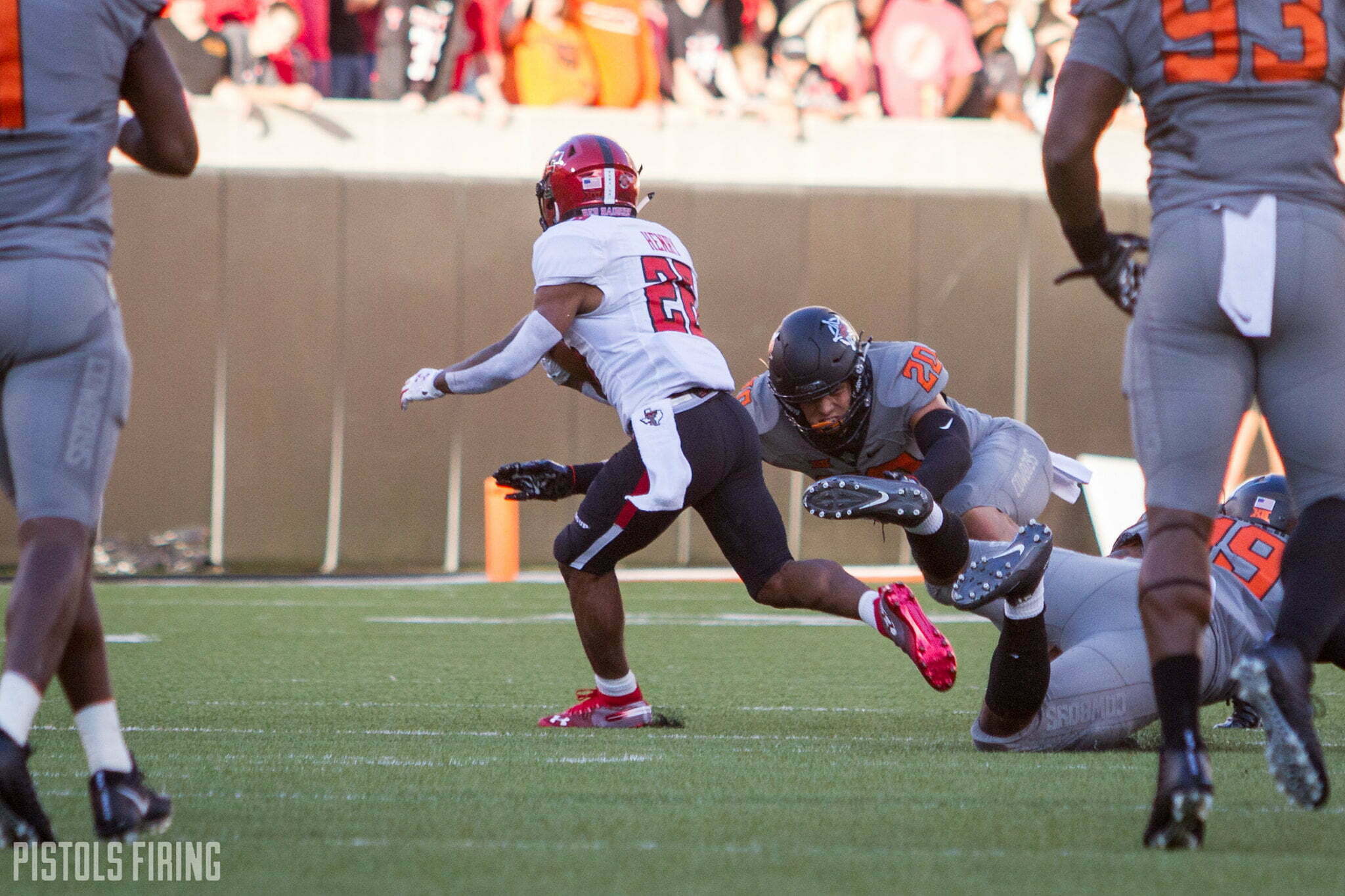 Oklahoma State heads to Lubbock this weekend to take on a struggling Texas Tech Red Raider squad. First-year head coach Matt Wells watched his starting quarterback Alan Bowman go down with a shoulder injury during his team’s 28-14 loss to Arizona, and although he will probably return at some point this season, it most likely won’t be against the Cowboys.

Wells and first-year offensive coordinator David Yost will look for ways to score with junior quarterback Jett Duffey now leading the way for TTU. Yost spent time running the offenses for Utah State (also under Wells) and Missouri, while also making stops at Oregon and Washington State. His style is a “power spread’ type of football, with some air raid principles sprinkled in from his time working with guys like Mike Leach. With Duffey taking the reigns of this offense, it gives Yost the addition of the quarterback running game, which he doesn’t mind implementing into his scheme. However, as we saw against the Sooners, Duffey has shown some inaccuracy in the passing game.

For this post, I wanted to take you through what we may see from the Red Raider rushing attack as they take on OSU this Saturday. All of the clips shown in this article come from Texas Tech’s last game against OU. I chose this game because it’s the only game Duffey has played a meaningful role in so far this season. The Red Raiders started the game with Rice graduate transfer Jackson Tyner at QB, but after a poor performance on his first two drives of the game, Wells and Yost decided to give Duffey a try.

Yost’s offense primarily bases out of 11 personnel (one running back and one tight end) with a versatile tight end who can split out wide but also contribute as a blocker in the running game. Their go-to formation against the Sooners was a three receiver look with the tight end at H-back, shown below. 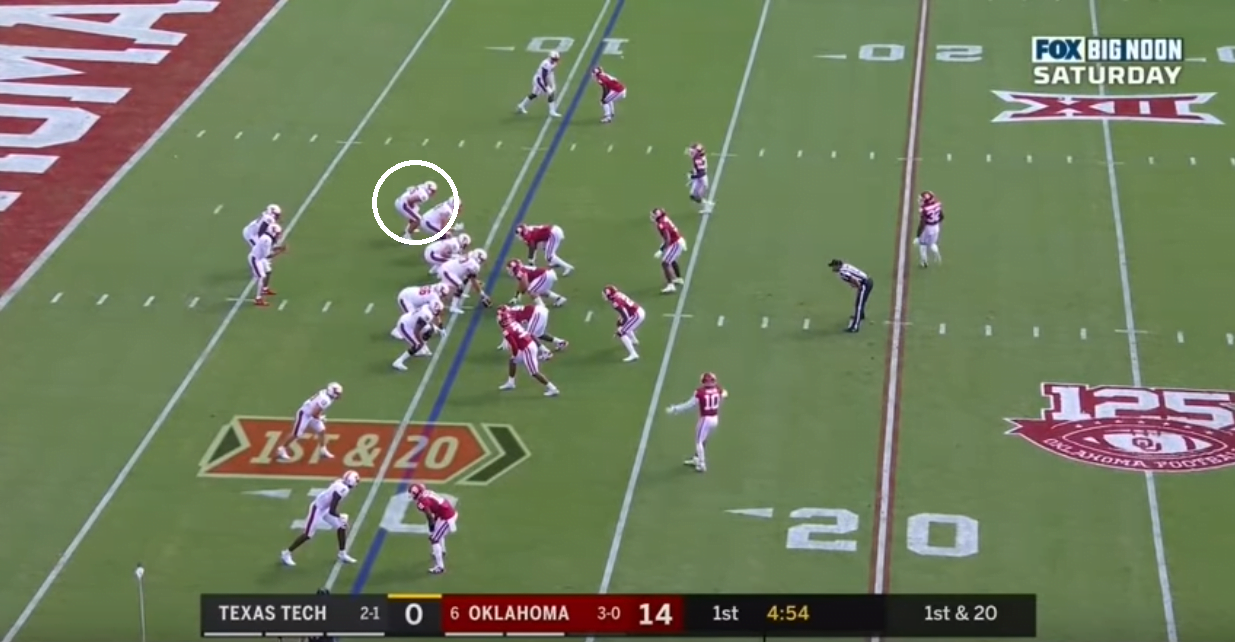 Their go to running play out of this formation, and pretty much out of any formation, is Zone. We’ve talked about about Zone blocking schemes in the OSU offense in recent weeks, but as a reminder, this refers to offensive linemen blocking specific gaps instead of a certain defender. If an O-lineman has a defender lined up in front of him, he blocks him. If he doesn’t have a defender lined up in front of him, then he steps toward the play side and either helps double team block a defender or moves to the second level.

The type of Zone concept that Yost likes to run with this TTU offense is a Zone Slice. In the Zone Slice, the H-back will move away from the play side, opposite the offensive linemen, and block the defender on the backside. An example of this is shown in the diagram below from footballstudyhall.com. 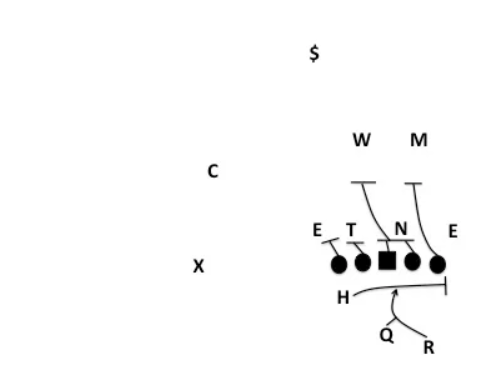 As you see in the above image, this “slice” block by the H-back allows the offensive tackle (to the right of the line in the diagram) to move up to the second level and block a linebacker. It also allows the tackle to assist with double team blocks if the defense has a dominating tackle on their side. We see an example of this play below from the Red Raiders.

Something else Yost will run off this look is Zone Bluff. On this play, the H-back will “bluff” the “slice” block shown above. By “bluff”, I mean he will go around the backside defensive end, who is the Duffey’s read on the play below, and take the first defender on the outside. See the diagram below from usafootball.com for further detail. 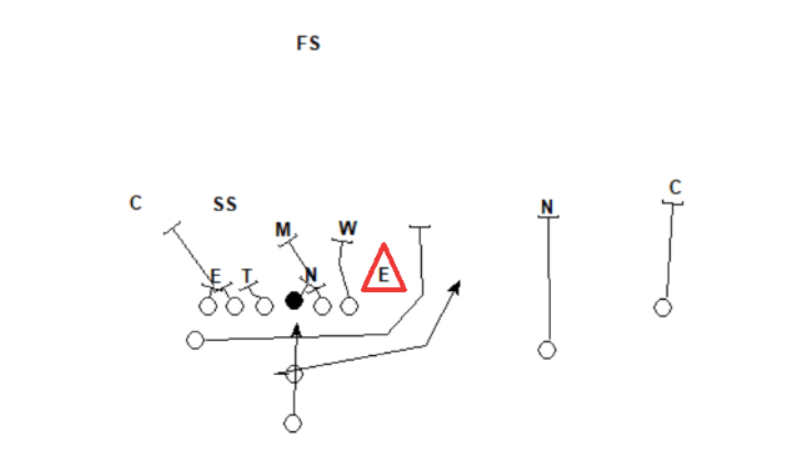 If the defensive end, outlined in a triangle in the picture above, shoots in towards the running back, the QB (which is Duffey in the image below) will keep the ball with the H-back as his lead blocker.

They’ll also throw in the some play action off this play.

Other than Zone, the main running play I saw from Texas Tech was Power, which has backside guard pulling around to lead block through the hole (shown below).

Outside of Zone and Power, Yost has utilized counter runs at his previous coaching stops, but I didn’t see much of that against OU. He also likes to utilize quick swing screens to the running backs and “Now” slot receiver screens, almost as an extended part of his running game.