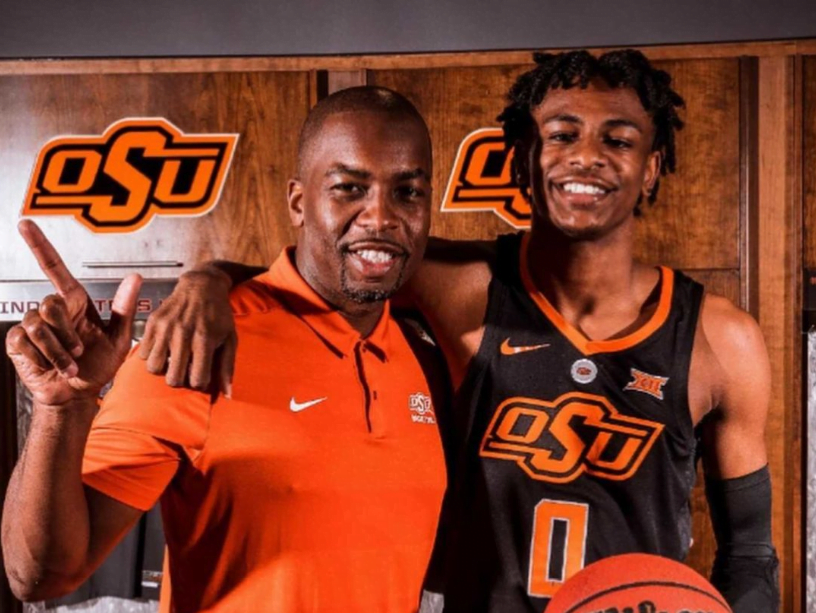 You’ll notice in the image above that Walker is listed at 6-2, 160 pounds. However, he came in much taller and slightly heavier when he was officially measured in Stillwater, as he’s listed on the Oklahoma State roster at 6-4, 170 pounds. The talented combo guard finished his final season with the PC West Patriots averaging 25.8 points, 5.1 rebounds, 3.2 assists and 4.1 steals per game. Walker also recorded 12.4 points, 4.3 rebounds, 3.0 assists and 1.4 steals per game while teaming up with fellow Cowboys Cade Cunningham and Montreal Pena as a member of the Texas Titans AAU team. In addition, he was named to the The Oklahoman‘s 2020 Super 5 First Team.

I was able to watch 6A PC West’s regular season matchup against Tulsa Union (17-4 record) and a playoff game against Edmond North (17-6 record), as well as two Texas Titans games as they took on the Mac Irvin Fire and Team Final.

Walker has a ton of athleticism to go with his lengthy frame that he utilized on both ends of the court. He recently recorded a 39.5 inch vertical when measured by the OSU staff in early July. It’s easy to see how athletically gifted a player Walker is when he takes off in transition. And, it’s not just his leaping ability, but his speed and balance. Below you’ll see Walker make the steal on one end and then finish with a dunk on the other.

Walker’s height and wingspan are ideal for the combo guard-type role he will be playing at Oklahoma State. However, I do think he will need to add some muscle during his time with the Pokes. It’s not so much that he’s listed at 170 pounds, because we’ve seen guys at his height and weight excel in college and even in the NBA, but I do think he will need to get stronger if he wants to fully reach his potential on both sides of the floor.

The first thing that stood out to me about Walker’s offensive game is his shot making ability. He can get his shot off quick, has a smooth shooting motion and if he gets hot he’s not afraid to continue firing it up from 3-point range. In the clip below you’ll see Walker knock down a deep ball against Union.

The OKC native also has experience playing both guard positions. For PC West, he primarily played off the ball in the two games I watched, but the Pirates still ran their offense through Walker a majority of the time. On the other hand, for the Texas Titans Walker played point guard on occasion and showed he’s comfortable running the show. Having skills at the point guard spot, along with experience in the shooting guard role is nice versatility for coach Mike Boynton’s squad heading into the future.

Walker also showed that he’s not only a scorer, but he can facilitate as well. Below you’ll see him make a nice pass out of a pick-and-pop situation.

Additionally, here’s Walker making a nice pass up the court on the fast break.

To go along with his passing and shooting skills, Walker is a capable ball-handler who doesn’t often turn it over or make careless mistakes. I don’t see any glaring weaknesses in Walker’s offensive game, but as I mentioned above, I think once he adds some strength he can really take his game to the next level by doing things like finishing through contact in the lane and posting up smaller guards.

Walker brings the energy on the defensive side of the floor. Along with breaking the scoring record at PC West, he also holds the record for most career steals. In the following video Walker get the steal and then the bucket on the other end against Edmond North.

He uses his relentless energy and length to really bother shooters, and he is a great overall on-ball defender. For the Texas Titans he would spend a lot of time guarding the other team’s primary ball handler and did well when put in these situations. He also is a solid shot blocker for a guard, and I think he will probably record a chase down block or two in transition for the Cowboys.

The only real area of improvement in terms of defense for Walker is maybe just continuing to improve as a team defender. He sometimes would get out of position and be solely focused on his man, but I’m not worried about this as Walker will be learning from a great defensive coach in Boynton.