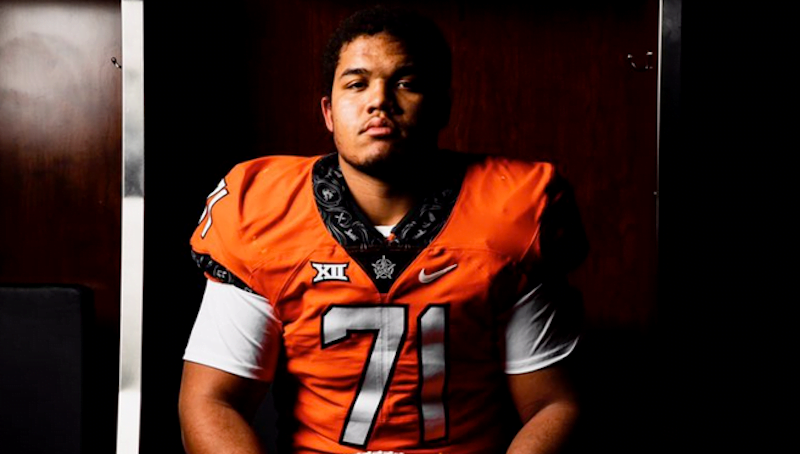 Leading up to this past football season, I broke down Oklahoma State’s 2020 recruiting class through a series of film studies. With the season officially in the books, I am going to start my analysis of the 2021 class. First up is the highest-rated player of the group, four-star defensive lineman Aden Kelley.

Kelley had offers from Iowa State, Nebraska, Northwestern, TCU and SMU to name a few, but decided to play defensive tackle next season for coach Jim Knowles. He isn’t one of the 12 incoming recruits set to enroll next week, but when Kelley gets to campus he will surely make his presence felt. The versatile lineman dominated Class A and is prepared to take his talents to the next level.

I was able to watch Kelley play against Hooker in the regular season, a team who made it to the third round of the Class A playoffs, and his championship matchup against Cashion, along with several highlight tapes. Below I’ll breakdown some of the key areas for defensive linemen and how Kelley stacks up in each one.

In the Oklahoma Class A film I watched, Kelley was never outreached as he was far more rangy then most offensive linemen he went up against. In addition, he shows violent power in his hands, and he keeps them very active, allowing him to collapse on the offense’s point of attack. Below you’ll see an example of his strong initial punch.

Kelley already had a massive upper body, as he seems to have added more weight recently. Oklahoma State’s National Signing Day roster has him listed at 295 pounds, up from 247Sports’ listing of 275.

Although he lined up primarily on the edge of the defensive line, he has the power to be a two-gapper on the interior of OSU’s D-line and showed nice ability to shed blockers and control his gaps, as you’ll see in the video below.

It’s hard to evaluate just how strong he is, going against the type of competition he did in Class A, but with him getting into Coach Rob Glass’ program in Stillwater, I doubt this will be an area of concern moving forward.

He’s a violent tackler whose athleticism and quickness allow him to catch a ball carrier if they try to press his gap and then bounce outside. In high school, he never lost ground after his initial hit on a ball carrier. Additionally, Kelley does a solid job wrapping up, using his strong hands to grab a hold of the ball carrier and wrestle them to the ground in congested spots. In the following clip, you’ll see a nice play from him in the Cashion game.

There were multiple occasions where he displayed his hustle and non-stop motor making tackles down field, as you’ll see in the next video.

Kelley didn’t have a lot of creativity in regards to his pass rush technique. Instead, he uses his powerful hands and quick feet to gain ground and penetrate through blockers on his way to the quarterback. He regularly broke through the initial punch from the offensive linemen he faced and took good angles on his way into the backfield. Here you’ll see him get to the QB for Hooker.

Often facing multiple blockers, he was still able to use a bull-rush technique to collapse the pocket, and though the competition he was facing isn’t Power-5 caliber, I think he will still be able to do this at the next level after some time with the coaching staff at OSU. There are some areas for improvement in regards to the way he attacks the QB, but I think his athleticism displayed on the basketball court shows that he has the ability to add some things to his repertoire fairly easily.

The explosiveness off the snap was the first thing that stood out to me from watching film on Kelley. Playing both ways the whole game, you think he would slow down at some point in the second half, but he never did. In addition, he keeps his balance well through contact, as there was often a secondary blocker coming at him from a lateral angle.

Kelley did a great job of firing off the ball low, and rarely lost momentum by popping straight up out of his stance. He also does well to anticipate the snap while avoiding offsides penalties. As I mentioned above, Kelley was given the chance to be a stand-up rusher in certain situations and did well to generate good angles off out of this alignment.

Kelley was lined up all over the defensive line, however mainly on the left side as a hand-in-the-ground defensive end. I saw him mainly in three and five techniques, but he was also lined up as a stand-up edge defender and in a zero technique at nose. See the image below for further explanation on these defensive alignments.

I think Kelley has the skillset to play right away for the Cowboys, but it’s going to be pretty big jump from Oklahoma Class A to Power-5 football. In addition, the Cowboys have some solid players coming back on the defensive line such as Israel Antwine, Sione Asi, Brendon Evers and Collin Clay. I think these two factors will allow Kelley to sit a year and develop, but after that, I seeing him being a force on the OSU D for the next several years.