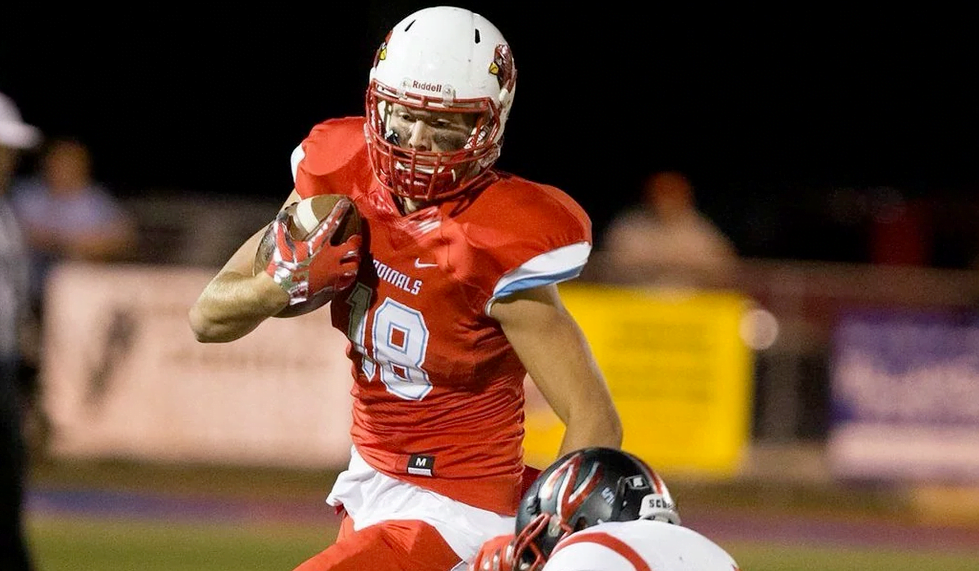 To go along with my film breakdowns of 2019 recruits Brendan Costello, Deondrick Glass and Langston Anderson, I will next take a detailed look at four-star tight end and Oklahoma State signee Grayson Boomer.

I tried to use clips from Boomer’s games against Claremore High School and Guthrie High School, both of which lost in the 5A Oklahoma High School Playoff Quarterfinals, as much as I could.  The reason I wanted to use these games is to show Boomer’s performance against higher-caliber opponents.

Boomer’s route tree was fairly basic at Collinsville High School. His assignments primarily consisted of shoot routes to the flat, 8 to 12 yard out routes, drags and shallow crossing routes, and vertical routes up the seam. He has a nice burst off the line of scrimmage, but there was some inconsistency on the burst out of his route breaks and on the precision of his cuts. However, it did seem as though Boomer was often asked to just find space in the zone coverage, so this could have something to do with the rounding of his routes.

Due to his athleticism, I think he will have the ability to easily learn new route concepts and improve his footwork. In addition, he’s very familiar with the shoot route out of the H-back position, as I mentioned above and you’ll see in the clip below.

This is something recently hired Oklahoma State offensive coordinator Sean Gleeson likes to incorporate in his game plan, as he showed during his tenure at Princeton.

The Collinsville native has a wide catch radius with his long 6-5 frame. He possesses good flexibility allowing him to make tough catches and I didn’t see many drops from the big tight end. Boomer made nice snags near the sideline on his out routes, like the one shown in the following video.

Along with his athleticism and flexibility, Boomer has strong hands which allow him to catch the ball outside his frame. He showed the ability to grab low throws and even made some diving catches like the one in the clip below.

Clocked at a 4.72 40-yard dash, Boomer doesn’t have elite top-end speed, but as I stated earlier, he gets a nice jump off the line and is a tough cover for linebackers. His speed is good enough for a tight end/Cowboy Back, and he will not only be a problem for linebackers at the next level, but defensive backs as well.

Boomer runs really well after the catch. He’s not afraid to lower his shoulder and run through guys, he has enough wiggle to make some defenders miss and he has a vicious stiff-arm, as you’ll see in the video below.

Boomer is rarely brought down on initial contact and he almost always falls forward. I’m really excited to see how Gleeson works to get the Oklahoma product out in space and let him operate.

If you’ve read about Boomer, you know that he was part of a run heavy offense at Collinsville. To put it in perspective, in the playoff game I watched against Guthrie, they ran 30 plays in the first half in which they passed five times for 8 total yards. In this game and many others, CHS was able to create big leads and then maintain those leads by finding consistent success on the ground.

This is a positive though for Boomer. He’s already coming into the college with plenty of reps as a run blocker, where he’s shown he uses his hands well, blocks through the end of the play and has the speed to get to the second level.

No matter how good of hands and how athletic he is, if he couldn’t block, he probably wouldn’t see the field at OSU. So I think this is a huge plus for a tight end coming out of high school.

Collinsville liked to use Boomer as the primary blocker through the hole at times, as you see in the clip below.

They loved to run a trap play where Boomer comes across the formation and blocks one way while the rest of the offensive line blocks down in the other direction. Boomer was a key component in the success of Collinsville’s running game and I was very impressed by his blocking skills.

Overall, I think Boomer is going to be a great fit in the Cowboy offense. He was primarily lined up in the H-back spot off the line of scrimmage or split out wide, and I think this will translate well to the way Gleeson likes to utilize his tight ends. Although, he will need to gain some additional experience as a hand in the ground, on the line of scrimmage tight end at the next level, but I think he already possesses the tools to excel in this role.

Boomer will still need to add a little size to his 6-5 frame, but it looks as though this won’t be a hard task, especially when you’ve got a guy like Rob Glass working with him. I’m really excited to see what Boomer can do and think he will make an immediate impact next season.