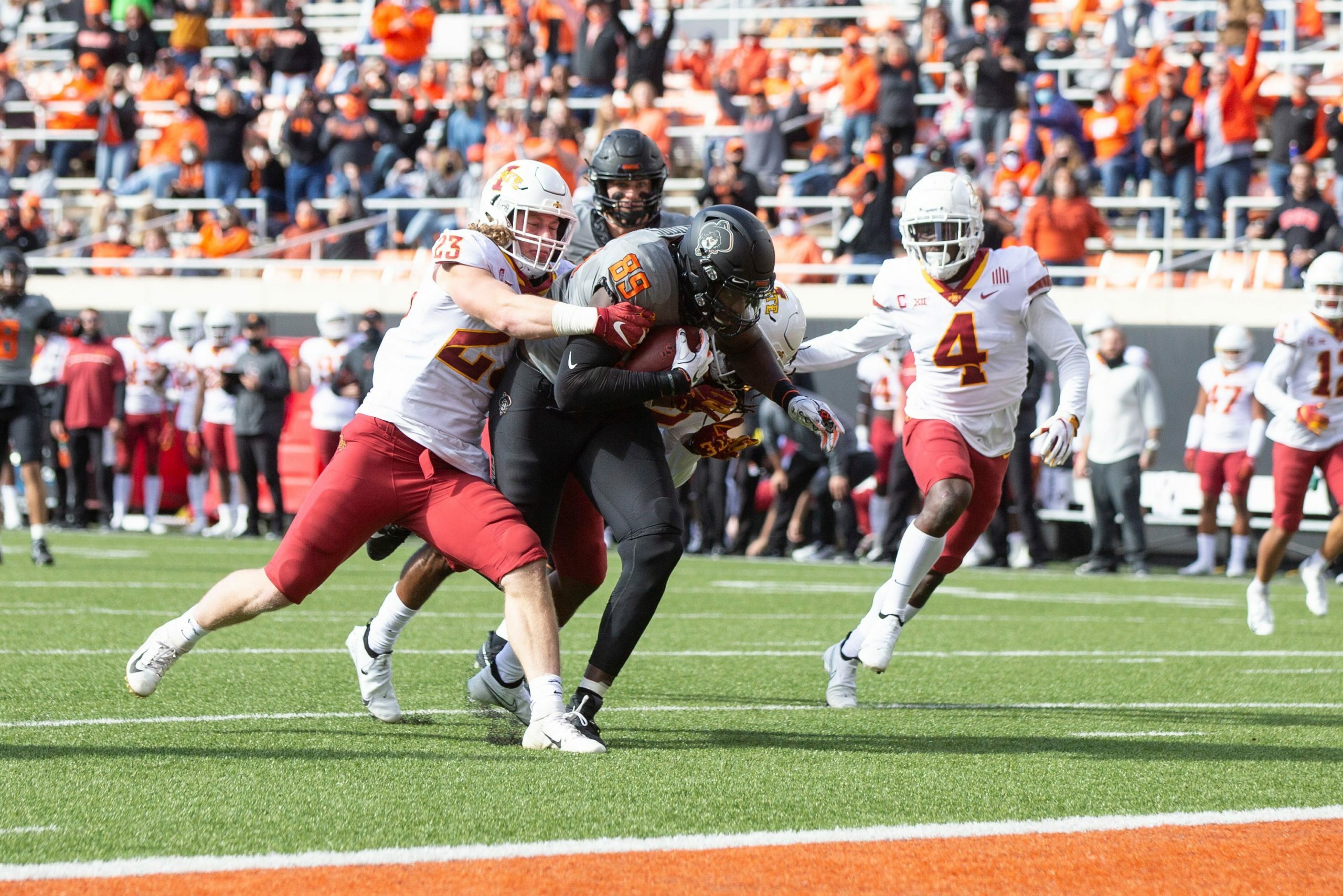 Oklahoma State secured its fourth win this season against Iowa State last Saturday, and the Cowboys remain undefeated on the year.

Cowboy running back Chuba Hubbard had a nice day on the ground, going for 139 yards on 25 carries (5.6 yards per carry) and one touchdown. Quarterback Spencer Sanders was 20-of-29 for 235 yards and a touchdown, but he also threw two interceptions. On the other side of the ball, aside from a couple of big runs by talented Cyclone running back Breece Hall, the Pokes had another solid performance and held ISU to 21 points.

For this post, I wanted to talk about how the Cowboys’ offense operated and what it did to score 24 points on Iowa State last weekend.

As we’ve seen from OSU offensive coordinator Kasey Dunn this season, there was a Cowboy back on the field for a majority of the snaps. Out of the Pokes 80 total plays, I only counted six where there wasn’t at least one of these fullback/tight end hybrids in the formation. Oklahoma state primarily based out of 11 personnel (one running back and one Cowboy back/tight end), with a good amount of 12 personnel (one running back and two Cowboy backs/tight ends) formations mixed in … including the Diamond formation, as we’ve seen a lot from the Dunn-led offense this year.

There were also a few offensive sets used in this game which we hadn’t seen much of this season and some I think we saw for the first time. For example, the Cowboys lined up in the 13 personnel (one running back and three Cowboy backs/tight ends), Diamond formation look shown below.

A lot had been made about the Cyclones’ three-tight end sets heading into this matchup, but OSU showed it have some of its own. This formation is nice for short-yardage situations, like the fourth-and-one play shown above, as it gives you extra blockers (Cowboy backs) in the running game.

In addition, we saw the Cowboys line up in Quads, or four receivers to one side of the formation, as you can see in the following image.

This formation can put stress on the defense in a number of different ways. It forces them to adjust and put more defenders on that side of the field than they normally would, which can allow the QB to more easily recognize coverage. In addition, as you can see at the bottom of the screen, this formation allows talented OSU wideout Tylan Wallace to have single coverage.

Lastly, one other interesting thing to note from the formation shown above is that one of the four players split to the four receiver side is a Cowboy back and one is also a running back. This allows the Pokes to go into this formation even while they are moving fast, by not having to substitute the running back and the Cowboy back for additional wide receivers.

Another set that stood out to me, that I don’t think we’ve seen a lot of this year, is “nub” tight end (or Cowboy back) formations. In the image below you’ll see the Cowboys with trips, or three receivers, to the top of the picture and a Cowboy back on the line of scrimmage to the bottom.

The “nub” side is the side of the field with a single tight end and no wide receivers. As Cody Alexander explains on MatchQuarters.com, this forces the defense to “acknowledge a true ‘run’ side, while also defending multiple receiver formations. Offenses that utilize TE sets can create leverage issues or force a secondary player to be left by his lonesome against a bigger player.”

The last formation I wanted to call out in this section is a 12-personnel look with a Cowboy back lined up as the inside receiver on each side of the formation.

We also saw Dunn utilize stacked wide receiver formations, and even though there wasn’t much 10 personnel utilized, there was a stretch in the second quarter where several plays in a row were run out of this personnel grouping.

From a play calling aspect, it was 64% rushing and 36% passing in terms of attempts. However, the total yardage split was much closer to 50/50, as OSU had 235 yards through the air and 226 yards on the ground.

Now, let’s get to more specifics in this gameplan.

Most gap scheme plays involve pulling linemen, and they were seen pretty frequently in the Sean Gleeson-led offense of a season ago. However, Dunn has been more zone-heavy in terms of the running game, but we saw the gap scheme on several occasions against ISU.

The primary gap scheme run we saw against the Cyclones was GT (Guard/Tackle) counter, which I discussed some last week as well. On GT counter, the backside guard and tackle both pull to lead block for the running back. The guard kicks out on the first defender he sees, and the tackle leads through the hole looking to block a defender at the second level.

However, Dunn added a little wrinkle into some of the GT counter runs by basing them out of the Diamond formation. See the Diagram below.

As you can see, this play adds an extra lead blocker for the running back. While the right tackle, guard and center block down (away from the play), the left tackle, guard and Cowboy back on the right side lead block from the running back. In addition, it creates misdirection for the defense as the left Cowboy back releases away from the play to block, and with Sanders at QB, there’s always an option for a QB keep following that Cowboy back.

Here’s the video this play.

Split zone is a variation of a zone blocking scheme where the extra blocker, the Cowboy back in OSU’s scheme, blocks across the formation, against the flow of the play. This play causes confusion for the defense, as the Cowboy back is blocking one way but the play is going another way, and it can also create a cut back lane for the ball carrier. Here’s a diagram of what this play normally looks like.

We’ve talked about this play in previous posts, as it’s been a staple of the Cowboy running game this season. Below you’ll see this play being run in the ISU game.

After running this play multiple times in the first half, the Cowboys came out in the second half and ran a “bluff” block from the Cowboy back instead of the typical Split Zone block. See the diagram below.

And, here’s the video clip from the game.

This specific play probably wasn’t a true “read” from Sanders, as you see the inside receiver, Dillon Stoner, block down on the read defender. This was probably a called keep, and it worked out well for the Cowboys.

Along with GT counter, split zone and zone bluff, the Cowboys also ran inside and outside zone, and I also saw them run power on one occasion.

Coming into Saturday’s game, the Cowboy backs had recorded three receptions for 23 yards. However, against the Cyclones Jelani Woods and Logan Carter tallied six receptions for 81 yards and one touchdown. It was a huge day for this position unit and something that we hadn’t seen included in the game plan this season.

Two of the three receptions for Woods resulted from the same passing concept. This concept is explained in the video below.

In the next clip of the same play, you see the corner at the top of the screen does bail, which would normally tell the QB to throw the out, however the safety on that side slides underneath… so the QB again throws to the Cowboy back.

On the touchdown to Woods’, it looked like a slot pption concept. See the diagram below.

As shown in the first two clips in this section, a lot of the Cowboy back receptions were in the flats, including two of Carter’s three catches. Hopefully, we continue to see these two utilized in the passing game moving forward.

We saw several passing concepts against ISU which I’ve written about previously from other games this season, such as shallow and Y-cross. However, there was one play I haven’t discussed recently, and that’s shakes.

Primarily designed as a cover 2 zone or 2 man beater, shakes features 3 vertical routes that are designed to place the safeties in a 3 on 2 isolation while putting a high/low stretch on both cornerbacks. The H or Y will run a middle search route.  If the middle of the field is open he will continue vertical and split the safeties.  If the middle of the field is closed he will make a square in cut at around 12 yards and settle up finding a throwing window between the linebackers or continue cutting across to create separation.  The outside receivers will also adjust their route according to the coverage.  Against free access (typically meaning the corner is at a depth of 7 yards or more) the receiver will execute a post corner route.  He will burst off the line and take 7 steps vertical, stick and then take 3 hard steps towards the post before breaking back to the corner and flattening off his angle.  He should catch the ball at around 18 yards… The key is that the receiver really sells the post route so that he can get the cornerback to flip his hips in the opposite direction before he makes his break.

The below image is what this concept normally looks like.

This was a really fun game to rewatch and breakdown. We saw some new things, some old things, and I think an overall solid game plan from Dunn. The offensive line played well, and there was good execution from the skill positions. The offense looks to be moving in the right direction, and I expect that to continue next week against Texas.