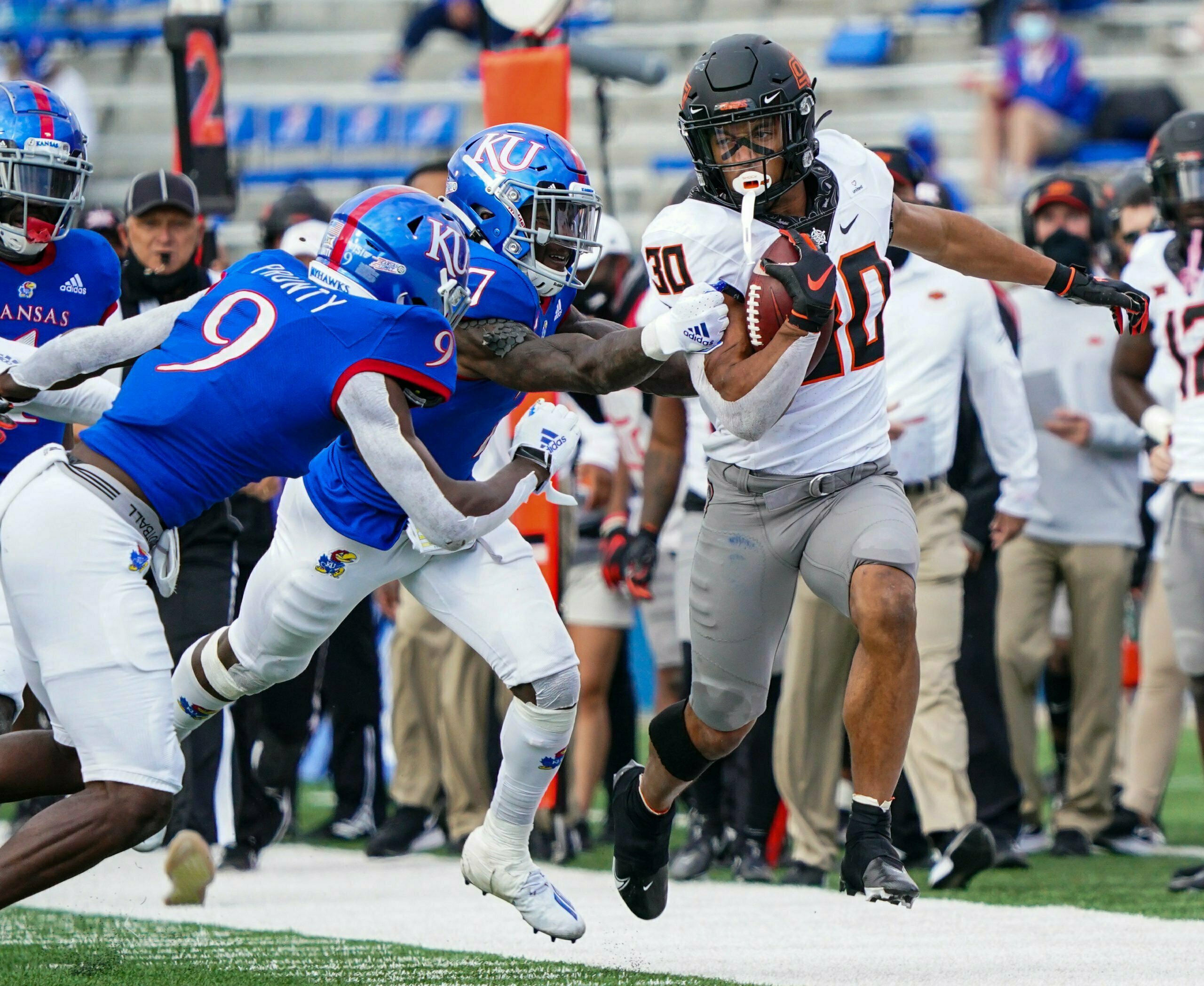 Oklahoma State recorded its highest scoring outing of the season this past Saturday in Lawrence with 47 points. The Cowboy defense continued its string of solid performances, holding the Jayhawks to only one score on the day. Although it was against a Kansas team that hasn’t looked very good this year, OSU had its best all around team performance of the season.

Below I wanted to dive into the Cowboy offense and how it was able to put up 40-plus points for the first time in 2020.

For this post, I wanted to specifically stick with breaking down the Shane Illingworth-led Cowboy offense. The final four drives had JUCO transfer Ethan Bullock leading the way, and although OSU was able to finish two of those with field goals, the majority of the notable takeaways come from the previous 10 drives.

We saw a good amount of the Diamond formation, and the formation shown in the image below with a Cowboy Back on each side of the line of scrimmage.

However, it wasn’t all of the same formations we’ve seen this year, as the Cowboys went with some 20 personnel (two running backs and no tight ends/Cowboy Backs) looks in this one. In the first image below you’ll see both running backs Chuba Hubbard and LD Brown in the backfield with Illingworth.

Then on the very next play we see OSU remain in a 20 personnel set, but this time Chuba Hubbard is split out wide in a Trips, or three receiver, formation with Cowboy wideouts Landon Wolf and Tylan Wallace.

Brown got his chance to be split out wide later in the game, although not in a 20 personnel formation, when we saw the Pokes line up in a five receiver set, something we haven’t seen a lot of this season.

From a play calling aspect, the Cowboys had a very similar run/pass ratio to their matchup with WVU. Against KU, OSU ran the ball about 67% of the time, which was really close the 65% against the Mountaineers. Although the total play count was much higher against Kansas (90 plays vs KU compared to 63 plays vs WVU).

In terms of individual play, Illingworth continues to show improvement game to game, and Hubbard and Wallace each had over 140 total yards and a pair of touchdowns. The offensive line is also making strides and I thought it played a pretty solid all around game.

Now, let’s get into some more specifics of Dunn’s game plan.

Both Baylor and Coastal Carolina were able to expose the Jayhawks defense by stretching them horizontally. Whether it was CCU running the option, or the Bears attacking the edge with gap blocking schemes or creating that horizontal stretch with Outside Zone, Kansas wasn’t able to consistently stop these types of running plays. Well, the Cowboys definitely noticed this on film and were able to do some damage with their Outside Zone running game early and often.

As a reminder, the terms Inside and Outside Zone refer to blocking schemes that have the offensive linemen blocking specific gaps instead of a certain defender. If an O-lineman has a defender lined up in front of him, he blocks him. If he doesn’t, then he steps toward the play side and either helps double-team a defender or moves to the second level.

The main difference between the two zone concepts is on Inside Zone, the running back is normally looking to run off the outside hip of the guard, as opposed to Outside Zone, where the offense is looking to stretch the defense to the sideline. See the diagram and video below for a an example of this play from last Saturday.

The Cowboys were able to find the endzone with Outside Zone as well, as you’ll see in the following clip.

As you’ll notice in both videos above, the Cowboy Back is lined up on the playside. Due to how KU was aligning their three defensive linemen, the play side tackle was able to block the defensive end to the playside, allowing the Cowboy Back to act as a lead blocker on the perimeter. This is shown in the image below.

We haven’t seen a lot of gap blocking concepts from the Pokes this season, as they’ve been more of a zone heavy team. However, against Kansas we saw Dunn’s offense utilize GT (or Guard/Tackle) Counter on several occasions.

On GT Counter, the backside guard and tackle both pull to lead block for the running back. The guard kicks out on the first defender he sees and the tackle leads through the hole looking to block a defender at the second level. See the diagram and video below for an example of this play from last weekend.

The cool thing about this play wasn’t just getting to see some gap scheme blocking, but how the Cowboys utilized all the options involved in this play in the same game.

What do I mean by this? Well, if you noticed above the inside receiver on the left side of the diagram is running a bubble screen route while the Cowboy Back and other receiver to that side block for him. You’ll see in the following clip that OSU runs a very similar play, but this time instead of handing the ball off, Illingworth throws the bubble screen out to Stoner. The pass is dropped, but Stoner had some green grass in front of him if he’s able to haul it in.

So, what caused Illingworth to hand it off in the first clip but decide to throw the screen in the second? It has to do with how many defenders are in the box, or close to the line of scrimmage, compared to how many blockers the Cowboys have. To explain this further let’s look at a pre-snap image from the first video.

As you can see, it’s five on five, which is a favorable matchup for the run as every defender is accounted for. Now, in the second clip, you’ll see below there are six defenders close to the line of scrimmage and only five blockers… this tells Illingworth it might be a good idea to throw the football.

Lastly, you see the Cowboys in a slightly different formation, but here is GT Counter again. This time OSU has a favorable look to run, with only five defenders close to the line of scrimmage.

Aside from GT Counter and Outside zone, we saw the Cowboys utilize the Cowboy Backs as extra blockers out of the Diamond formation and Split Zone running plays similar to what I wrote about last week, as well some Draw plays and even a Jet Sweep to Wallace.

In the passing game we again saw some concepts which the 2017 offense utilized heavily. This was something many people talked about in the offseason, including high school coach Wesley Ross in an article he wrote earlier this year. Specifically in this one it was the Shallow concept.

The basic premise behind the shallow concept is to place the hole player aligned over the dig runner in a vertical stretch.  The outside receivers will run either a go (versus press) or 6 step speed cut out route that ends up at a depth of 12 yards.  It looks like the QB eyes pre-snap leverage to decide whether to throw the out.  If the out isn’t there he will progress to the dig/shallow concept.  The shallow will usually come from the boundary.  The back will run a swing to the side the shallow came from.

See the diagram below for further explanation (this shows the speed cut out route by the Z receiver as opposed to the go route as the cornerback isn’t in press coverage here).

Now, let’s take a look at this play from the KU game.

The Pokes ran this concept several times last Saturday and I feel like we will see Wallace make a few more nice grabs on this play throughout the rest of the year.

The screen game involving both running backs and receivers was a big part of the game plan against the Jayhawks. LD Brown continued to show off his improvement as a runner with the screen shown in the clip below.

Oklahoma State also brought back “Orbit” motion, which we saw a good amount of last season, specifically against TCU, to get Wallace involved in the screen game. Orbit motion is when a wide receiver motions across the formation behind the deepest player in the backfield.

Along with Shallow and screen passes, we saw Illingworth connect on a deep ball to Braydon Johnson, hit Wallace in busted coverage and connect on several hitch and out routes.

This was by far the most fun game to watch this season in terms of offensive rhythm and building plays off of each other. The KU defense is not great, but to show you can execute the game plan like that is impressive no matter who it’s against. I’m excited to see how this offense continues to improve as we move through the season.