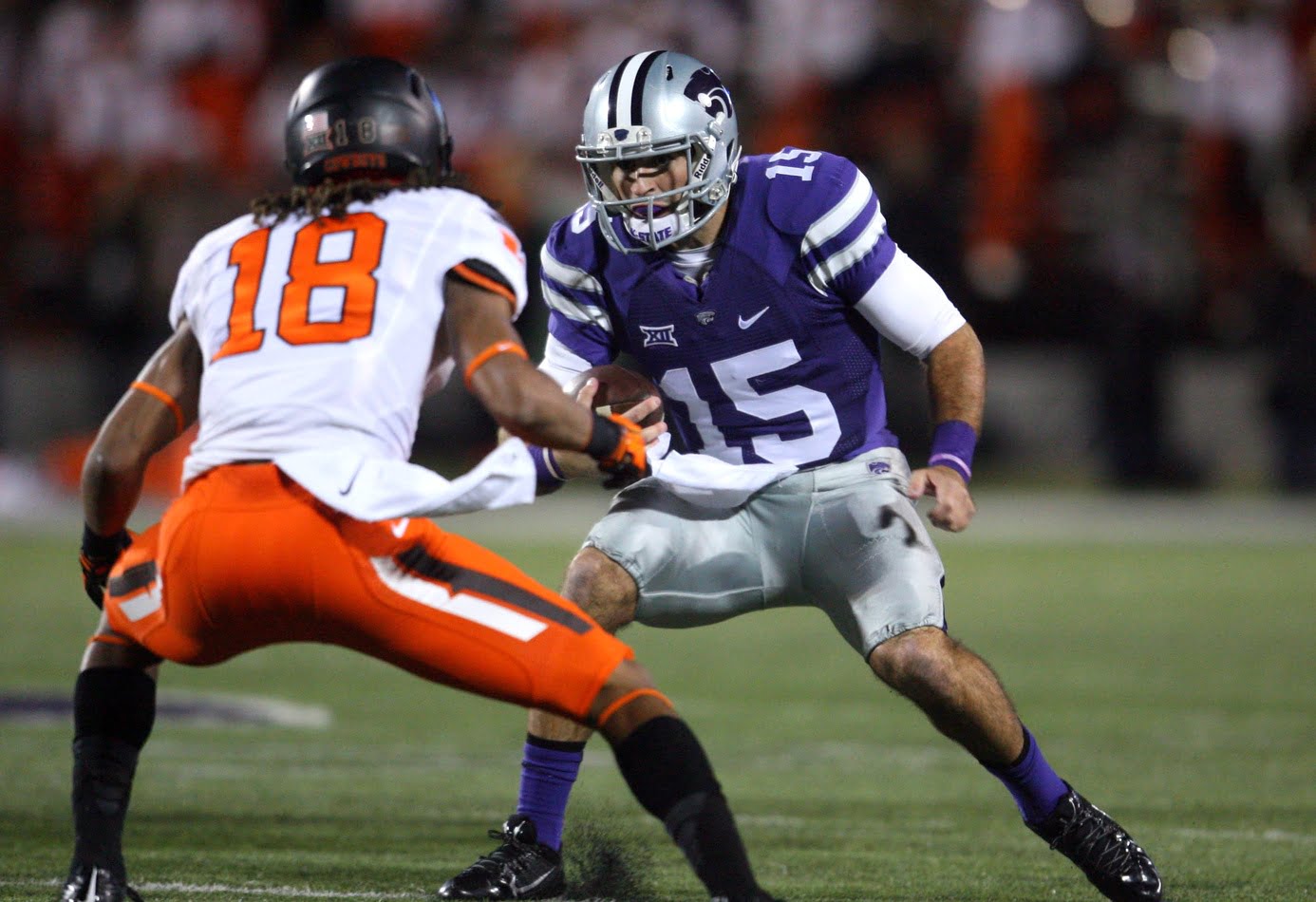 Ramon Richards has had a tough go of things this year. (USATSI)

It came late in a 48-14 blowout loss to Kansas State, but Ramon Richards picked off a pass from backup KSU quarterback Joe Hubener and took it 40 yards for the touchdown.

And if you ignore the fact that it was 45-7 at this point and KSU was playing its second string compromised of former community college all-Americans, it was a good play.

What the offense was doing

Kansas State is attempting to run a swing pass to the inside receiver.

KSU is lined up in an offset pistol formation with a halfback to the left of Hubener and a HB directly behind that HB. 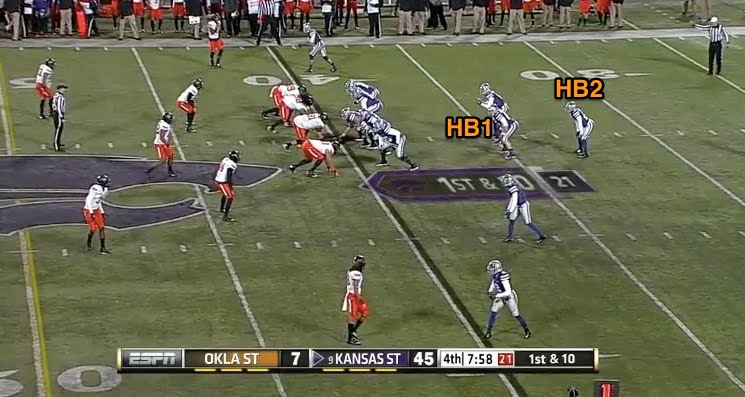 The ball is snapped and the HB to the left of Hubener takes off across the backfield to go block a linebacker. The HB behind Hubener runs up and Hubener fakes the handoff to him. 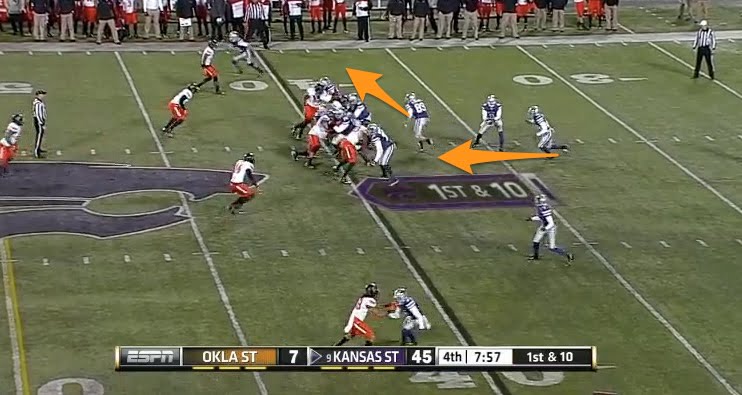 Immediately after he fakes the handoff, Hubener looks up to find the inside receiver, who is now running a swing route. 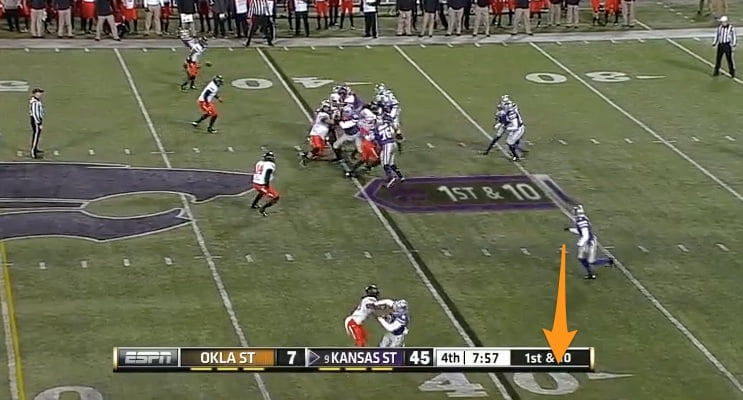 Hubener throws the ball to the receiver but before it reaches his hands, Richards has already stepped in and intercepted the pass. 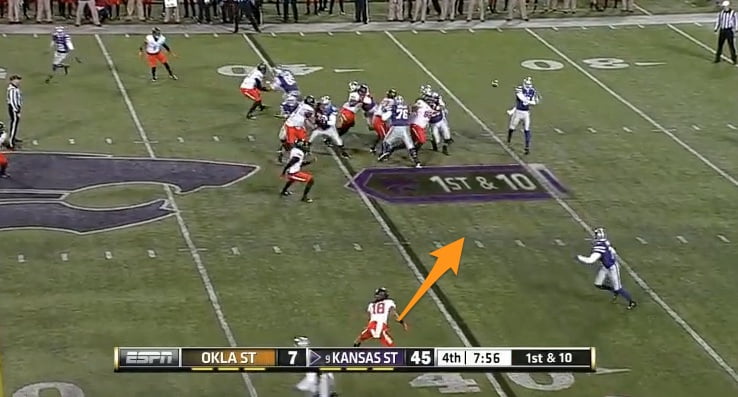 Why this play worked

OSU is lined up in its base 4-3 defense, running the familiar Cover 2 zone.

We know it’s a Cover 2 zone because the safeties are dropped back covering the deep halves of the field while the corners are sitting in a zone that is within 5 yards of the line of scrimmage.

The two outside linebackers play up close to the line of scrimmage, keeping an eye out for the run. MLB Ryan Simmons immediately drops back about 5 yards into zone coverage. 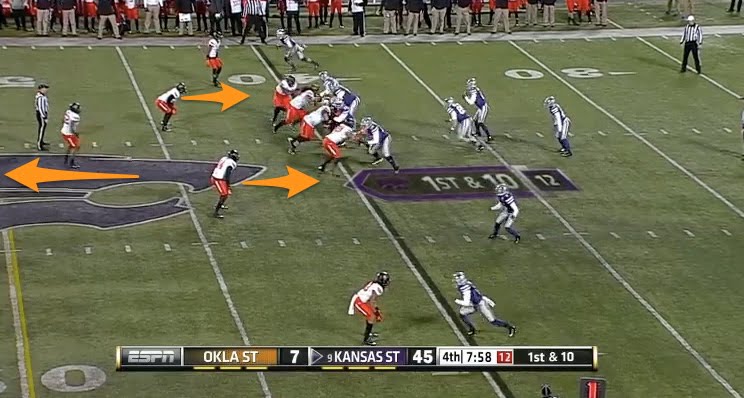 When the ball is snapped, the outside receiver comes off the line of scrimmage and just runs a go route.

Richards collisions the outside WR to knock him off his route momentarily and then sits in his zone, waiting for a play that may come his way.

Sometimes, a CB might go with the outside WR for too long and put himself in a bad position to make a play at or near the line of scrimmage if its run that way. 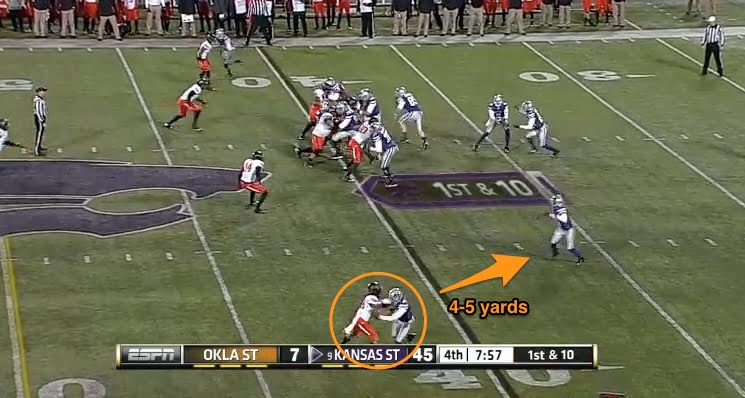 However, Richards gives the necessary quick collision to the outside WR, and then releases him so that the WR is now the safety’s concern.

Because of his attentiveness from the time the ball is snapped, Richards is able run up when the ball is thrown, cut off the route, and intercept the pass for the easy score.

Much like a screen pass, an offense will run a swing pass to expose a defense’s vulnerabilities and get its playmakers out in space.

The majority of the time, a swing pass is run to the side with the multiple receivers, as is the case here.

The main reason for this is it somewhat keeps the defense guessing – though it’s fairly easy to identify once the ball is snapped – but also it allows for a WR to block either the CB or safety while the WR who catches the pass only has one defender to worry about instead of two.

It is important for a defense to have sure tacklers in the secondary to prevent a play like a swing pass from going from a 2-3 yard gain to an 8, 9, or 10 (or more) yard gain.

Richards has had a lot of criticism thrown his way this year, and whether you think that criticism is justifiable or not, it’s good to see a true freshman have moments like this after being prematurely thrown into the starting lineup.