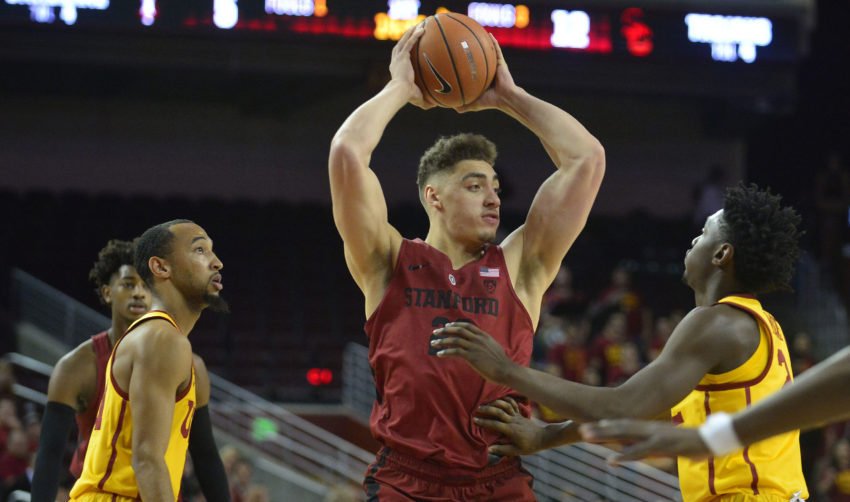 When Oklahoma State faces third-seeded Stanford in Gallagher-Iba Arena on Monday night, they will be tasked with slowing down an all-conference performer and arguably the best post scorer they’ve seen all season. Stanford’s Reid Travis, the Cardinal’s star 6-8 senior forward, has been lighting it up for Stanford this year. The two-time All-Pac 12 player is an excellent rebounder and thrives around the rim in putback and post-up situations. Here’s a brief look at the former McDonald’s All-American who has been carrying the Cardinal this season.

Travis is one of only two players in the Pac-12 to be top-four in the conference in both scoring (19.6 PPG) and rebounding (8.7 RPG). Additionally, he’s recorded a double-double in his past six games and scored at least 20 in five of his last seven. Travis shows a rare balance between agility and strength that few college big men possess. He’s able to back down defenders on the low block when he has a strength advantage and knows how to use his elbows and shoulders to gain an angle on defenders in the post:

Yet he also features excellent footwork and can attack from the face up position. Take his spin and finish with the right hand, for example (a move he uses quite a bit):

In addition to leading the team in scoring, Travis is also the Cardinal’s best rebounder. He gets a good chunk of his production on put-backs and almost always goes for a shot underneath after a rebound.

Travis also has a unique part of his game. His handles are exceptional for a forward and he will often take on his defender off the dribble, sometimes from the free throw line:

Or even the 3-point line extended:

He can even be the occasional threat from beyond the arc, as he’s shooting over 30 percent from 3-point range for the first time in his career:

The battle between Travis and the Cowboys’ strong frontcourt, like senior Mitchell Solomon and sophomore Cameron McGriff, will be one of the biggest storylines of Monday’s game. Travis is coming off a 25-point performance in the Cardinal’s double overtime win over BYU, but if the Cowboys can match his strength and physicality and limit his offensive production, they give themselves an excellent shot to move on further into the NIT.