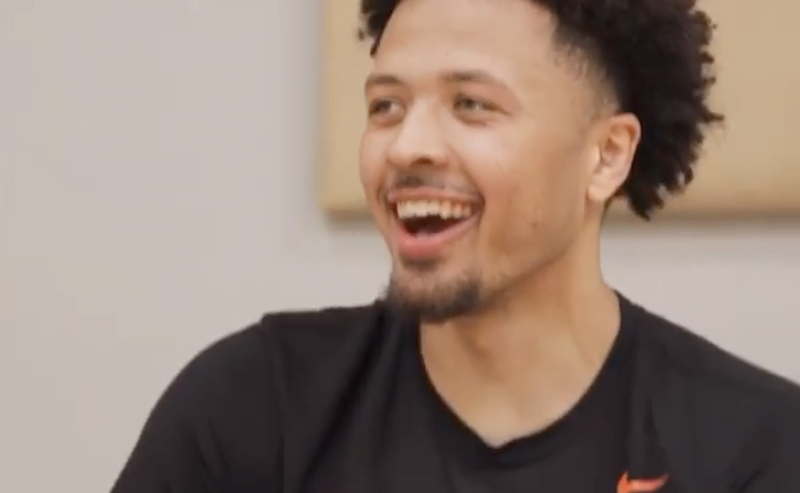 Cade Cunningham met with the media Wednesday afternoon for the first time since his arrival at Oklahoma State. In a nearly 40-minute discussion with local and national media, he spoke eloquently of his decision-making process that led him to OSU, his relationship with Mike Boynton, the NCAA sanctions looming over the program and his kinship with the current roster.

In his appearance he was thoughtful, honest and insightful, giving us a real glimpse into the inner-workings of how he came to the decisions he did — and how he landed at Oklahoma State.

Below are five of the best quotes from the discussion, which were tough to narrow down. If you want to watch the full interview, you can do so here.

1. Why he chose Mike Boynton and OSU (pre-and-post-sanctions)

“After kind of settling down and really looking into everything, at the end of the day, Coach Boynton is who I wanted to play for. It would have been tough for me to go overseas and go play for a foreign coach, or even the G-League. I hadn’t built a connection with anyone like that, so Coach Boynton, I already had a great relationship with, and that’s who I wanted to play for.”

2. The backstory with Boynton

“My recruitment was such a weird one. Lot of highs and lot of lows. Our relationship started my freshman year, I hadn’t played any high school games. We were in our preseason workouts. I had a teammate, Kyler Edwards, who was getting recruited. I didn’t come in thinking I would be recruited. Boynton came in, watched me a couple times, he walked up to me and just offered me a scholarship. I was like, ‘What?’ He told me later on that Brad Underwood didn’t even know that he was offering me. Now, looking back, when I talked to Coach Underwood afterwards, he was like, ‘Well I guess Coach Boynton really likes you.’ Coach Boynton believed in me early on and I’m super thankful.”

I’m already a Cade fan, but him agreeing with my LeBron > MJ take has taken my fandom to new heights. We must stan.

Cade Cunningham met with the media for the first time today since arriving at Oklahoma State. Most important takeaway: He's team LeBron > MJ

"I'm growing up in the LeBron era, so I gotta say LeBron out of respect. But I'm not going to argue with anyone who says Michael Jordan."

4. Being the guinea pig

“I want to be the guinea pig for it [being a one-and-done at OSU], and I don’t think guinea pig is the right word because I don’t feel like I’m testing anything out. I really feel confident in the fact that Coach Boynton can get me where I want to be and the rest of our staff can do that. It’s really just for me to show everybody else that’s coming up that it’s possible wherever you want to go. If you’re good enough to be that pick that you want to be, you can do that. NBA scouts, they’re going to find you if you’re that good. I feel like Coach Boynton is who I wanted to play for. That’s who I feel like can get me to that platform and to that level. After that, I think a lot more people will want to follow behind and use that same route.”

5. Cade’s desire to get OSU back on track

“I really like [Oklahoma State University], I love it. I feel like this is the opportunity to get that history rolling and start a new trend of, you can be a top guy and go to Oklahoma State and succeed. I feel like Oklahoma State was the perfect fit for me because of the Big 12, the coaching staff, the location. … I don’t really feel any pressure of playing basketball because that’s a game that I’ve done since I was a little kid. There’s no pressure in playing basketball. It’s a game at the end of the day, and I feel like I’m pretty good at it.”