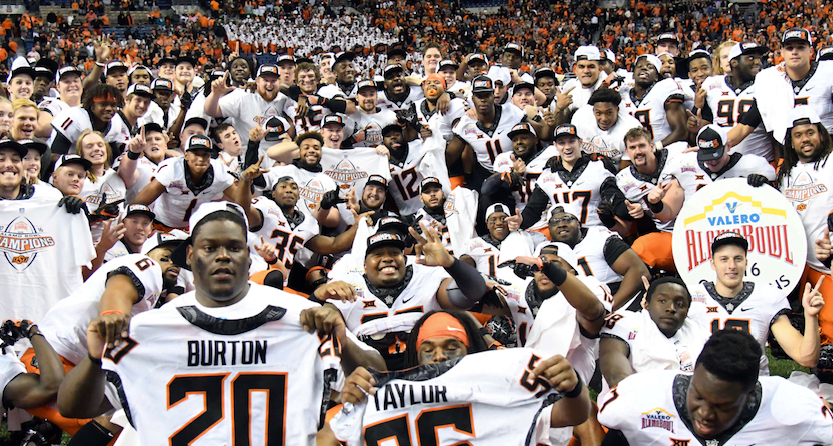 Oklahoma State put a bow on a solid 2016 campaign with a 38-8 victory over the Pac-12 runner-up, Colorado Buffaloes. Mason Rudolph dropped a cool 22-32 for 314 yards and 3 touchdowns. James Washington, despite suffering a finger injury, caught 9 balls for 171 yards and a score, and the defense bullied the Buffs all night long. Let’s take a look at the 5 best stats.

1,380. That’s how many receiving yards James Washington finished with for 2016, good for 6th all time for a single season at Oklahoma State.

Most receiving yards in a season for #okstate:

Washington manhandled Chidobe Awuzie all night long, who many considered to be a 1st round draft pick. QB1 should have perhaps the deepest and most talented group of receivers in college football in 2017, and it all starts with no. 28.

4,091. That’s how many yards Mason Rudolph threw for in 2016. To give you a perspective all time, here is the comprehensive list of Oklahoma State quarterbacks to top 4,000 yards in a season.

Mason was the only QB in college football to top 4,000 yards and throw under 5 interceptions this year (4), with 28 touchdowns to boot. He was consistently one of the best quarterbacks in the country all year long, and he’s coming back for one more ride in 2017. Is it September yet?

6. That’s how many games true freshman Justice Hill hit triple digits in rushing yards this season (and had 99 rushing yards against OU). Justice Hill was easily the biggest surprise of the offense, the catalyst that made them go, and established himself as an elite rusher in the Big 12. Once again on Thursday, Justice carved up the Buffalo defense, running it 19 times for 100 yards and put a punctation mark on the dominant victory.

62. That’s how many rushing yards the Cowboy defense allowed to Phillip Lindsay and the potent Colorado rushing attack. Lindsay, who ran for 1,189 yards and 16 touchdowns this year, had to fight tooth and nail for every inch against Glenn Spencer’s group, who played their fastest, meanest game of the season. The Buffs averaged just 2.1 yards per carry, and never got it going against the Cowboys front seven, who pushed them around time and time again.

5. That’s how many ten-win seasons Mike Gundy and the Oklahoma State Cowboys have piled up since 2010. It’s easy to criticize The Mullet for his conservative play-calling in Bedlam, but there has never been a head coach in Stillwater win as consistently as Gundy has. He’ll finish in the Top 10 again in this season’s final rankings, and there’s no reason to believe this team shouldn’t be in double digit wins next December, playing the Oklahoma Sooners for the Big 12 title in Arlington. The Mullet abides.