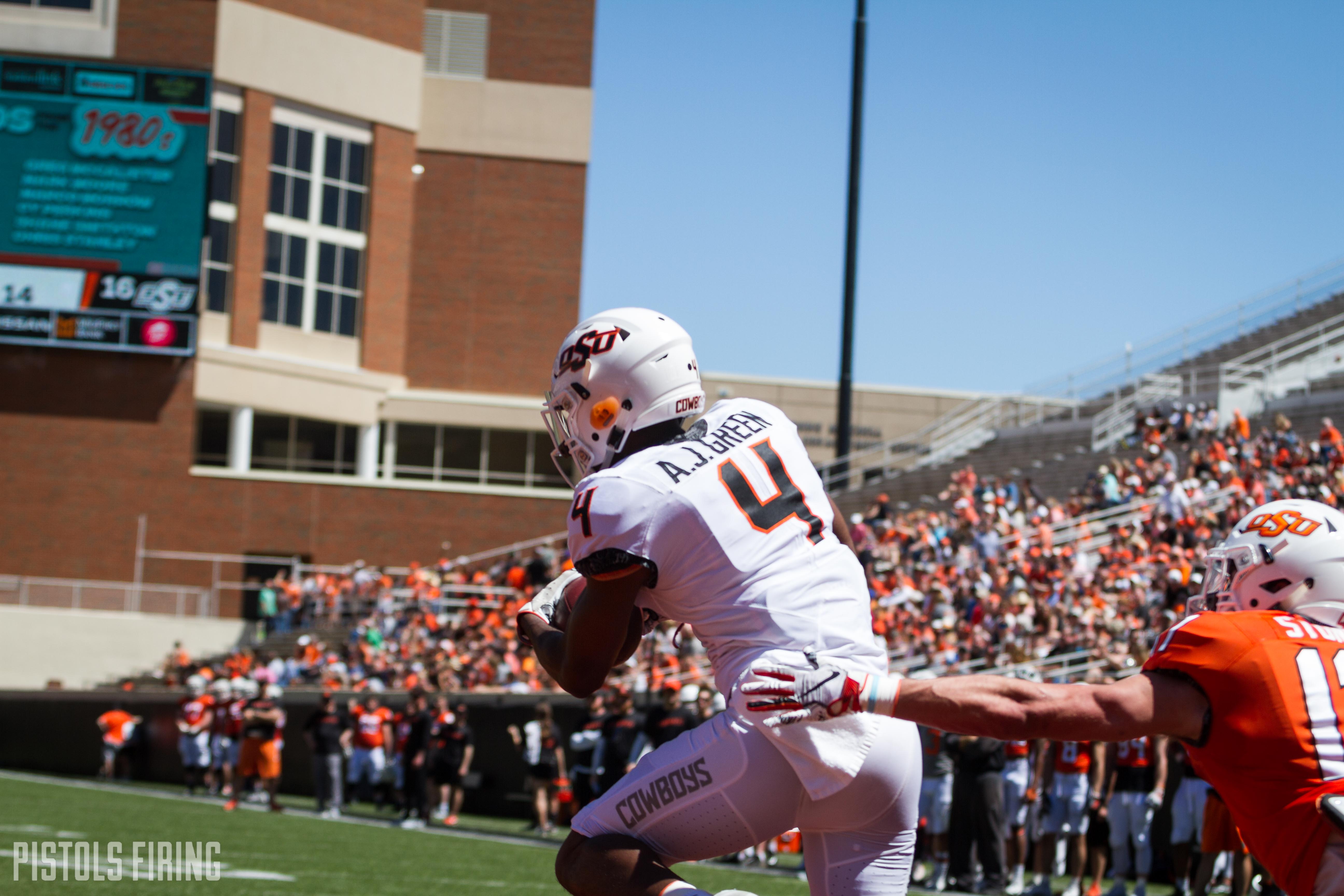 STILLWATER — After rolling through my first five thoughts on Oklahoma State’s spring game practice, in just over 1,000 words, I figured I should break up my last five into their own post. Here are five more takes on an interesting day in Stillwater.

A.J. Green in particular was outstanding Saturday. He had picks against Dru Brown and Spencer Sanders, and I don’t remember once seeing someone get Mossed to find out it was him.

I noticed Rodarious Williams a bit less, but again, I don’t remember seeing some receiver dominate him. So, the two starters look good, and it’s now about building depth. Kemah Siverand, Bryce Balous and Thomas Harper all faced C.J. Moore’s wrath Saturday, but if those three guys can all develop into solid contributors, it’s going to be a stingy group of corners to go against.

About 30 minutes before the rest of the team came out, Tom Hutton, and the other kickers/punters, came out to warm up, and Hutton was smoking footballs to the heavens.

His punts had a lot of hang time, went a long way and had backspin on them. So when they landed instead of bouncing into the end zone, they came back toward him. I cannot recall a time I have ever been so excited to watch a punter as I am for this fall.

There’s usually at least one surprise when a new roster gets released. Saturday it was LC Greenwood, the linebacker.

Greenwood came to OSU as a four-star wide receiver, but he also played on the Lakeview Centennial defense. He played in three games in 2018, but didn’t record any stats, and it was his idea to make the switch.

“He came in and wanted to make the move,” Gundy said. “He felt like that maybe he had hit a dead end at the wide out spot, so he wanted to make a move to that. He played both ways in high school.”

Listed at 6-foot-3, 212 pounds, Greenwood probably still needs to add some weight, but he isn’t far off. Calvin Bundage, for example, is 6-2, 215. I didn’t watch Greenwood too much Saturday because my eyes for the most part were burning holes into Dru Brown and Spencer Sanders. Afterward, Gundy said it’s too soon to tell how good he can be there. For now, he is still number 81, but he said he isn’t sure if that’s going to stick.

“Just being here for a long time, I feel I have gotten bigger and stronger,” Greenwood said. “I like to hit now. … I feel I can help the defense.

“The first week … it was tough, I’m not going to lie. Getting to learn this stuff, watching extra film, I’m getting it more and more each day.”

At first, I didn’t think I was going to be a fan of a spring practice in place of a spring game, but it wasn’t terrible.

There was a lot going on at a time, which is good and bad. It’s good because it doesn’t ever feel like it’s dragging on, but it’s bad because I, like most I’m sure, only watched what the quarterbacks were doing and probably missed stuff elsewhere.

As for future end-of-spring shindigs, Gundy said this probably won’t become the norm.

Gundy said with returning linemen next season, they’ll likely do a game again in 2020.

“Wideouts, we can tell them what to do,” Gundy said. “DBs and stuff, play man, you got that guy. It’s not that easy, but for the most part. Up front, guys moving around, twists, stunts, protections, different blocking schemes, pulls, it’s not quite as easy. I would like to think at this time next year, we’ll be able to have a game.”

5. Onward to the Long Summer

It was nice to see the unknowns that we’ve all been waiting to see.

There is in fact legitimacy to this quarterback battle. C.J. Moore is an animal, and Tom Hutton can rip footballs to the moon. Now, after that small appetizer comes months of waiting.

A lot can happen in summer workouts. It’s a different sport, but if you recall, Kentrevious Jones lost about 50 pounds last year. We saw the outline of what this team will look like in 2019, but now we’ll wait for Aug. 30 to see everything in complete focus.