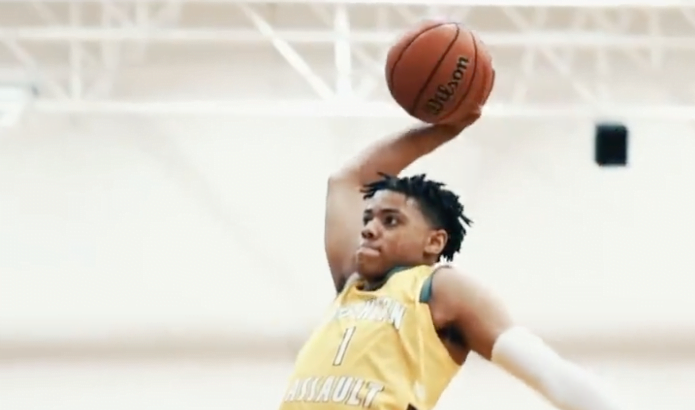 Five-star talent Keyonte George, the No. 6 (!) overall player in the 2022 class according to the 247Sports Composite, announced a top five on Thursday that included four Big 12 schools and Kentucky.

OSU was among that Big 12 quartet along with Texas, Baylor and Kansas.

George is a 6-foot-4, 185-pound shooting guard from Lewisville, Texas. It’s unclear when the Pokes offered or when they really made a push, as his social media is relatively quiet on the recruiting front. But it’s rather significant to be included in a final list of schools for a player of his ilk. He’s a potential one-and-done type talent.

Adding to that mystery, there is no clear favorite right now and turning pro — not going to college — is the only crystal ball pick for him at 247Sports. The G League Ignite has emerged as a potential landing spot for blue-chip recruits like him after Jalen Green and Jonathan Kuminga spent last year there while skipping college and earning hundreds of thousands of dollars.

Given all that, I think it’s generally good news OSU is in the mix but I wouldn’t be too entirely hopeful about the Cowboys’ chances here with the competition and the pro route looming. Yet clearly Mike Boynton has captured his attention, with an obviously appealing pitch to a player with NBA aspirations. And it doesn’t appear as if George is just shrugging off Boynton or what OSU brings to the table.

“Mike Boynton really just tells me that I could be a lot like Cade Cunningham for them,” he told 247Sports’ Eric Bossi recently. “I could come in and have a good season and prepare myself for the next level and that’s the goal. One of my best friends Avery Anderson goes there and we talk about college a lot, Coach Boynton just tells us that we could feed off of each other.”