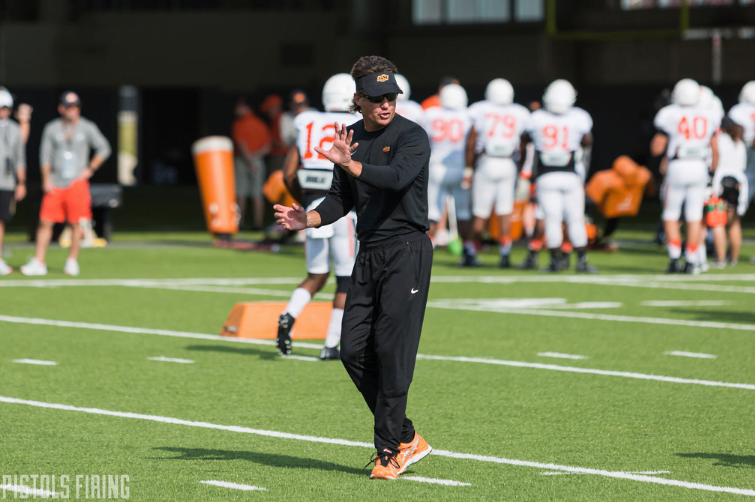 Oklahoma State signed the majority of its 2018 recruiting class in December, but on Wednesday the staff put a cherry on the top by adding defensive linemen Amadou Fofana and Samuela Tuihalamaka to set the class in stone.

Overall, I feel the class turned out really well. The staff addressed major areas of need, replenished talent at some spots that needed an injection of talent, and did so relatively drama-free with no last-minute signing day surprises.

Because of some late-cycle stunners that have hurt OSU down the stretch in recent years — Nick Starkel, Ronald Jones and Dan Moore, to name a few — no news on Wednesday is good news.

So with that in mind, I wanted to pen my thoughts on sweeping takeaways on the class as a whole. No more rambling, let’s hop to it.

To me, there were three positions that absolutely needed addressed: QB, offensive line, and safety, and the staff delivered big in all three areas.

• QB Spencer Sanders: A superstar high school talent, Sanders, a four-star recruit, won’t arrive on OSU’s campus until this summer. But he’s still the guy I’d pick to win the starting job when the Cowboys take the field next fall.

• Offensive line: Bryce Bray, Tyrese Williams, Hunter Anthony, Hunter Woodard and Jacob Farrell — “war pigs” as they call themselves — is a mean incoming offensive line unit. Josh Henson has some full-grown men ready to contribute. To me, this is the best overall OL unit OSU has ever brought in.

• The late addition of former Arkansas pledge Sean Michael Flanagan put the safety bunch over the top. The third-highest ranked prospect in the 2018 class for OSU, Flanagan headlines a group of productive, heralded high school players who can ball. Keep an eye on Kanion Williams and in-state star Jason Taylor among those who will be potential All-League guys down the road. Shreveport’s Jarrick Bernard is an intriguing developmental player, too.

2. You’ve got your starting QB … right away

Maybe the recent addition of Hawaii QB transfer Dru Brown has you thinking OSU might be considering rolling the dice with a more experienced QB in 2018, but to me, the Cali native is no more than an insurance policy for the real QB1 in 2018: Spencer Sanders.

Sanders is more mobile than Brown, which will help given OSU’s turnover along the offensive line, and his arm strength is far superior. So long as Sanders can grasp even the basic concepts of Mikey Y’s offense, I think he gets the nod from day one. And the more time that passes, the more sure of it I’m becoming. He’s just too talented to sit on the sidelines.

I’ve been harping on this for a year or so that, in order to have a legit defense, you’ve got to have a Ryan Simmons-like talent running the show on defense in the middle of the unit. And with all due respect to Chad Whitener, that position has been mostly average over the last two seasons.

Recruiting misses played a factor in that, and ultimately, it might be a big reason why Glenn Spencer lost his job. 2018’s class is a perfect example of that.

Middle linebacker Blake Barron, an undersized high school backer, is expected to play weak side for OSU and almost certainly will redshirt. And high school safety Kolby Peel, a nimble athlete but doesn’t yet look the part of a linebacker, will eventually fill the role at star. Both likely won’t play until 2019 or beyond.

I’m intrigued by the talent, to be clear. But also curious why OSU didn’t prioritize the position more in the class.

4. This class is slightly above Gundy average

OSU’s class finished 33rd nationally and fifth in the Big 12, which is basically par for the course for Mike Gundy. But overall, this is one of the more heralded classes on a per-player basis.

Kyle Porter wrote a little about this earlier today but I think it’s absolutely worth reiterating, so I’ll share a clip from his carefully-constructed piece you should read.

Rankings are measured based on the aggregate score of a class, where OSU scored about how it always scores. However, on a per-player basis, the Cowboys have never been stronger. Of the 24 measured players on 247Sports, Oklahoma State’s average player ranking was 86.5.

This is the best it has been since 2010 when it was 86.3. For the sake of context: Examples of players measured at an 86.5 ranking in recent years include Jordan Sterns, Emmanuel Ogbah, Zac Veatch and Tracy Moore.

Is the class eye-popping with dudes from top to bottom? Not necessarily. But the top of the class — C.J. Moore, Spencer Sanders and Sean Michael Flanagan — is pretty impressive. And even more interesting, the lowest-rated player of the class, Gabe Lemons, wouldn’t have even ranked in the bottom five last year. Solid from top to bottom.

5. Late-cycle scramble appears to have worked

When OSU lost the commitment of in-state DT Israel Antwine a day before the December signing period, it sent the OSU coaching staff into full-on scramble mode. Without Antwine, OSU had no incoming nose tackles and nothing promising on the horizon.

It’s yet to be determined if both players, which were very lightly recruited, can contribute early at Oklahoma State. Fofana’s experience suggests he might. But as we sit on Feb. 9, all credit to the staff for filling the scholarships it needed in such a short time frame. Let’s hope the late adds pay off.