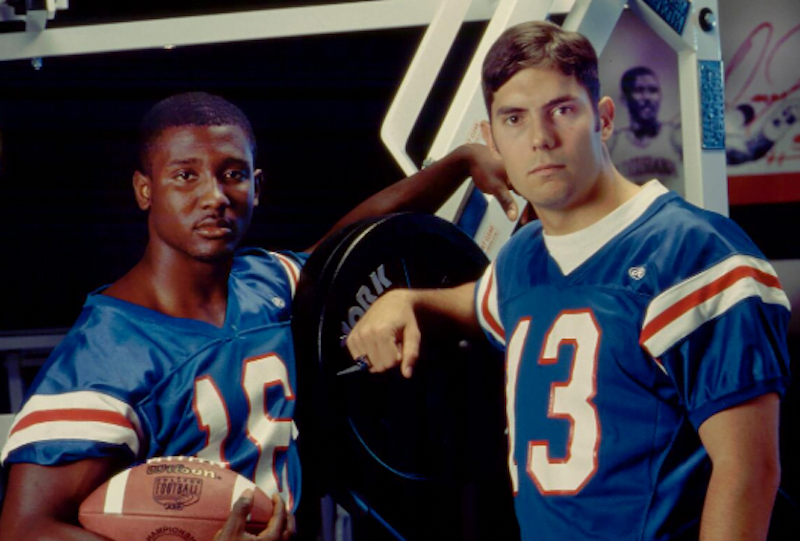 The first thing I thought of when I found out that Oklahoma State had hired Tim Rattay to be its new QBs coach was Troy Edwards. Rattay was Edwards’ QB in the late 90s when Edwards put up 1,996 receiving yards in the 1998 season (including 21 for 405 on Nebraska to open the season) and won the Biletnikoff. He went on to be the No. 13 pick in the 1999 NFL Draft.

Rattay also got drafted in the following year’s draft. Round No. 7, pick No. 212 by the 49ers. His NFL career was lengthy but not illustrious. He started 18 games across eight years and went 5-13 as a starter. After finishing up the 2007 season with the Arizona Cardinals and a two-year run in the UFL (2009-10), Rattay turned to coaching.

First with the Las Vegas Locomotives, his former UFL team, then for five years with Louisiana Tech (his college team) and most recently as the QB coach with the Washington Redskins. His career — like most players-turned-coaches — is a bit of a maze, and I’m intrigued to hear how Gundy eventually landed him in Stillwater.

Here are five things I discovered when researching Tim Rattay, his playing career, his coaching career and what to expect in Stillwater.

1. Rattay Had an Unheralded Early Career: He didn’t get a starting spot in high school ball until his senior year, but then he went on to finish 10th in the 1999 Heisman race. In a lot of ways, Rattay has seemingly always overachieved, which seems like a perfect fit for — like it or not! — Gundy’s Cowboy culture.

“I never thought I’d play in the NFL,” Rattay said back in 2007. “It’s fun for me, and every year I can play, it’s just extra. I’ve played longer than I ever thought I would.”

2. Can He Recruit? I found this thread on Reddit intriguing. Here’s a snippet.

So Tim is a Tech legend. He is in our hall of fame. Everyone in Ruston and our alumni love him! He’s a great QB recruiter. We got some guys who had P5 offers when he was here.

So is this true? Is he a great QB recruiter? If I’m reading his bio correctly, Rattay was seemingly responsible for the 2016-2019 QB classes in Ruston as he was named QB coach at the end of 2015. Here’s what he did in each of those years.

It’s not as gaudy as I would have liked, even for Louisiana Tech. Most of these guys were ranked outside the top 1,000 nationally, and only one of them held even one offer from a Power 5 school (I should note that J’Mar Smith — a 3-star player who had an offer from Mississippi State also signed while Rattay was there, but it was when he was a WR coach rather than a QB coach).

3. Can He Develop? This is the more exciting part to me. Rattay coached Jeff Driskel, Ryan Higgins and Smith (mentioned above) during his time at Louisiana Tech. Here are their numbers.

Driskel and Higgins had spectacular senior years, combining for 68 TDs and 18 INTs. Smith struggled a bit early on, but was also a dual-threat guy like Spencer Sanders. In watching some of his stuff, he actually reminds me a little of Sanders. I wonder how much that was considered in the hire. Regardless, Rattay had some home runs in Ruston.

Rattay doesn’t dive real deep when asked about his QB philosophy in this video from last season. He says he’s sort of blended his dad’s stuff (his dad coached him in HS), with what he learned in college from Gary Crowton with everything he’s gleaned in the NFL from he good QB people he’s been around. I kind of wanted more than that.

It’s also not the most dynamic interview ever. Not that you have to be Scott Van Pelt to coach QBs, but he doesn’t exactly engender inspiration when he talks. Of course Mike Yurcich didn’t either, and he turned into a great recruiter and coordinator. So what do I know.

In 2000, the Patriots took somebody named Tom ahead of Tim in the sixth round. Remember, Rattay went in the seventh. The two teams met later that year in the Hall of Fame Game. Here’s Bill Belichick recently on Tom and Tim.

“That was an interesting game because we started out a little bit on the Tim Rattay trail and [former Patriots quarterbacks coach] Dick Rehbein went down there and worked him out at Louisiana Tech, or wherever he was from,” Belichick said.

“They ran a big spread-offense and he had a lot of big numbers and all of that and we kind of liked him and thought that might be a late-round pick. Then we got on [Tom] Brady, so it was kind of Brady and Rattay in that seventh round. Then, as luck would have it, we took Brady and they took Rattay and then they were playing against each other, and so we kind of got a look at that, those two quarterbacks in the sixth round, or whatever Brady was, but the same thing. I guess we took the right one.”

I would say yes.