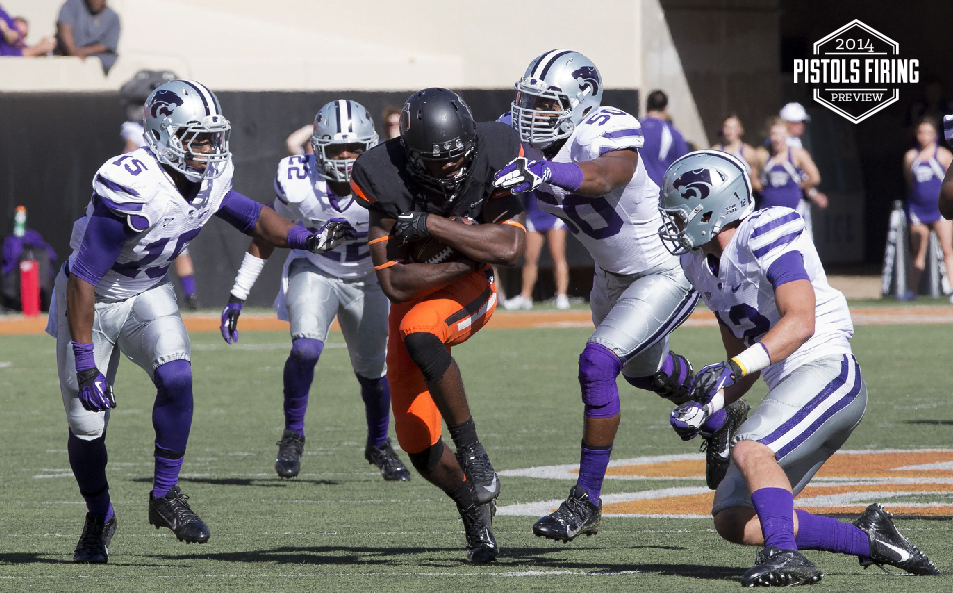 Preseason football camp is now over which means OSU players will be trading their shoulder pads for those of the yellow and lined variety, in the mornings anyway.

We never learn much from these things because Gundy has the gate to his little kingdom more heavily guarded than the president giving a speech at a NRA convention but that doesn’t mean that we learned nothing.

Here are five things I took away from the weeks preceding the start of the 2014-15 school year:

1. The question mark on offense might not be at QB: Offensive line is going to be…well, let’s just say OSU probably isn’t going to be in the top 20 in the country in sacks allowed like it has been in each of the last seven (!) years. It’s probably not a great thing when your new offensive line coach has this to say about the guy who’s supposed to be the point guard of his unit:

“He’s maturing. He was a little immature when I first got here, obviously due to his lack of experience. I think he has come light-years from spring to now.”

Daniel Koenig is a boss — and he continues the streak of a Koenig being on the offensive line since World War I — but he’s also the only one there with more than eight starts in his career. And only he and Chris Grigsby have eight or more.

Also, Devin Davis may or may not be healthy for the season — we have no idea because, well, Gundy and the president and the NRA and such.

2. Gundy don’t care about the QB situation: If it wasn’t confirmed in the years 2005-2013 (and given the fact that Donovan Woods and Alex Cate both started real live college football games, I have no idea how it wouldn’t have been) Mike Gundy officially does not have a system within which he can easily tab a starting quarterback.

I would have bet Markel Brown’s bank account JW Walsh would be taking the first snap against Florida State and yet Gundy Badger is smokescreening so hard they’re going to have to call in the Pawnee County Fire Dept. to help extinguish the thing.

His chatter about rolling out somebody who hasn’t taken a real snap in a non-flag football game since before Brandon Weeden was a college starter against the defending college football champions is the stuff of legend.

At this point I wouldn’t be surprised to see him throw Tyreek Hill out there in the WildPoke for the first series and then do this up and down the sidelines after taking the lead as Jerry Jones and Boone exchange raised eyebrows from one of the suites at AT&T Stadium:

Nothing is off the table at this point.

3. Freshmen will play and they’ll probably play a lot: Did you see what happened the scrimmage last Saturday? There were “as many as eight freshmen on the field at the same time.”

The reasons are obviously two-fold.

First, as Kevin Peterson pointed out, this freshman class might be more mature than those in the past. Here’s what he said about freshman LB Gyasi Akem:

And second, as has been pointed out in every publication that covers Oklahoma State, college football, the Big 12, and possibly at this point by Daily Thunder and the Lost Ogle, OSU is one of the least-experienced teams in the nation when it comes to returning starters. Here’s the bottom of the barrel (returning starters on the right): 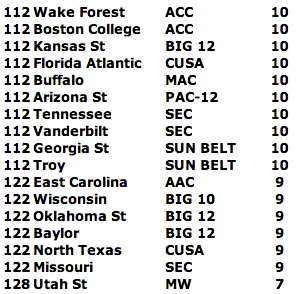 What this creates is an incredibly vague harbinger for the season at hand. As David Ubben pointed out yesterday, because of the QB situation and all those freshmen, OSU might be the biggest wild card in the conference.

4. Tyreek Hill could be a workhorse: If he stays healthy Gundy said he’d like to get The Freek “15 to 20 touches a game.” That’s Joe Randle territory. In fact, here’s a look at OSU’s leaders in total touches for the season in the Gundy Era (20 touches a game would put Hill at 260 for the year).

Of course when you do stuff like this maybe you should get all of the touches:

5. The stalwart is still stunning: It’s funny, really. For all the years we spent wandering in the desert — and it was a Gobi-sized desert dotted with the corpses of the Brad Girtmans and the XLKs of the world — it’s still crazy to me that defensive line has become such a force in recent years.

Other than Daxx and the FSU game I think the most surprising thing Gundy said this fall camp was the following:

“I think at the end or the middle of the year, our defensive line will be better than we were last year. We’ve got some depth there.”

You lost Calvin Barnett, Davidell Collins, Anthony Rogers, and Tyler Johnson from a defensive line that was, according to advanced stats, one of the 10 best in the country and you’re going to be better?

That’s incredible — and hopefully something that turns out to be true. If you can have a top three running game in the Big 12 (which OSU could) and a defensive line that dominates games you can compete for the conference. You might not win it but hey, this is our off year anyway, right?