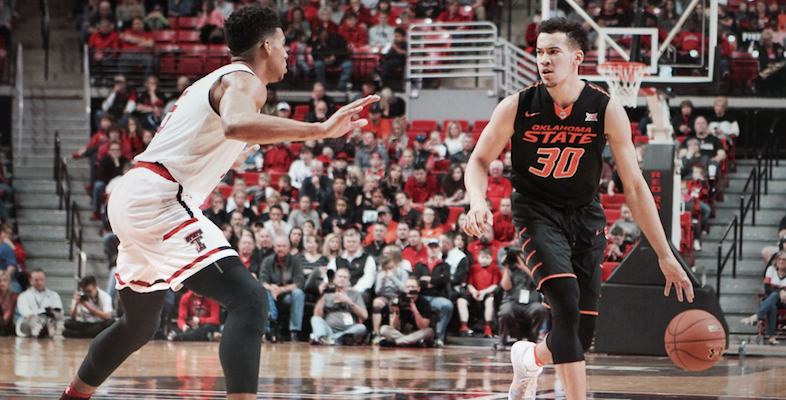 Oklahoma State finally got its first Big 12 win under Brad Underwood. And it was a sweet one without too much sweat shed, 83-64.

They did it with just two players scoring in double digits: Roommates Phil Forte and Jeff Carroll. They combined for 46 points and 15 rebounds (Miraculously, Phil was second on the team in rebounds with 6). And escaped with a milestone win. On the road, no less!

Jawun Evans just can’t stop getting into foul trouble. As a result of two first half fouls, he played just 11 minutes in the first 20 minutes. Given new life in the second half, he immediately (at the 17:56 mark) picked up his third foul and played just 6 minutes in the final half. He sat for a long, critical stretch as OSU fended off a Red Raiders run – and could have used him running the offense to stabilize things.

It’s more than just a trend. Foul trouble for Evans is becoming a habit. An every game routine.

Evan’s 17 minutes was the least playing time he’s received all season — tied with his 17-minute game against Texas A&M CC (for slightly different reasons). Over the last two games, Brandon Averette has been forced into a larger role, an average of 18.5 minutes to Evans’ 21.5. That recipe won’t stick moving forward though. Jawun Evans has to figure out a way to play aggressive, smart, and most importantly stay on the floor.

2. We got a taste of how Brad Underwood defense can close.

In Oklahoma State’s six-game losing skid, a crumbling defense down the stretch was among the biggest contributors. Against Texas Tech, it was quite the opposite. Clinging to an 11-point lead with 9:28 in the second half, Underwood’s defense put the clamps down. Over the next 7:33, the Red Raiders went 0-for-6 from the floor — and Oklahoma State forced them to shoot from beyond the arc as they tried to make up the deficit the quick way. A reversal of trends over the last few games that lead to quite a different result.

7-footer Lucas N’Guessan grabbed 0 rebounds in 2 minutes of action. Mitch Solomon pulled down 4 (all on the offensive glass!) in 22 minutes.

I mentioned this in the first note, but the teams leading rebounders ended up being two guards: Jeff Carroll and Phil Forte, who had  9 and 6, respectively.

Chalk it up to good misses. Or luck. Or whatever. But I sure didn’t see Forte banging with anyone down low. But I guess we’ll take it. The Cowboys turned a majority of its 12 offensive rebounds into quick points, finishing with 20 second-chance points (to Texas Tech’s 12).

4. A mental hurdle has been cleared.

I don’t care how old and experienced any team is, when you open league play winless through six that weighs on you. It creates a thought in the back of your head. As a former hooper that played on a fair share of really awful teams, it gets easy to accept losses. Even when you’re up big (Oklahoma State was up by 21 at one point in the game), it only takes a string of plays or a run from the opposing team to get a creeping thought back into your head. That “here we go again” feeling.

That was hurdled tonight. Jumping it on the road was even sweeter.

But I hate to point this out — have you ever ran hurdles? There’s more than one of them in the race. So while this was a nice first one, there’s still plenty to come. The Big 12 is a gauntlet.

We talkin’ hurdles? Winning on the road in the league is a tall one. And Underwood had to use a pole vault to get over it.

The last time Oklahoma State stole one on the road in the Big 12 was Feb. 9, 2015 against Baylor, when Le’Bryan Nash went for 22 and Anthony Hickey added 12 points and 7 assists.

So yeah, now we remember what it’s like to get a conference win on the road. And more could be coming soon. KenPom.com favors OSU in its next conference road game: At Oklahoma on Jan. 30.