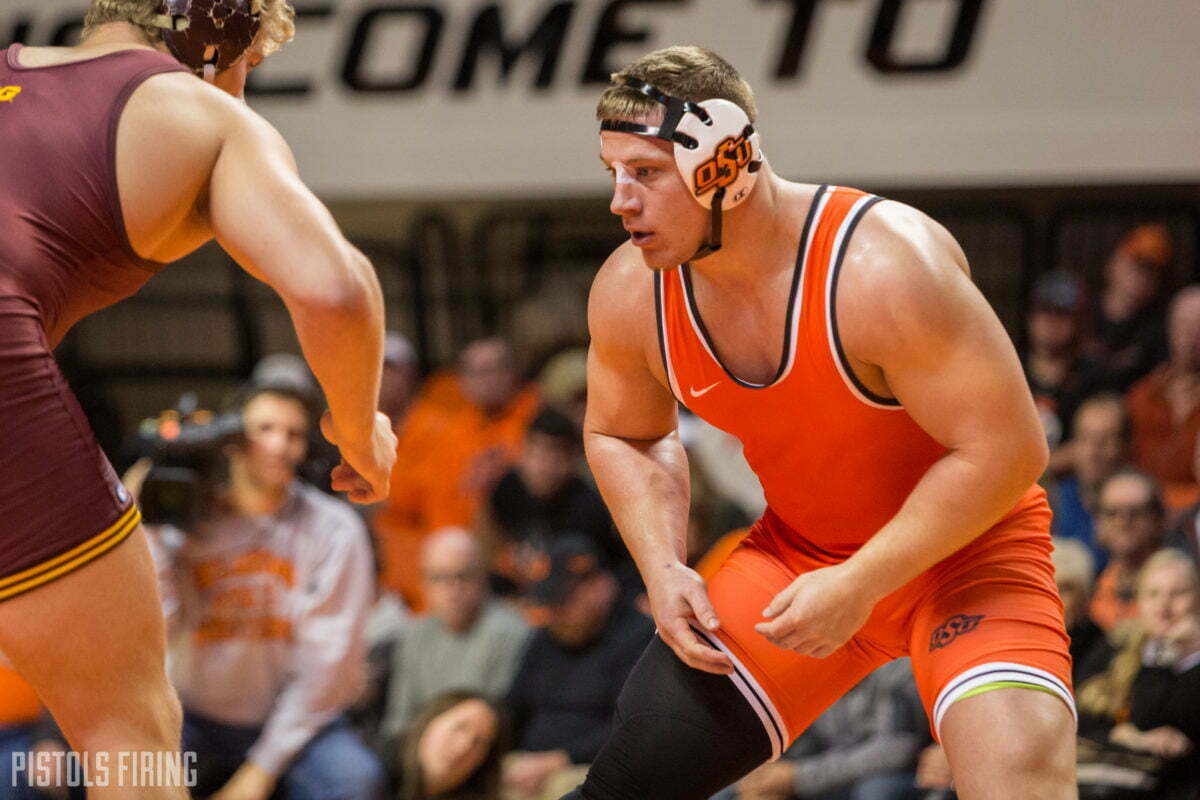 The Cowboys finished up their regular season with a dominant win over Fresno State. Here are my five thoughts on that match, the postseason and OSU moving forward.

This isn’t some big secret. We’ve known he was pretty solid but each time out, White seems to get stronger. I’m really interested to see what he’ll do this postseason. Most ranking outlets have him around 10-12. I have a hard time seeing him finishing that low. I think he’s All-American caliber (top 8) if he keeps up his current pace.

2. OSU will be healthy at key weights for the postseason

Based on the radio broadcast Jacobe Smith and Preston Weigel will both be back for the Big 12 tournament. Jonce Blaylock’s status is not quite as clear. Coach Smith has said Jacobe will be 100 percent when he’s back, but he hasn’t said that about Weigel. Hopefully Weigel will also be 100 percent.

At full speed I truly believe Weigel may be the best 197 in the country. He took one loss to a good wrestler in Willie Miklus from Missouri, while Weigel was hurt. He’s manhandled everyone else though including a guy from NC State who took out the No. 1 wrestler in the country Sunday. A full-speed Preston Weigel is a bad man at the NCAA tournament in my opinion.

Jacobe Smith is at a tough weight, but he’s a guy you want in the lineup also. I’m as big a fan of Jonce Blaylock as there is and really want him back healthy, but he’s not a guy you expect to make a lot of noise at the NCAA tournament. Though he’ll be missed it sounds like OSU will have the main guys you really want back in the lineup for the postseason.

Boo and Tristan both wrestled at 141 last year and made the bump up to 149 to fight for the starting spot there with Geo Martinez. All three are really good wrestlers, all top 20 at 149 and Boo/Moran could probably make 141 and would likely be All-American caliber there. Most schools would love to have that kind of depth at any weight. With that, some have speculated that OSU might try to bump the lineup to separate the log jam at 149. If so, could one of these guys successfully go up to 157? I don’t see it with either Lewallen or Moran.

Tristan wrestled tough to win, but he looked very undersized out there and Boo even looks small at 149 against a lot of guys. If they attempt to bump a guy from 149 to 157 it will have to be Geo Martinez. Even with a full summer in the weight room I don’t see either of these guys being able to. Maybe by their senior year, but not now.

4. The schedule sucked this year

John Smith has been pretty vocal about not liking the Cowboys’ schedule this year. He is not the type of guy to “sic the dogs” on a wrestling program like Fresno State that’s in its first year back in a dual with little significance in the season. In my opinion, he would’ve probably trotted out some backups, put some seniors in for the last dual of the year, etc. But with OU not wrestling the home-and-home and the trip to Italy, the Cowboys just didn’t get enough matches in. In a dual like this they had to wrestle everyone for the work and they overwhelmed an upstart program more so than they probably wanted to.

5. If you want to learn how to coach wrestling, wrestle for John Smith

ARMY TAKES THE STAR IN ANNAPOLIS FOR THE FIRST TIME SINCE 1961! #GoArmy #BeatNavy #SingSecond pic.twitter.com/zZaq9VSwZ6