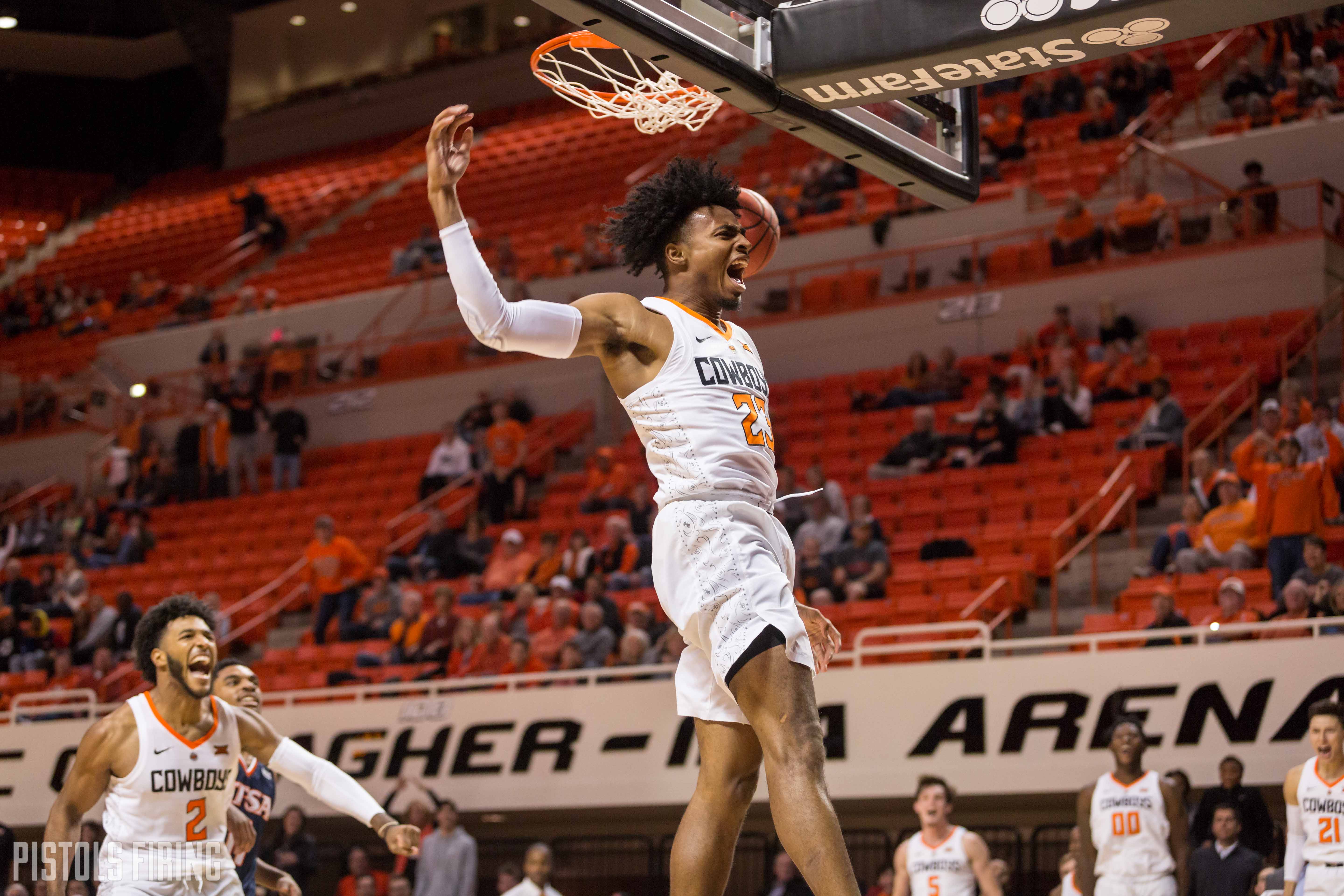 Instead of playing poorly at the end of the game like Saturday, the Cowboys got their growing pains out in the first four minutes Wednesday.

Oklahoma State went on to clobber UTSA, 82-60 in the first men’s game in Gallagher-Iba Arena this season after falling behind 9-0 to start the game.

It was another nice night from OSU’s three captains. Cameron McGriff, Lindy Waters and Thomas Dziagwa combined for a nice, even 50 points. McGriff picked up his first career double-double after scoring a team-high 20 points and bringing down a team-high 10 boards.

After about five minutes, it was a fun night for the home crowd. It was GIA’s first true look at the Cowboys’ young roster, and while there is still plenty of room to grow, OSU showed a lot of what it can be.

Here are five thoughts from the Cowboys’ home opener.

Thomas Dziagwa has shot 15 3-pointers this season, and nine have gone in.

OSU coach Mike Boynton challenged Dzaigwa to make 25,000 shots this summer, and he got them all done before the team even left for Europe. Dziagwa did a little bit of everything against UTSA on Wednesday night. He finished with 16 points, was 4-of-5 from 3, had six rebounds, dished three assists and had two steals.

With OSU down graduate transfer point guard Mike Cunningham to a hamstring injury and with Michael Weathers still working his way back into the lineup after his suspension, Dziagwa even played a little point guard against UTSA. Not much was asked of him as a point guard. He usually just had to dribble to the halfcourt line before chunking the ball to an open teammate to start the offense, but in halfcourt sets, he showed improvement in his passing abilities like this nice dish to Lindy Waters.

It’ll be interesting to see Dziagwa’s game against stiffer competition, but he has showed in his opening two games that he can be an offensive threat.

It looked for a moment the Cowboys were going to get run out of Gallagher-Iba Arena as the crowd had to wait nearly four minutes from the opening to tip to have a seat after the first OSU basket.

The Cowboys finally found their way inside, as their first 11 points came from either layups or free throws before finally hitting a triple. When they are hot, they’re hot, though. OSU broke off three 8-0 runs in the first half and two 9-0 runs in the second.

With the length the group has, it’d be nice to see them get inside more. There were times Wednesday were Thomas Dziagwa was the shortest Cowboy on the floor at 6-foot-4. OSU’s roster is filled with shooters, as even Kentrevious Jones and Yor Anei will pull from 3 if left open, but it seems in this two game sample size that they’d benefit working inside out more.

3. Duncan Demuth is a Grinder

I was a little shocked Duncan Demuth played 17 minutes against Charlotte — tied for second most of any freshman — so I asked Boynton about it.

“I trust him,” he said. “He’s a smart kid. I think he’ll always make sure he’s in the right position to execute. I think Cowboy fans all over the state and all over the country will come to feel like, ‘Man, this kid from Clearwater, Florida, is one of us.’ I don’t want to put him in Mitchell Solomon’s echelon quite yet in terms of the way he plays, but that’s the way he’s trending. All out effort all the time. Someone you can totally depend on.”

Demuth’s Solomon-like features showed Wednesday. In his 21 minutes, Demuth’s jersey was sliding across Eddie Sutton Court more times than I cared to count. Demuth’s prominent statistics weren’t eye-catching. He finished with four points, five rebounds and a steal. He was also a yikes-worthy 0-of-4 from the free-throw line. But despite that, he finished +15, tied for the third-highest on the team and the highest of any OSU bench player.

At one point in the second half Demuth chased an offensive rebound from under the basket to center court, he dove with a Roadrunner, forcing a jump ball, and GIA erupted. 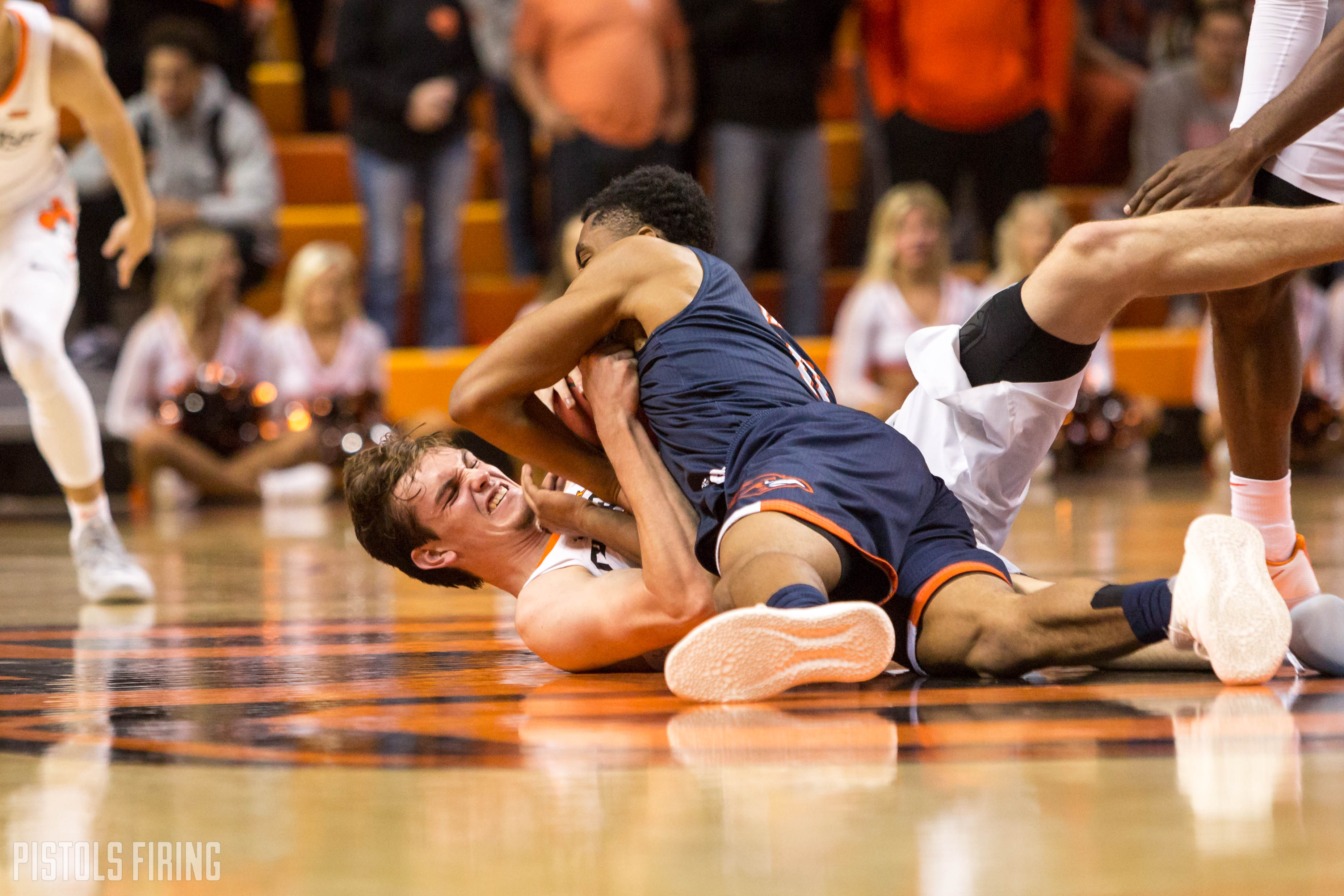 4. Yor Anei Could Block a Shot from Bennett Hall

I wrote in an earlier post that Yor Anei is coming for OSU’s career blocks record, and he took steps one through four of 222 Wednesday night.

Anei, a freshman, is 6-10, but on top of that, he could almost tie his shoes standing straight up. He picks up his swats in a variety of ways. Sometimes he’ll goad who he is guarding to think they’re a step ahead of him just for him to send the shot off the backboard. Or, if someone wants to watch the ball boomerang over their head, you can try pulling up a few feet in front of him and watch him highpoint the ball like he is Richard Sherman (Seahawks Richard Sherman) like this.

Anei still has plenty to work on. He had only two points and two rebounds to go with his four blocks, and he was one of only three OSU players who finished in the negative at -2. When OSU struggled out of the gate, Boynton went through Anei, Kentrevious Jones and Maurice Calloo at center, subbing them out on back-to-back whistles. I think Anei’s offense will come from the little I’ve seen in practice, but sheesh it’s fun watching him smack shots from the sky.

Would you just look at this?! (Again, what a shot from Jackson) 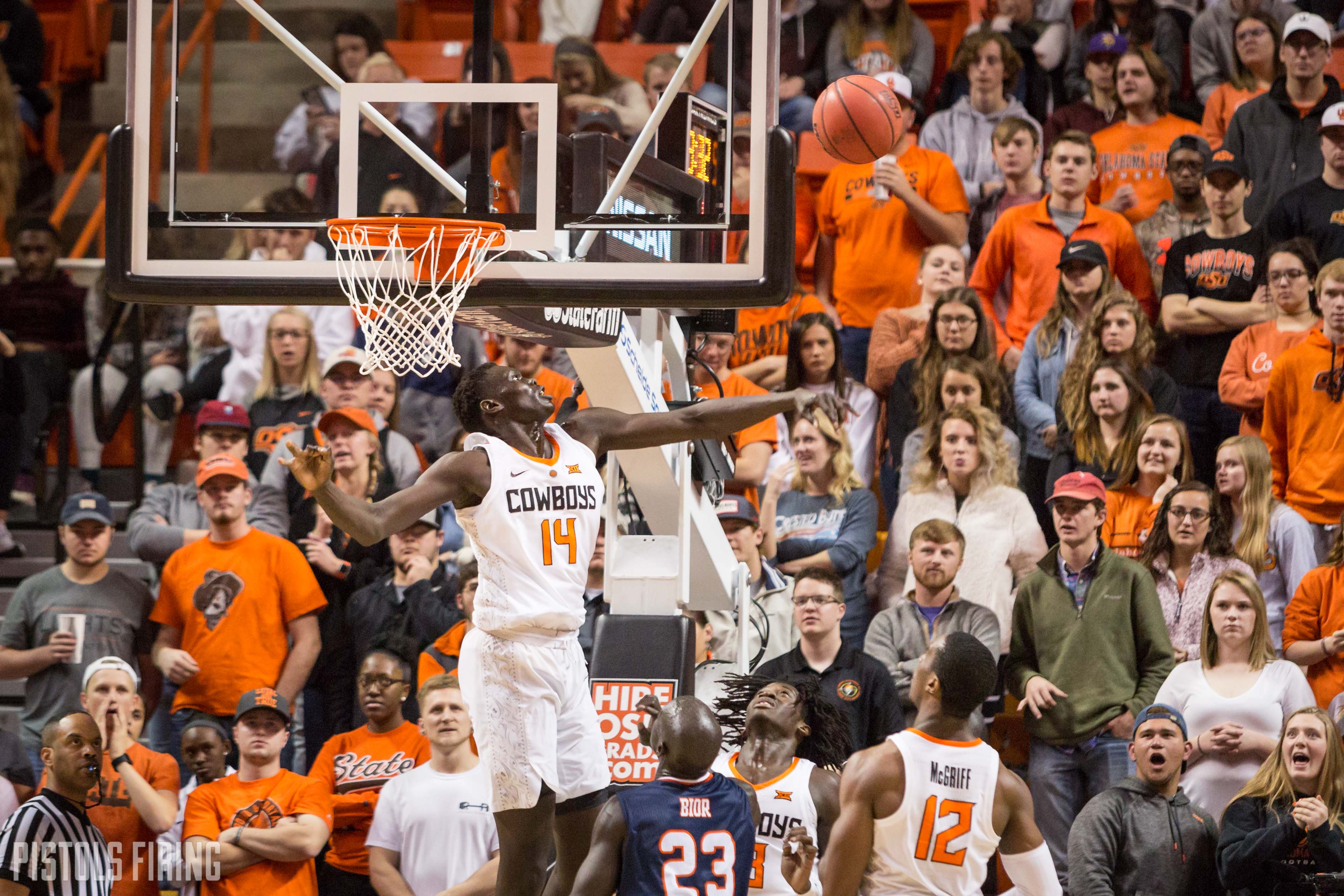 Michael Weathers has seen more than a season’s worth of OSU basketball from the bench, and finally with 3:15 left in the game, he got to play.

Weathers entered to a nice ovation after being suspended for much of the school year. When he entered, UTSA was pressing, and freshman point guard Isaac Likekele, who had already played 30 minutes was looking a little gassed. Weathers handled the pressure well. One the Roadrunners’ first attempt to press him, Weathers blew by his defender up the sideline and was able to set up the halfcourt set.

On UTSA’s second attempt, Weathers cooly flicked the ball over his head in a sequence that got the newly scholarshipped Trey Reeves an open 3. Reeves air-balled. Reeves got a rebound off UTSA’s ensuing possession, and all of Weathers’ waiting and looking on from the bench was finally realized.

Oklahoma State has three days off before another home game Sunday against Charleston.