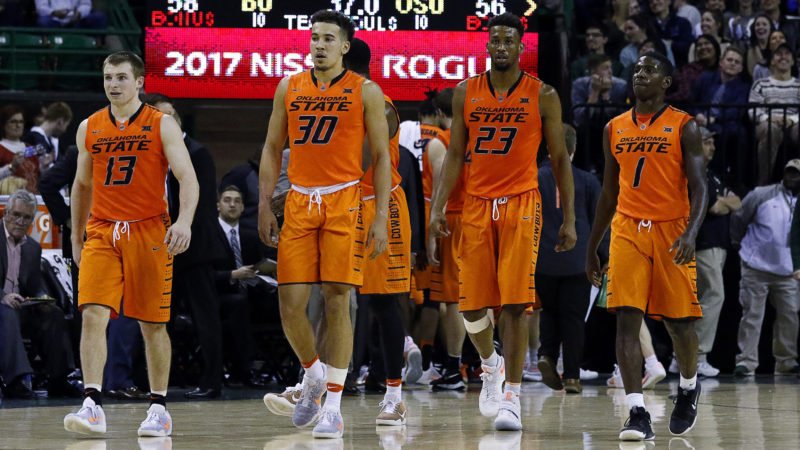 The Cowboys dropped another road game on Saturday night. It wasn’t exactly a surprising outcome but reinforces the fact that the Cowboys have a ways to go to contend in the Big 12. Here’s our instant recap as well as a notebook. On to the five thoughts.

1.Baylor has never held a No. 1 ranking

That’s enough to keep the No. 2 — and hottest team in the nation — engaged for a home game against an 0-2 Oklahoma State team. Especially since No. 1 Villanova lost earlier this week.

Baylor knew what was on the line, but so did the Cowboys. After a messy start early and Evans being sent to the bench with foul trouble, the Cowboys were active defensively and on the boards and seemed in control for good stretches of the game, even taking a five-point lead into halftime and for most of the second half. Unfortunately it was not enough to hold off the undefeated Bears at home.

2. The Cowboys were outmatched in the front line

Lucas N’Guessan may be the best option Brad Underwood has to start at center but that is less of a compliment for N’Guessan than it is an indictment on the Cowboys’ front-court depth. Mitchell Solomon was Underwood’s man most of the way, mostly due to his size but fouled out for the sixth time this season.

N’Guessan registered a blank stat line in six minutes aside from his two fouls and one turnover. These nights are going to happen with a true freshman but that comes as little consolation to Oklahoma State this night. Solomon scored three points on 1 of 2 shooting and grabbed four rebounds in 20 minutes.

That’s obviously not great against the trees Baylor has on scholarship.

3. Oklahoma State was forced to play Baylor’s style of ball

The Cowboys struggled with the Baylor zone. If you are the type of team, playing the style OSU does, you can’t score 22 points in a half (the second one) and expect to win. You also can’t expect to lose the turnover battle and have a chance, either.

Jawun Evans needs to stay out of early foul trouble. This is not the first time that Evans has picked up two (very) early fouls. He got called for his second one with just under 14 minutes remaining in the first half. Evans finished with eight points on 2 of 12 shooting. He dished out five assists but had three turnovers and never really seemed to get it going other than a play here and there. These are the types of games he needs to take over.

The Cowboys, who came into Saturday ranking fourth nationally averaging over 90 points per game, were held to 57, and it’s kind of hard to see how they eclipsed 50 after watching the second half.

It would have been really ugly had it not been for Thought No. 4.

4. Phil Forte had his best game this year

We’ve seen glimpses of a possible shooting streak awakening this year. Hopefully this is a sign of what’s to come. Forte looked for his shot from deep — way deep. That’s about the only way he’s going to get off a 3-pointer apparently. The Cowboys need more of that.

As Kyle Porter pointed out in our slack conversation, this is a different team when Forte is on. Unfortunately, Jawun Evans was not.

5. There are no moral victories

The Cowboys actually did play Baylor’s style of ball and had a chance to win very late — against the No. 2 team in the nation, on the road. Despite the front-court mismatch, the Cowboys won the offensive rebound battle 19-7 (35-30 on total rebounds).

But … Oklahoma State is now 0-3 in Big 12 play. Not the way we all probably saw this starting out but maybe we should have. This is an incredibly young team with a couple of deficiencies — especially along the front line. The Cowboys just do not have anyone on the roster than can go toe-to-toe with some of the front courts they are going to see.

The Cowboys continue their tough stretch welcoming Iowa State to Gallagher-Iba on Wednesday night and then head to Lawrence to take on Kansas on Saturday. Is Brad Underwood going to start off 0-5 in Big 12 play? It’s very possible.