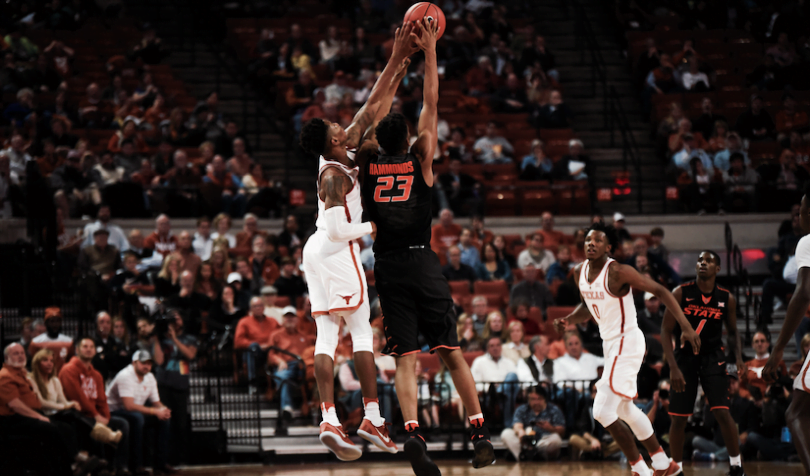 Oklahoma State’s 0-1 start in conference play after falling to West Virginia was understandable. But it’s loss to Texas was nearly inexplicable. Without one of it’s key members of the backcourt in Kendal Yancy, Oklahoma State was outdueled 82-79 in Austin. Here are five thoughts from the game.

1. This is a major blemish on OSU’s NCAA tournament resume.

At this moment, Texas is not an NCAA tournament team. It’s biggest win to date according to KenPom is now … Oklahoma State.

The Longhorns have losses to K-State, Kent State, UT-Arlington, and Northwestern. So while this is Texas’ best win on the year, this also happens to be OSU’s worst.

I pegged OSU to finish fourth in the conference, which would likely earn them a 7ish seed in the tourney. But the Big 12 is deeper than last year. TCU is no slouch this season under Jamie Dixon, Texas Tech just knocked off West Virginia, and Kansas State looks like a totally different team from last year.

The margin between missing an invite to the NCAA tournament and grabbing a 7-seed is much slimmer than last year. Losing to a team like Texas doesn’t help your chances.

2. Foul trouble will be an issue for OSU all season.

Oklahoma State’s physical man-to-man defense causes all types of problems for teams on offense. Unfortunately, it causes OSU problems as well. Jawun Evans fouled out. Solomon and McGriff and N’Guessan all finished with four.

Evans and N’Guessan in particular have continuously jumped into foul trouble which gives Underwood no option but to go to his bench early. N’Guessan only played 11 minutes and, while Texas’ big men were a bad matchup for him, it’s still a concern given the lack of depth in the frontcourt. I think we know what Mitch Solomon can give and I’m not sure Underwood is comfortable playing him more than 10-15 minutes per game.

Remember that guy? He was a starter early in the year? He hasn’t played since the Georgetown game in mid-November. And after averaging more than 6 points per game last season, he could have been extra firepower on offense at the wing and gives OSU added size.

This is what John Hesley said about his chances for returning.

I'd say doubtful, at this point. https://t.co/PJteeGtS8Z

Given that Big 12 play has already ramped up, it doesn’t make much sense to get him back soon. Freshman Lindy Waters has essentially taken over his starting role, and done so very well. But he was out against Texas with an injury suffered in practice.

Depth is a problem and Shine’s absence potentially for the season could be damaging.

I’ve been the slowest passenger to board the Dziagwa hype train, and I’m still riding with one leg out of the window. But everything he throws at the rim gives me a warm feeling. Yet for some reason, Phil Forte played 38 minutes, and Dizzy played 14.

I’m not saying the two should up and switch roles right away. I really don’t know if Dziagwa’s ego could handle playing more than 25 minutes per game as a freshman. But maybe balancing out time between the two — and giving Forte some rest! — may help keep a balance of fresh bodies and lead to some better shooting percentages. Anything to attempt to get Forte out of his slump is something I stand behind.

5. This sets up a monster road game on Saturday in Waco.

In other Big 12 news, Scott Drew’s Baylor Bears are ranked No. 2, and survived a scare from Iowa State on Wednesday evening.

The only thing standing between Baylor and a No. 1 ranking when the AP poll comes out on Monday is Oklahoma State’s tilt with the Bears in Waco on Sunday evening. And I can guarantee Brad Underwood isn’t about to fold over in Waco and fall to 0-3 in conference play without a fight.