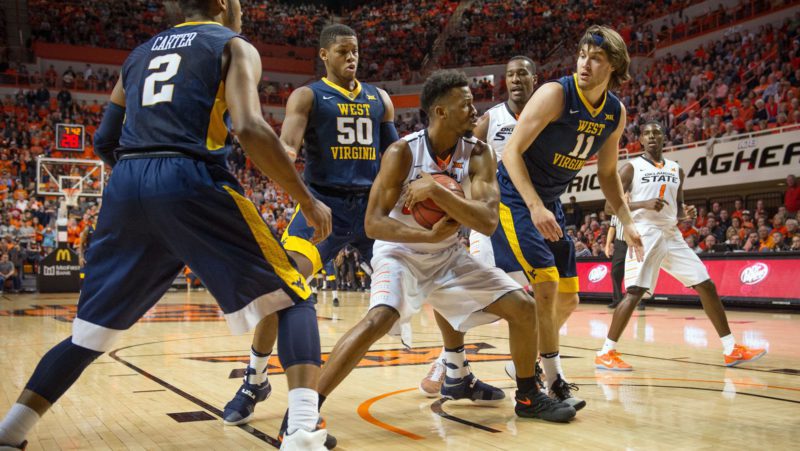 The Brad Underwood era cracked the seal on conference play by welcoming West Virginia in the first sellout of Gallagher-Iba in nearly two years. The Mountaineers proved to be more than a test for the young Cowboys. Oklahoma State wasn’t able to get it close enough to get the crowd really rocking, though, behind West Virginia’s hot shooting.

Here’s five thoughts on the game. You can read the notes from the game here.

1. OSU’s defense wants to be West Virginia’s defense when it grows up.

This isn’t news to anyone, but the Cowboys got their first taste of conference play early. West Virginia swarmed. They double teamed and had a hand in every passing lane. They did what OSU has been doing to non-conference opponents all year — just at a much better, more efficient level.

While West Virginia pressed early and often, the Cowboys showed their age a bit and at times looked completely out of sorts on defense. Missed assignments led to easy buckets for West Virginia. And offensive rebounds and second chance opportunities were absolute back-breakers.

This OSU team has a lot of young talent and plenty of promise but a long way to go.

2. If Jawun Evans is not on the court, OSU is not quite as good.

Another news flash, I know.

Evans got his second foul on a nice flop with over 12 minutes remaining in the 1st half and spent a good chunk of the rest of the period on the bench. Underwood knows he needs his best player on the court which is why he was trying to protect him late in the first half, subbing him out on defense.

The Cowboys started 3-for-12 from the field. Every Cowboy miss seemed to lead to a basket on the other end, helping the Mountaineers to an early double-digit lead.

Early in the second half, the Cowboys showed more energy (and with Evans back in the game) they started 4 of 6 while holding West Virginia to 1 of 5 to start. They cut the West Virginia lead down to eight where it kind of hovered for a few minutes.

Then Bob Huggins went full press again and completely knocked OSU out of sync. Turnovers and struggles to get into their offense ballooned the Mountaineer lead to 18. At that point the game was pretty much over.

Also of note, the bench contributed just 20 points. Coming into Friday, OSU was fifth nationally, averaging 41.7 bench point per game. That statistic alone says something about how good (and how bad) OSU can be with and without Evans on the floor.

Hammonds finally took the lid off the basket from three with about 8 min left in the first half. The Cowboys missed their first four tries from behind the arc.

Aside from Hammonds, the Cowboys were scoreless from three until just under 8 minutes remaining in the second half when Phil Forte made his first 3-pointer.

He did go on to make four but most came in garbage time. This was probably just as much a product of West Virginia’s defense as it was Phil’s shooting stroke.

But it was a big deal, none the less.

Here’s a look at the 3-point attempts for the Cowboys.

The two teams did end up about even in 3-point percentage, but (again) that was largely due to some hot garbage-time shooting by Forte.

4. This is still a very young team.

Turnovers were an issue (especially the unforced kind). The Cowboys had too many of them. Plain and simple. Five-second rule violations. Half-court violations. You name it. That Press Virginia got to them and there were stretches when they looked completely lost.

Again, I’ll repeat that this team got a great example of the type of team they want to be.

The Cowboys came into this game third in the nation, forcing their opponents to commit turnovers on 26.1 percent of their possession. But here’s the problem: West Virginia was first at 35 percent.

This is to be expected, though. You can bet there will be plenty of “teaching moments” in this post-game film session for Brad Underwood.

The crowd was great, holiday break notwithstanding. The house was packed. I thought the fans seemed pretty engaged (from my bedroom/office) even when OSU was down big.

It’s obviously not the result anyone wanted or envisioned when they sold out the joint this week. But we have to remember this sis basically t same team that missed the NCAA tournament and wound up winning 12 games last season.

This is still a very young team and there will be ups and downs. There’s no shame in losing to the 11th-ranked team in the country.

Next Up: The Cowboys head to Austin to face the Longhorns on Wednesday. Tip is set for 7:00 p.m. CST.