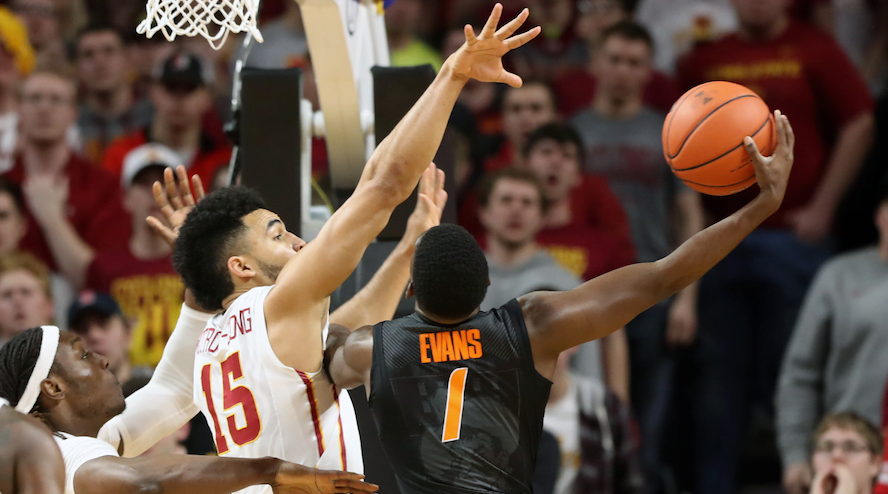 Iowa State’s streak of recent dominance over Oklahoma State continued on Tuesday night in Ames, but boy did OSU have every opportunity to end the string of series woes. The Cowboys trailed for more than 30 minutes of the game, finding itself down double digits late into the second half — a trend OSU has made a recent habit of. But unlike the recent trend of overcoming those deficits, hot shooting from ISU and costly mistakes down the stretch killed OSU’s chances of making it six straight wins.

The curse at Hilton will live on for another season.

1. On that controversial last play

So here’s the scene: Oklahoma State, riding a furious comeback, has a chance to erase its second half deficit. With under 10 seconds to play, Jeff Carroll tossed the inbounds pass to Jawun Evans, but after a deflection by Monte Morris and a subsequent review, Iowa State received possession after the officials overturned it to the Cyclones.

Based on my interpretation of the officials interpretation of the play, Carroll touched the ball having not fully established himself in the field of play, so to speak. So even though none of his body parts were touching out of bounds, his right foot had not established itself inbounds. It’s a 50-50 call, especially looking at when Morris touched it and where his foot was. Had the original call been Iowa State’s ball, I would have had no issues. But because the officials originally awarded OSU the ball before overturning it, I have a hard time believing any conclusive evidence that they come up with on that play.

2. You play with fire, you eventually get burned

This team has made a habit all season long of doing one of two things: Either blowing the doors off lesser opponents, or falling behind by double digits before mounting a comeback. The latter has been more of the recent trend.

While I venture to say strong second halves are a sign of a solid team, I’m concerned about the second half deficits being a recurring theme. It’s one thing to do in conference play when you’re fighting for no more than Big 12 seeding, but if this continues into postseason play, you might be setting yourself up for failure in March. OSU was nearly able to overcome the deficit tonight, but this might be a lesson that forces a little more intensity and focus early in the game to not fall behind. You can only win so many riding Jawun Evans hot hand.

Count those among words I would have never predicted I might write in the preseason, but it’s true.

Look, Solomon isn’t an ultra-athletic rim-running big man who is going to wow you with high-flying dunks. Nor is he the type of player who is going to defend particularly well on the perimeter. But he’s a legit post man defender, he can step out and defend the pick and roll efficient enough, and he’s evolved into a heady player who uses his verticality well. Most importantly, he’s done a much better job of staying on the floor of late.

Solomon has found his niche not only as a solid defender and efficient rebounder, but as a second-chance creating machine. And the best part is that he knows his role and is thriving in his own lane.

4. Jawun Evans was that dude, again

The game went from tight to nearly out of hand about midway through the second half, and that was exactly when Jawun turned on the jets. He has a feel for the game and a pulse for when to take over, and he worked his magic perfectly. When OSU was lifeless, Evans found a way to get the rim at will. And when they needed a bucket, he was there to swoop in from 25 feet to drain a triple.

The best part is that he’s finding ways to earn buckets in different ways, whether it’s getting to the free throw line, driving the lane, or flashing his midrange game. When OSU had the ball with under 10 seconds, we don’t know what play Underwood had drawn up. But the odds-on favorite would be a “hey, let’s give Jawun the ball and everyone step away” play. Which is my favorite play of all time.

5. Where OSU stands in the big picture

Joe Lunardi at ESPN has OSU as a 6-seed, and Jerry Palm has OSU as a 7-seed. Right now I’d say a 6-seed is where OSU finishes, and that’s predicting OSU wins on Saturday against KU.

To be honest, that is exactly where OSU wants to be. Any lower (an 8-seed) would position them to immediately play a 1-seed after a first round win. But a 6-seed would give a much more favorable matchup in the round of 32 to a team like Louisville or Butler or any team who lands on the 3 line. We’ll know a heck of a lot more after Saturday after the KU game, but the good thing is that everything from here out is about improving seeding. Because OSU is definitely in the field.