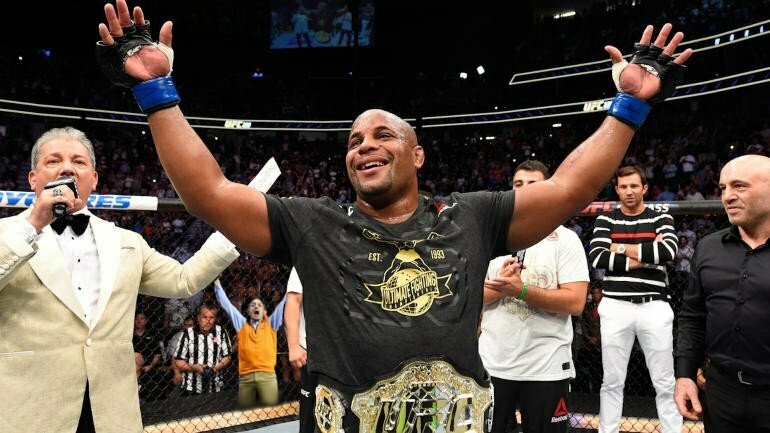 With Daniel Cormier officially announcing his retirement and fighting what looks like will be the final fight of his career on Saturday I thought I’d share my five thoughts on the fight, Cormier’s career and retirement, and OSU MMA in general. Let’s dive in.

Cormier is certain to be a Hall of Famer and is undoubtedly going to go down as a legend in the sport of Mixed Martial Arts.

2. Long career as a commentator

Cormier is not just good on the mic, he’s great. Most of the time when he’s not actually fighting, he’s calling fights for the UFC, and he’s very good at it. He’s obviously a great fighter, and typically a person that is an expert in an area will often struggle to communicate things to people that aren’t experts in that same area. He doesn’t have that issue. He breaks things down so that the most novice fan can understand them, and he has a good relationship with Dana White that should keep him employed with the UFC for a while.

3. Will he really be done for good?

Cormier announced this as his retirement fight and in the post-fight interview declared that was still his intention, but we do often see a lot of fighters come out of retirement to fight again.

The way this one went down is a weird way to see him go out. Going out on a loss is not uncommon, but an eye-poke played a big role in how it played out, and this was also just a weird environment with COVID-19 and no crowd. So maybe there’s a little bit of a bad taste there and he’ll want to give it at least one more fight? He’s made some money though and as a family man and a guy who got a bit of a late start in the sport, maybe there’s just no interest in that?

The interesting thing with Cormier to me is his ability as a commentator. He’ll at least have a steady income there for some time, so I don’t think the financial incentive will be much of a factor. It will probably largely be dictated by whether or not he really has that itch to fight again.

Cormier fought his first MMA fight at 30 years old and didn’t break into the UFC until the age of 34. On one hand, it’s easy to look at it and wonder if he would’ve done more had he started earlier. Maybe he would’ve risen the ranks of the UFC ladder a bit quicker and would’ve had a few more titles and wins to his name. Maybe spending his long career in wrestling allowed him to build a maturity about himself to be able to handle the pressures of the UFC a bit better.

Who really knows how it would’ve gone. Regardless, he’s one of the best fighters ever so I think it all worked out fine, but I think you could certainly wonder if he could’ve won a few more titles had he started fighting before his 30s.

Since the birth of the sport of mixed martial arts and the UFC, Oklahoma State wrestlers have been a factor in the sport. Don Frye and Randy Couture both won a few of the early tournaments, and Couture had a long career lasting all the way to 2011. As Couture’s career died down, Cormier and Johny Hendricks emerged as stars, and both eventually held UFC titles while Mark Munoz, Muhammad Lawal, Jake and Jared Rosholt and Shane Roller all carved out respectable MMA careers themselves.

I don’t think you could say enough about what Cormier has done to try and help that legacy continue. He’s brought Kyle Crutchmer, Jacobe Smith, and Nick Piccininni under his wing at AKA, and all signs point to those three being part of the new generation of Cowboys in the sport. You also wonder if maybe a Jordan Oliver or others that are making their runs at the 2021 Olympic team will follow the same path as Cormier once they’re done wrestling.