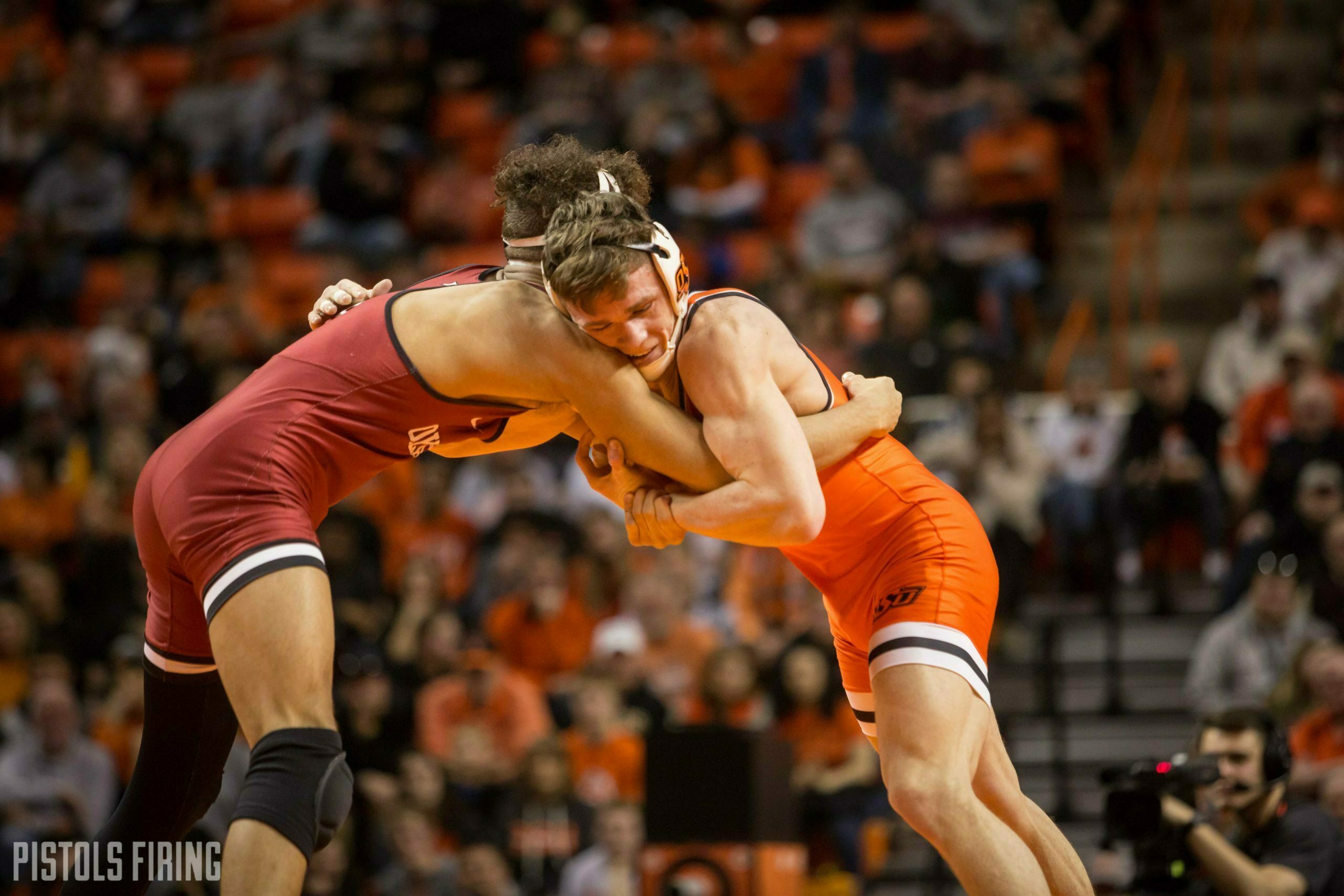 The Cowboys rolled in another Bedlam dual over the Sooners 27-8 on Sunday. Here are my five thoughts on how it all went down.

To be candid, OSU’s situation at heavyweight isn’t the best we’ve ever seen. They’ve exchanged starters between Austin Harris and Cornelius Putnam throughout the season and neither looks as though they’ll qualify for the NCAA tournament. Football player Brock Martin is now on the team, and many think there’s a chance we see him at the Big 12 tournament.

You still have to love the effort from Harris, a guy that’s naturally probably a 197 and started his career out at 174. He won both matches he wrestled vs. OU, the school’s biggest rival, and picked up a big toss-up win vs. Princeton that kept OSU from dropping the dual to them.

Harris probably won’t go down in the history books as some legend at OSU, but it’s hard not to respect the effort and how he’s stepped up for the Cowboys. Especially when on paper very few people had him pegged as a guy that would hold down the starting job at heavyweight coming out of high school.

This Bedlam victory was OSU’s 11th straight in a lopsided rivalry between two of the sport’s most historic programs. The Cowboys have always had an edge in the series, but matches of late have not been very competitive. On Sunday, OU brought some fire. They pulled off mild upsets at 174 and 197 and were competitive in a number of matches that they traditionally haven’t been. Had they won a few of the other toss-ups and maybe pulled an upset, they could have reasonably won the dual.

It’s hard to see OU in any position like they were this year to even have a shot to knock off OSU anytime soon. The Cowboys graduate two starters in Joe Smith and Nick Piccininni, but have a host of young talent already on the roster and even more coming in next year with the No. 1 recruiting class in the country. Not to mention, they also return Daton Fix.

The Sooners are young, but it’s still hard to see them finding a way to be competitive with OSU anytime soon with everything OSU brings in next year. Maybe they will? Personally I think it sets up for OSU to build on this 11-win streak in the series with quite a few more wins before OU is competitive enough to win Bedlam duals.

I’m likely in the minority of OSU fans here, but I prefer Bedlam to at least be competitive. I just don’t see it happening any time soon.

With all the conversations in college sports — specifically revenue sports (basketball and football) — about dwindling attendance, wrestling has seen a lot of growth lately, especially at Oklahoma State.

All the big guns out for Bedlam wrestling! pic.twitter.com/njWs9iD2bg

Here is how attendance broke out for OSU this season.

It’s pretty remarkable that this happened in such a rebuilding year, while OSU was redshirting their biggest star in Daton Fix, and did not wrestle Iowa in Stillwater. I’ll be really interested to see how the trend continues as OSU brings in this elite batch of recruits next season.

4. Cowboys bounce back in spots

Earlier in the season the Cowboys won the Bedlam dual in Norman by a score of 23-9. This time OSU got bonus points in a few spots they didn’t last time and two individual matches were flipped, landing them in a similar dual score of 27-8. Dakota Geer fell to Jake Woodley, who he beat earlier in the season, and Wyatt Sheets knocked off Justin Thomas who beat Sheets 5-3 in Norman.

One useful angle to look at the two Bedlam duals is how are guys improving and/or developing as the season goes on? There’s no real concrete way to define this, but if a wrestler loses to a wrestler early in the season and beats him late, then it’s usually fairly safe to assume the wrestler that won late has made some adjustments and gains throughout the season. With the Cowboys this was a bit of a wash. One guy avenged a loss and one was avenged.

5. Piccininni goes out on top

Nick Piccininni and Christian Moody have spent all four years of their college experience as Bedlam rivals. Piccininni has had a clear edge in that matchup for the most part. Moody — like most of the rest of the Sooners on Sunday — brought some fight to their matchup.

Moody had picked up a few takedowns in the match and seemed as though he might storm back late. He took a shot and Piccininni locked up a cradle to get a huge fall and close out his career by firing up the crowd in Gallagher-Iba one last time.

Pretty cool moment for a kid that is certain to go down as a Cowboy fan favorite.