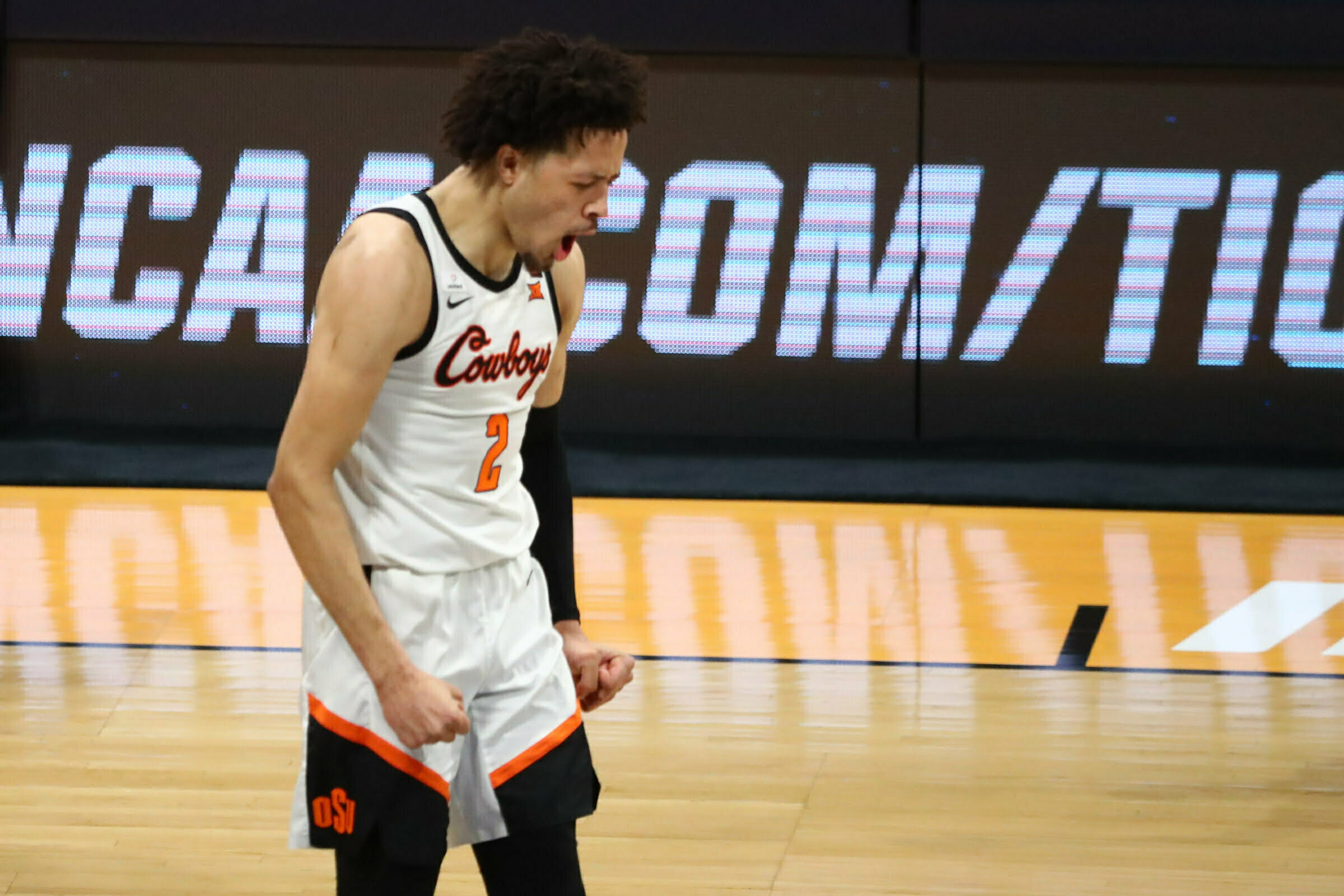 INDIANAPOLIS — Through a pandemic and a would-be postseason ban, the Cowboys’ season is in the books, and it was a dang fun one.

Oklahoma State fell to Oregon State in the Round of 32 on Sunday night/Monday morning. Instead of writing about a game that now doesn’t matter a whole lot anymore, here are five thoughts on the Pokes’ season.

I stepped on OSU’s campus as a student in the fall of 2014, the school year after Marcus Smart left, and frankly, OSU’s basketball program has been mediocre since then.

There were some good players: Jawun Evans, Phil Forte, Jeffrey Carroll. But the results just weren’t there consistently until this year.

There is an argument to be made that this is the best season of OSU hoops since 2012-13, but there is a better argument that this was the Cowboys’ best season since 2005 when the Cowboys made the Sweet 16 as a 2 seed. When Eddie Sutton was the coach.

This last game was a disappointing finish, but this year provided so much. It was like a movie. The postseason ban with the best player in college basketball. The early struggles. The rescheduling of games that gave OSU a ridiculous draw that it ran through. It was all great.

This is going to go down as an all-time season in OSU’s history.

This is the first season of Mike Boynton’s tenure where he had a roster full of players he recruited.

I asked Boynton about the significance of this team of this being a team full of his guys after Selection Sunday. He credited his four seniors from last season and Mitchell Solomon, Jeffrey Carroll and Tavarius Shine, but he did mention that it isn’t a coinincidence that his best team came this season.

“It is a little different, though, when you’ve sat in a kid’s living room and you’ve told this family you’re going to do this for them,” Boynton said. “There was a time I remember in that huddle against Baylor [in the Big 12 Tournament] that I told every single one of those kids, ‘We recruited you here for this moment.’ And it’s real. I’m not selling them anything. They feel that, and they understand that I believe that they can get the job done. So, I do think that it helps when we’re in those tough situations that they know that they were recruited here and they came here to do this together under the leadership of the staff.”

Perhaps the best part about how fun this team was to watch this year was the fact that most of them will still be running around Eddie Sutton Court for the next two or three seasons.

Cade Cunningham was OSU’s best player this year, but Avery Anderson was the most fun to watch. He was just a sophomore. In his final 10 games of the season, Anderson scored in double figures nine times, and on seven occasions he scored more than 15 points.

As fun as Anderson was to watch, it doesn’t stop there. Kalib Boone, sophomore; Matthew-Alexander Moncrieffe, freshman; Rondel Walker, freshman; Keylan Boone, sophomore. Then there are guys like Chris Harris and Donovan Williams who essentially had a redshirt year nursing injuries.

This group will have some things to figure out with the presumptive loss of Cunningham, but the Cowboys have a strong nucleus for at least next year and the year after.

The last time OSU lost an NCAA Tournament game, the Cowboys’ coach was on a plane to another school shortly after.

I wrote on Feb. 22 that OSU needed to pay Mike Boynton, and the same is true on March 22.

Boynton is the lowest-paid coach in the Big 12, and his run these past few weeks shows he has earned more than that. Boynton will be on nearly every list that of possibilities of coaching hires for open jobs over the next few weeks and months, whether the possibility is legitimate or not.

Boynton has made OSU basketball fun again. Whether it is the fun team, big fist pumps, the showing up at a baseball game hours after a big win in Morgantown or always saying the right thing at the exact right time, Boynton has given this program a foundation after years of something just feeling off.

It would be a shame for OSU to have to hit the reset button again, and it’s also a shame that he is the lowest-paid coach in the Big 12. Money is tight in a pandemic, but for a Power Five athletic program, this should be a necessary expense. You have your guy. Don’t lose him.

“I’m very, very thankful to Mike Holder,” Boynton said. “What you saw out there today, although in defeat, was a representative of what he believed I could do as the leader of this program. His belief in me will never be something that I take for granted or overlook.

“Salary talks and all of that stuff, we’re not having that kind of conversation at this point. If that’s something that’s necessary then, at the appropriate time, we’ll have those discussions. Obviously, my focus was on trying to get this team a win tonight. As we move forward and get back to Stillwater, I’m sure when the appropriate time is to have discussions about those things, it’ll happen.”

Cade Cunningham is the most skilled basketball player to ever wear an OSU uniform.

Cunningham said “I don’t know” when asked if that Oregon State game was his last as a Cowboy. A fair enough answer, but it’s highly unlikely he returns considering he is more than likely going to be the No. 1 NBA Draft pick this year.

From the time he committed when I was sitting in my car in the Boone Pickens Stadium parking lot until the final horn of Sunday night’s game, Cunningham has had ridiculous expectations placed on his shoulders, and he reached and exceeded nearly all of them.

He led the Big 12 in scoring despite not being a pure scorer. He won the Big 12 Freshman of the Year and Player of the Year awards. He became the program’s first AP First Team All-American. He ripped the Sooners apart in Norman.

The most important thing Cunningham did for OSU basketball was that he chose to be a Cowboy twice.

He chose to come to a program that had been mediocre most of his life in a time where the Cowboys had a young coach who hadn’t won yet.

Then he chose that same program again when the NCAA tried to get him to reconsider by hitting the Cowboys with an egregious postseason ban.

Cunningham made OSU basketball relevant again, and if the administration can keep Boynton around, it looks like Cunningham simply choosing OSU (twice) should show others that anything is possible at Oklahoma State.

“I feel like this is just the beginning for Oklahoma State,” Cunningham said. “I’m just happy that I’ve been able to be a part of this. I appreciate them a lot more than they appreciate me just because I know I was a part of something special, and I know it’s only gonna grow from here.”