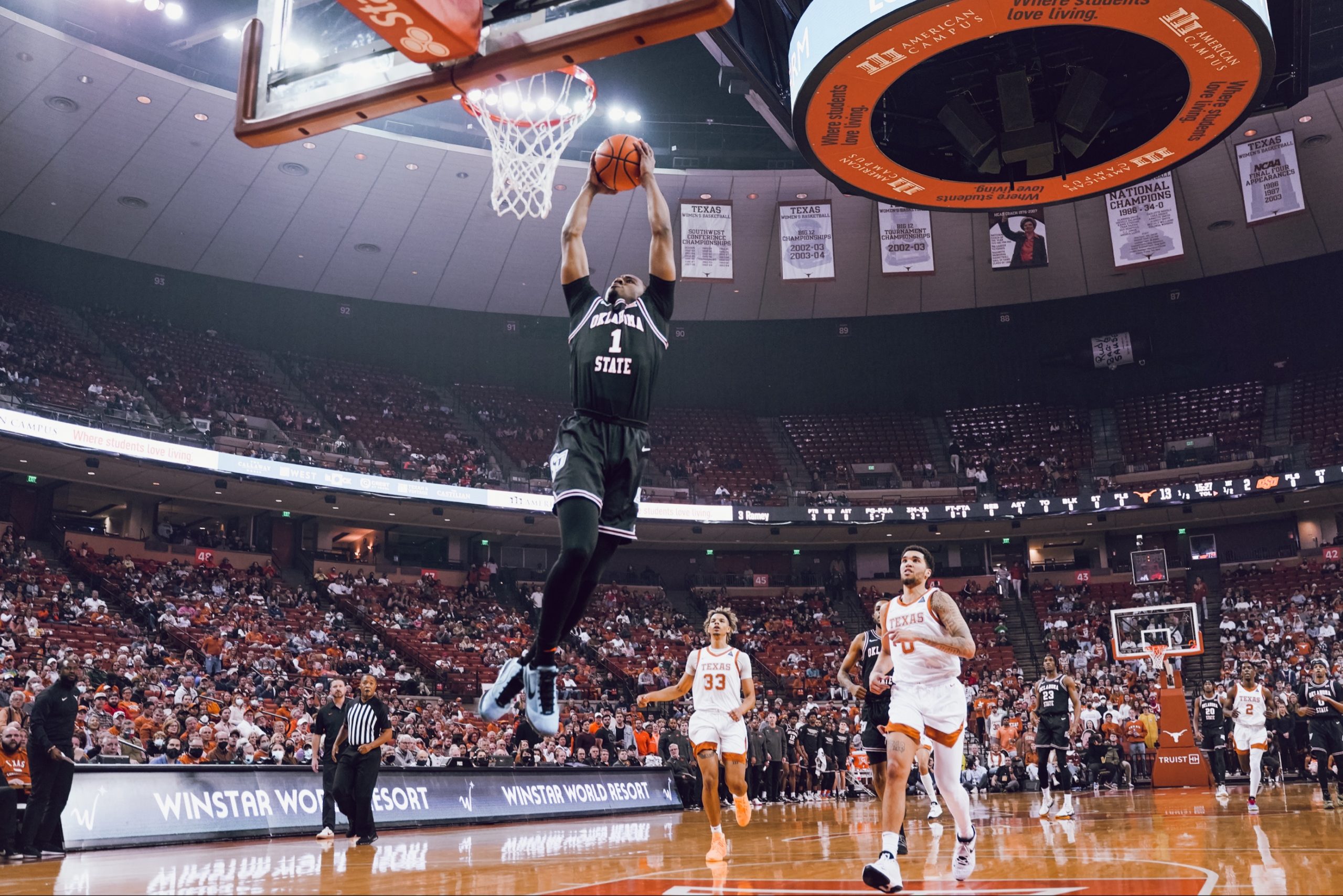 The Cowboys were brought back to earth a little bit after a good stretch of form.

Cowboys not named Bryce Thompson (who we’ll get to) were just 4-for-16 on second-half field-goal attempts Saturday.

It’s been a season full of questionable offense (to put it kindly) for the Cowboys, but Saturday’s game tied a season low in scoring output for the Pokes, joining the OSU’s 60-51 loss to Wichita State on Dec. 1. It certainly didn’t help that the Cowboys were without Bryce Williams, who averages 10.6 points per game. Williams is out with an ankle injury he suffered against TCU.

The Cowboys haven’t been good from 3-point range this season, and they all but abandoned the 3-point shot Saturday, heavying up nine 3s to Texas’ 21. OSU was also 7-for-12 (58%) from the foul line. Aside from Thompson’s 20 points, OSU’s other starters combined for 13 points on 18 shots. The five players who came off Boynton’s bench scored 18 points on 20 shots.

You run out of ways in writing about offensive struggles.

But the Cowboys’ defense remains elite.

The Cowboys’ D actually held the Longhorns to a lower field-goal percentage, as UT shot 36.7% to OSU’s 37.5%. Texas was just able to win the game at the foul line. OSU also forced Texas into 20 turnovers, which led to 21 OSU points.

Boynton used more 2-3 zone Saturday than he has used all season to this point, and even when the Cowboys weren’t forcing turnovers they were deflecting passes and stalling the Longhorns around the perimeter. It just wasn’t enough to carry the offensive struggles.

It’s a wonder what OSU’s offense would look like had Bryce Thompson not transferred to Oklahoma State this offseason.

Thompson scored a career-high 20 points Saturday, 13 of which came in the second half. He was the only Cowboy to hit a 3, going 2-for-5 from deep.

Toward the end of the game, Thompson was somewhat successfully playing hero ball, putting his head down and getting to his spots before pulling up and hitting his cool jumper. Thompson scored nine of the Cowboys’ final 12 points.

After averaging 8.5 points a game in the Cowboys’ nonconference schedule, he averages 12 points a game in Big 12 play and 16 points a game over his past four outings. While the Cowboys have stunk offensively like a porta potty on the third night of Calf Fry, there is some potential there with what Thompson is doing. Now it’s just a matter of fitting other guys around it.

Kalib Boone played 11 minutes Saturday, the second-most he has played in a Big 12 game this season.

Moussa Cisse was in and out of foul trouble, so that might’ve been what led to Boone’s minutes increase, but he did some good things in his time on the floor. He scored six points on five shots to go with six rebounds, two blocks and a steal. He was also +8 in plus/minus, tied with Rondel Walker for a team high.

Although Walker didn’t score as much as he did against TCU, he made some solid hustle plays to follow-up his game-winning performance against the Horned Frogs.

Walker scored only two points Saturday, but nearly everyone struggled offensively. However, Walker did have a career-high six steals to go with five rebounds and three assists. He was a big part of the Longhorns not scoring for 10 minutes of game time.