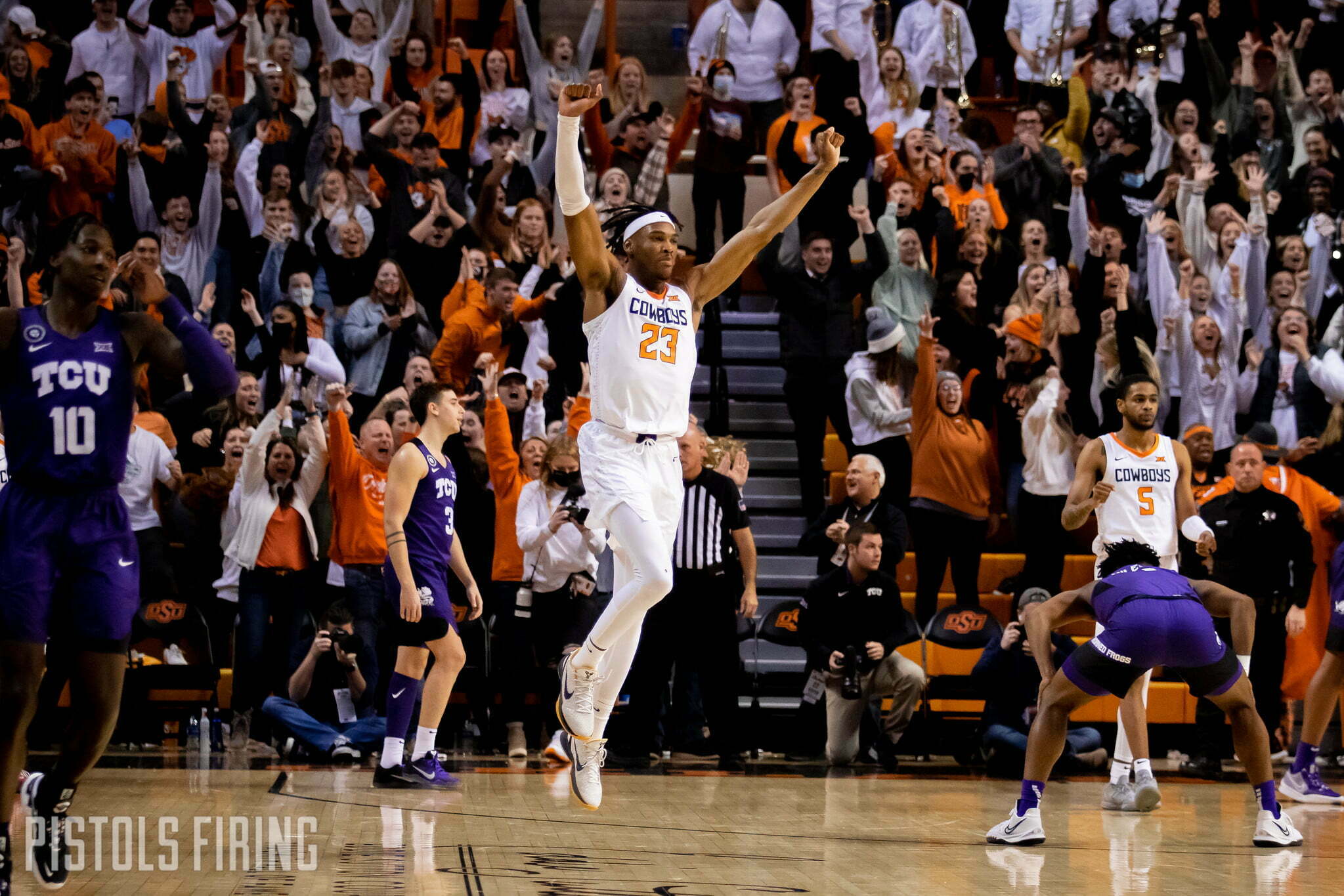 STILLWATER — The Cowboys certainly have a flair for the dramatics, regardless of sport.

Oklahoma State defeated TCU 57-56 on Wednesday night in Gallagher-Iba Arena after the Cowboys overcame a six-point deficit with 1:33 to play. Here are five thoughts on the game.

Rondel Walker had one contact lens in during his game-winning stretch.

Walker got hit in the face in the first half and lost his right contact. In the second half, with one good eye, Walker scored all 12 of his points and was a perfect 4-for-4 from the field, 2-for-2 from 3 and hit a pair of game-winning foul shots.

The Cowboys trailed 56-52 with 1:18 to play after a pair of Tyreek Smith free throws. Keylan Boone missed a 3-point attempt with 38 seconds to play, but Boone was able to get his own miss and kick it to Walker, who hit his 3, making it 56-55.

The Cowboys nearly forced a turnover as the Horned Frogs tried to advance the ball past half court. Avery Anderson knocked the ball away from a TCU guard and the ball bounced off Walker’s face. A scrum ensued that resulted in TCU having a fast break. Tyreek Smith blocked a Jakobe Coles’ layup attempt. Walker got the rebound and drew a blocking foul at the other end.

After a timeout forced Walker to think about his upcoming foul shots for an extra 30 seconds, he coolly hit both to give the Pokes the win — with one eye.

Despite the success, Walker said after the game he intends on playing with both contact lenses moving forward.

The Horned Frogs and Cowboys entered Wednesday’s game as the two lowest-scoring teams in Big 12 play, each averaging 61 points per conference game.

At halftime, it seemed as if the first team to 45 might win. It didn’t finish far off that.

TCU, meanwhile, had four shot-clock violations. The Cowboys forced TCU into 22 turnovers, but a lot of them were dead-ball turnovers, meaning the Horned Frogs could get set up on defense and thwart the Cowboys’ running opportunities.

It was a scrappy game, speaking kindly.

Tyreek Smith’s final stat line of two points, seven rebounds, two blocks and a steal won’t necessarily jump off the page, but there was a reason he was on the floor in crunch time over Moussa Cisse and Kalib Boone.

In the final 1:18, Smith had a defensive rebound, made two free throws, an offensive rebound and a block. Walker will rightly get the shine of the victory, but it probably doesn’t happen without Smith’s grunt work.

“… The one thing you admire about Tyreek is it doesn’t matter if it’s the last four minutes, the first four minutes, if he’s only played four minutes or if he’s played 34 minutes, you’re getting the same effort. You’re getting the same focus on winning plays. He’s gonna screen for his guys to get open. I’m so thankful that he’s here because everybody needs guys like that on their team to really win at a high level, and he’s certainly made a great impact on our program so far.”

4. Free Throws Were Gross Until the End

The Cowboys shot 57% from the foul line, and that came after finishing the game 6-for-6.

Free throws were far from free Wednesday night, as before the final minute and a half, OSU was 6-for-17 (35%) from the stripe, and that’s including Bryce Thompson being 4-for-4. In fairness, the Horned Frogs weren’t shooting the lights out at 11-for-17 (65%), but don’t let the 6-for-6 stat at the end fool you, the charity stripe wasn’t kind to the Cowboys on Wednesday night.

TCU guard Mike Miles came into Wednesday’s game averaging 16.9 points a contest; he had only eight points against the Cowboys.

Miles didn’t score against the Cowboys until there was 10:09 to play and started the game 0-for-10. Boynton threw myriad guys at Miles. Bryce Williams, Avery Anderson, Isaac Likekele, Rondel Walker, Keylan Boone and Bryce Thompson all guarded him at some point. Miles finished shooting 13% from the field. It was a good opportunity for the Pokes to flex their guard depth.

“Everybody guarded him,” Boynton said. “Rondel guarded him, [Bryce Thompson] guarded him some, I think Keylan got switched on him a couple times. Length and just giving him different looks. He’s a really smart player. Trying to keep a guy like that off balance requires maybe switching ball screens, sometimes trapping it, sometimes going under, so that he doesn’t get a steady diet. If he can figure out how you’re guarding him one way, then he’ll beat you.”