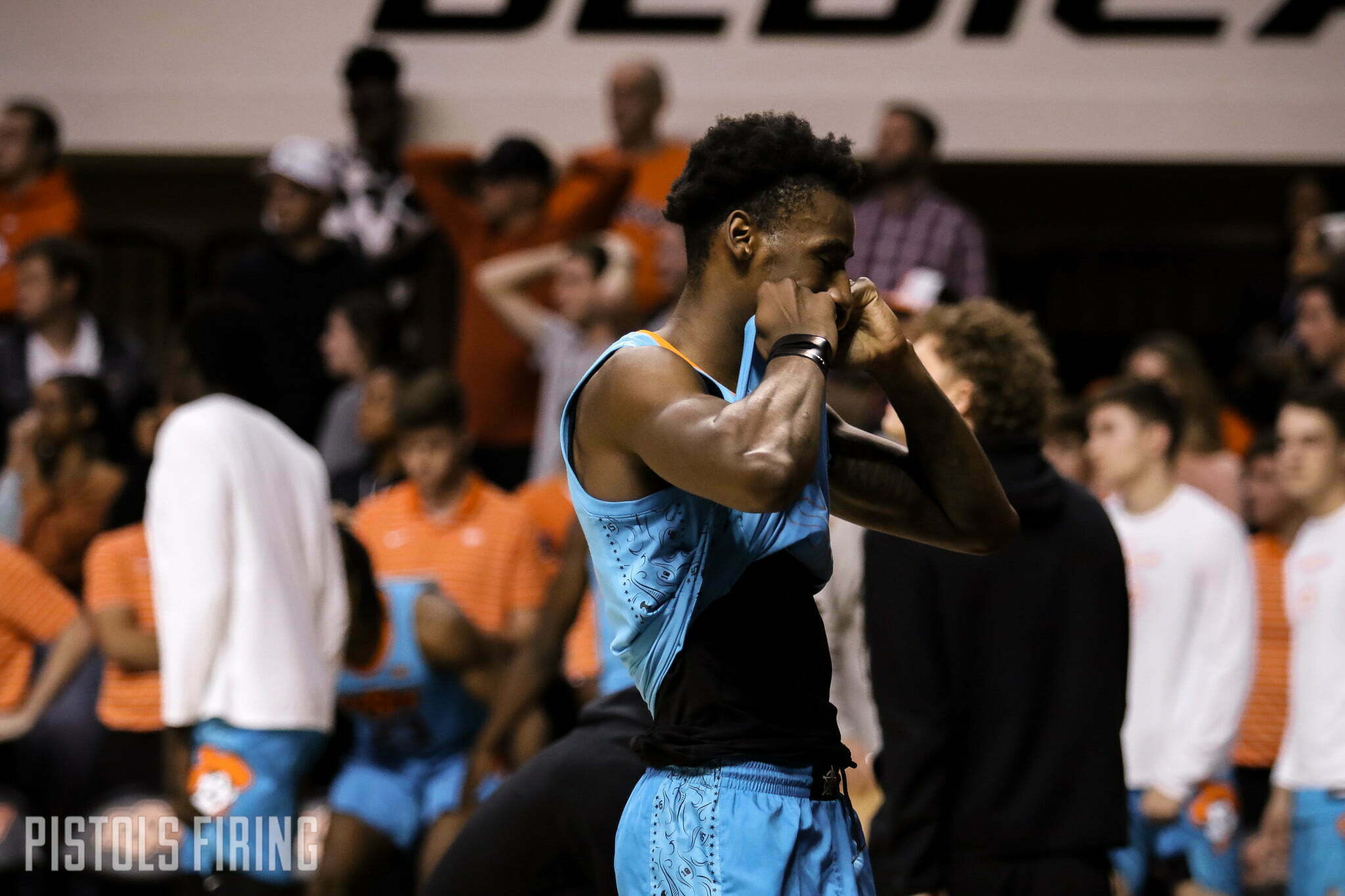 STILLWATER — Shades of Oakland last season or Charlotte a few seasons back, the Cowboys crumbled to a mid-major.

Oklahoma State fell to Southern Illinois 61-60 on Thursday night in Gallagher-Iba Arena. The Cowboys held a 13-point lead with about 16 minutes to play and led by 10 with 6:43 to play before things crumbled.

It came down to free-throw shooting. The Cowboys played well defensively, holding a team that shot 43% from 3 on Monday to 29%, but the Cowboys were just 50% from the foul line, missing three in the final minute.

Trailing 59-51 with four minutes to play, the Salukis ripped off a quick 7-0 run where the Cowboys were 0-for-5 from the field. Moussa Cisse split a pair of free throws with 52 seconds to play to put OSU up 60-58 before Marcus Domask hit a 3 in the corner with 22 seconds left to give SIU a lead.

The Cowboys had a turnover and were forced to foul. SIU missed the front end of a 1-and-1, but Bryce Thompson’s buzzer-beating attempt rimmed out.

A team’s shooting ability is usually fairly evident by its free-throw percentage. Mike Boynton shoots for a 75% average at the line — the Cowboys shot 50% Thursday.

Bryce Thompson shot the Cowboys’ first six free throws, but he made only one. From there, OSU’s newcomers (Caleb Asberry and John-Michael Wright) went 6-for-6 from the line before Moussa Cisse closed things out going 1-for-4 in the final minute.

“I don’t want to pretend like I’m some free-throw shooting expert, but I think we got good guys shooting,” Boynton said. “It’s been an issue for Moussa for most of his career. He’s getting better there. Bryce and him were the only ones that missed, so it really wasn’t a big team issue.

“Just gotta keep working at it. I’ve seen them make them in practice. We shoot them every day, and they’ve got to ultimately have confidence that they can step up there and make them when they count.”

So, when a team shoots 50% from the foul line, it should be no surprise when that team doesn’t shoot particularly well from 3. The Cowboys were 25% (4-for-16) from 3, which was actually better than the 24% they shot Monday.

After starting his OSU career 0-for-9 from 3 (including the exhibition), Caleb Asberry finally got the lid off the basket Thursday, going 3-for-6. However, Bryce Thompson, Avery Anderson, John-Michael Wright, Chris Harris and Kalib Boone were just 1-for-10.

It’s hard to win games in modern basketball if you can’t shoot the 3, and after two games, it doesn’t look like the Cowboys are much better in that area this season.

What does OSU win for blowing a 13-point lead on its home floor? A trip to Oakland (in Michigan, not California), a team that beat the Cowboys last season.

Oakland runs a unique 2-3 zone that gave the Cowboys fits in their 56-55 loss last season. How do you beat a zone? Hit shots, particularly 3s. The Cowboys were 3-for-17 (18%) against the Grizzlies last season.

The Grizzlies started the year with a 92-27 win over Defiance (a Division-III school in Ohio). They play Bowling Green on Friday, so maybe we’ll know a little more about them then.

A lot of times last season, Avery Anderson was the Cowboys’ go-to guy if they needed a bucket late, with Boynton crediting his clear-mindedness as the reason for it. Thursday saw Thompson take the final heave after he ripped down a rebound with time dwindling away.

He pulled up a mid-range jumper from the right elbow, a shot he has hit (and will hit again) plenty of times, but this one rimmed out.

“It wasn’t necessarily a play design,” Boynton said. “We were just trying to get down the court and execute something pretty quick. He got the rebound and went. As far as I can remember, the clock was just running down and, broken floor, you got the ball in the hands of a really good player, you just gotta let him make a decision in that situation.”

Free throws aside (if you can put those aside), Moussa Cisse was dominant Thursday, recording his first double-double of the season.

After having only five rebounds Monday, he pulled down his 10th with 17 minutes to play Thursday, finishing with 15 to go with 11 points. Through two games this season, Cisse is now averaging eight points and 10 rebounds a game — and his stat line Thursday doesn’t seem like an outlier.

“Tonight, He was very, very aggressive and assertive,” Boynton said. “The free-throw thing, it’ll get there for him. I thought it was very effective. He played a very good game. The free throws are something we just have to continue to build his confidence in, but I think he’s the type of player that could be a consistent threat in there.”

Boynton addressed (or tried to address) 3-point shooting by bringing in Wright and Asberry, and Cisse and Thompson having another year in the system only seemed like a positive. So, was this loss a classic college upset? Or is this indicative of how this team actually is? I guess only time will tell, but pondering that two games into the season is not where I thought the Pokes would be.

“We play a long season,” Boynton said. “So, there’s a lot out there for this team to still accomplish. So, a few things can happen, though. They could start to point the finger, which you certainly hope wouldn’t happen this early. You’d hope we start looking internally and try to figure out ways to help each other more. But certainly, there’s an opportunity here for us to get better. We’ve got several games left for us to get better and learn. This could be one of those moments that’s a critical point for us moving forward.”