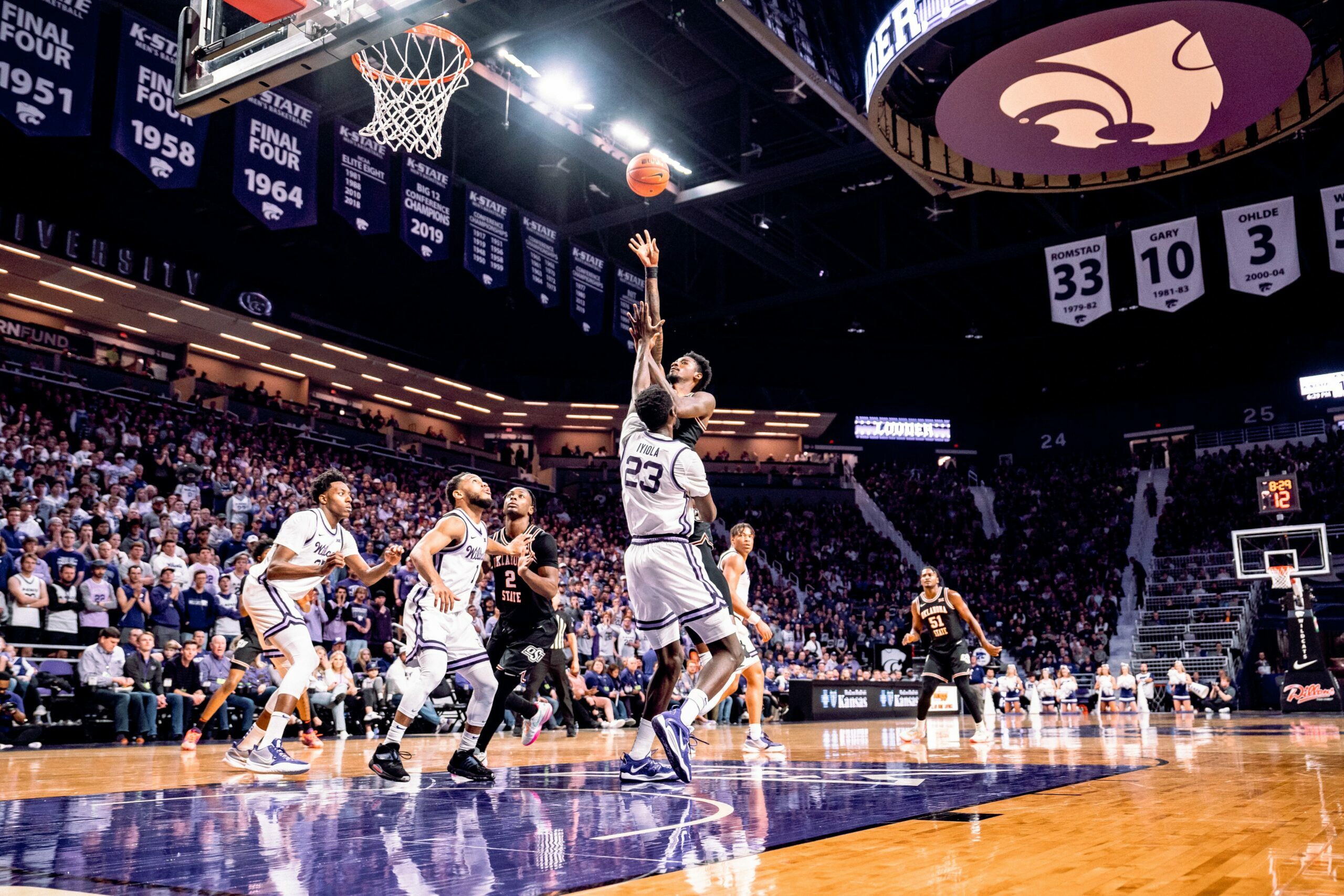 Oklahoma State fell to Kansas State 65-57 on Tuesday in the Little Apple. Here are five thoughts from the game.

The Cowboys had another long stretch without scoring, and it again proved costly.

At the start of the second half, OSU had a stretch of 5:48 where the Pokes went scoreless. It was part of a much larger 21-9 K-State run to start the second half that built a 10-point Wildcat lead.

During that scoreless stretch of 5:48, the Cowboys missed 10 shots and had four turnovers. What’s perhaps more amazing was even when the Cowboys went 5:48 without putting the ball in the basket, they were down only two points just a few seconds later.

If it makes anyone feel any better, K-State — a team that averaged 79.7 points a game coming into Tuesday — also had a long scoring drought. The Wildcats went on a 5:07 drought midway through the second half, as OSU pulled to within a bucket, but the Cowboys scored just once in the final 3:52 to end it.

Boynton has been after consistency from Kalib Boone, and Boone has answered the call with a third straight game in double figures.

Boone put up a career-high 23 points on Tuesday, shooting 9-for-15 from the field. He was consistent the whole way through, scoring 12 points in the first half and 11 in the second. As OSU looks for more answers on the offensive end (like Caleb Asberry’s 15 points Tuesday), Boone has provided what he can. If he can consistently pour in 15 to 25 points, it’ll set the Cowboys up for success. They just couldn’t get enough outside of Boone on Tuesday night.

Even when he wasn’t scoring late, Boone was making plays. With the defense sucked into him on an entry pass, he coolly flicked a ball out to Chris Harris for 3 that pulled OSU within 56-55.

He played a season-low 12 minutes Tuesday, going scoreless with two rebounds, three assists and a pair of turnovers. OSU coach Mike Boynton said Anderson isn’t 100% after he fell on his wrist on Saturday. After Anderson tried to play through the injury, Boynton shut him down after playing only four minutes in the second half.

“He obviously clearly didn’t have it,” Boynton said. “All the bobbled balls, probably makes sense now. He really just couldn’t get his handle right, which he’s usually pretty good at, and that’s what it is. We got to get him healthy and obviously when we do that, that’ll add another element to our team.”

As a whole, the Cowboys didn’t get a ton from their starting guards Tuesday. That group of three (Anderson, Bryce Thompson and John-Michael Wright) combined for eight points and went 3-for-25 from the field. OSU doesn’t need them all going at once (though, that would be nice), but that isn’t going to cut it.

Moussa Cisse missed a second straight game, and it’s hard to not wonder whether OSU would’ve been able to pull out wins in either had he been healthy.

Still nurturing an ankle injury he suffered against West Virginia last week, Cisse was suited up but didn’t participate in the Cowboys’ pregame warmups. He has been active on the bench and in huddles trying to cheer on his squad, but the 7-foot-1, 216-pound athletic anomaly is still absent.

“Just not quite ready yet,” Boynton said. “Tried to get in a little bit yesterday in practice — still not able to jump. A lot of his game is — he’s not like a finesse skill player that’s out there shooting jump shots. He needs his athleticism, and right now he can’t explode off his ankle and feel comfortable landing to go there and really give us all he has.

5. The Cowboys Are Close, but How Much Longer Can They Afford to Be Close?

In the Cowboys’ three Big 12 losses (against the No. 4, No. 6 and No. 11 teams, respectively), they’ve been within a basket in the final four minutes of each game.

The Cowboys are right there — or as Lincoln Riley would say, “So close” — but the finish just hasn’t been there. Would Cisse have made a difference in the past two? Impossible to say for sure, but one would think. Just like Spencer Sanders probably would’ve made a difference against Kansas, West Virginia and Wisconsin. Finishing seems to be a bugaboo that has followed OSU this school year.

“It ends up being an eight-point game, but anybody who watches basketball knows this is a one-possession game right there when it’s really time for it to be decided,” Boynton said. “At the end of the day, we just gotta make plays better. We got a couple good looks there that didn’t go down, and obviously we gotta make sure we value those possessions as much as possible.

“… There’s a lot of growth with this group. It’s continued to be evident that these kids are competing as hard as they can in the toughest league in the country. I’m confident if we don’t get dejected by the results and we stick to the process of hard work and preparation it takes to win, then eventually we’ll break through.”