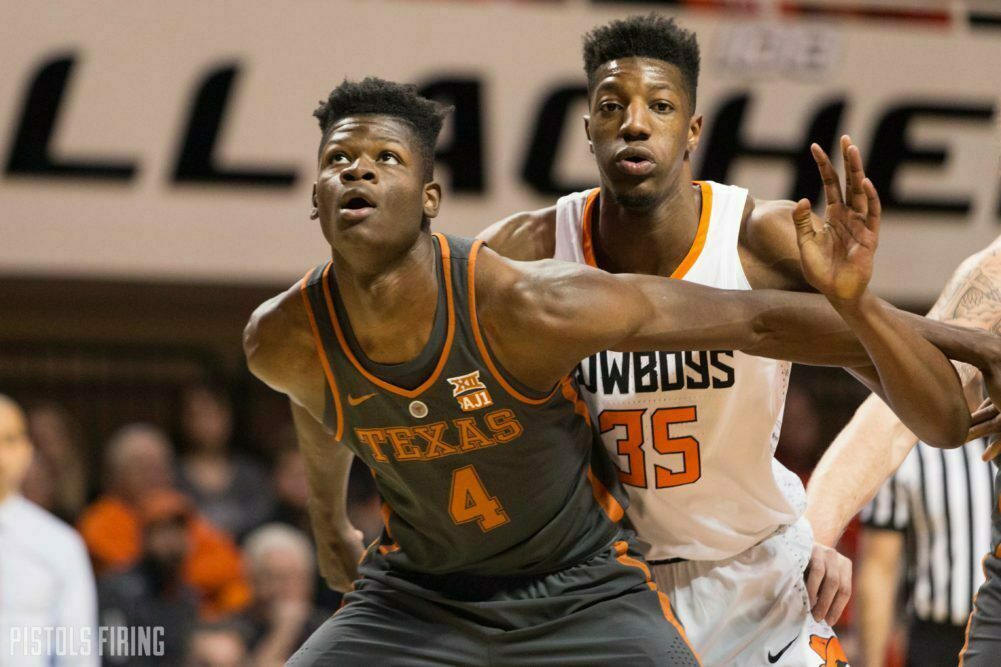 Somebody in our Slack chat (whose identity will be protected) queried at halftime where Oklahoma State’s next win was going to come from. To be fair, I was feeling the same feelings. The Cowboys looked outmatched against a stretchy Texas team and were coming off a bad loss at Kansas State.

And then things got worse.

Jeffrey Carroll led the way with 17 points and 3 rebounds while Brandon Averette and Lindy Waters both poured in double digits. Yankuba Sima had probably the best game of his career as a Poke as he had 7 points and 7 boards and contributed to the game-winning tip-in by getting a board over 8’5″ Mo Bamba.

Five thoughts on a wild one in Stillwater.

OSU has had big bodies in the last few years. Mitchell Solomon is a big body. And he does his job well. But there’s a difference between being a big body and a legitimate lengthy center who can protect the rim and roll with Big 12 giants like Mo Bamba.

Sima offers that. OSU can work inside out on offense and throw somebody on the front line who can change the game at least a little bit on both ends. Guess who isn’t getting that rebound over Bamba with 10 seconds left? How about “anyone else wearing orange, black and white.”

Is he the most skilled big in the country? No. You saw him try and take Bamba on with a few minutes left under the rim (?). But to compete in this league, Yankuba Simas are a necessity, and OSU needs to start collecting more of them.

2. Carroll had to be great

Clip had to unload coming home, and he did. I thought he was brilliant late. He finished 7-of-12 from the field and 2-of-5 from 3-point range and stayed within himself. As OSU started getting stops on defense (more on that in a minute), Carroll felt the pace of the game quicken and he asserted himself. He had 12 of his 17 points in the last third of the game, when Mike Boynton needed him most, and he got a great look on the final drive.

One of the biggest issues with OSU on offense is that it seems like so often Carroll has to create his own offense. He did late on Saturday, which opened up the floor for guys like Brandon Averette and Tavarius Shine. Carroll has to be the lightning rod for the Pokes in the same way Trae Young is for OU or Jevon Carter is for West Virginia. It took a while against the Horns, but maybe this was a jump-start that will get him playing on an All-Big 12 level once again.

In the last 5:55, Texas was 1-of-8 from the field with a pair of turnovers and a missed free throw. OSU played the kind of lock-down defense Boynton dreams of and Eddie probably even tossed a pair of those “defense | discipline” shorts into the locker room after the game.

OSU won because they defended down the stretch, not because they closed offensively. That wouldn’t have meant anything had they not gotten nine stops on Texas’ final 10 possessions.

Big story tonight is points off turnovers, especially late. Pokes had 19 for the game to UT’s 4 #okstate

The apex of it all was Waters taking a massive charge with Texas poised to make it a 3-point game.

Waters takes a late charge against Texas with #okstate down 1. pic.twitter.com/ZQrmFz8l6c

Averette on Lindy's late charge: "He really saved me because I got blown by."

OSU turned Texas over 15 times overall and took away the extra possessions created by Texas’ ability to hit the offensive glass.

Averette started on Saturday over Kendall Smith, which was telling. What was more telling was that he also finished. In the last five minutes, he had four points, a rebound and a steal and controlled the offense well. I might be overreacting, but is it time to start talking about him as OSU’s best option at point guard?

Don’t get me wrong, I’d rather my kids run laps around our island in ghillie suits laced with scissors than watch Averette shoot anything over a 10-footer. But that final five of Averrette, Carroll, Shine, Waters and Sima was tasty.

Also, this might be a coincidence, but OSU took just 10 3-pointers on Saturday, which is (by far) the fewest they’ve taken all year. Smith has a tendency to shoot from deep whereas Averette’s propensity is to attack the rim. Maybe Boynton preached fewer 3s (OSU has been on an all-time pace for 3-point attempts so far) or maybe they just assumed the attitude and identity of Averette. Either way, I think it probably benefits them for the only guys pulling from deep to be Carroll, Shine and Dizzy.

I was curious about how OSU would come out on Saturday after Boynton called them “gutless” following Wednesday’s loss in Manhattan. It was touch and go for the first 35 minutes (mostly because there’s just not as much offense as you’d like), but I thought OSU did a great job of keeping the game fairly slow and picking its spots against a prickly Texas defense.

Then they closed like they cared. Carroll was throwing punches into the air that would have raised an Young Mike Tyson eyebrow. Sima was jacked up. The bench was bonkers. It was actually … fun!

What a game! #LetsWork pic.twitter.com/K20HVtYsEp

OSU’s win was one of three 1-point games in the Big 12 on Saturday (and TCU-OU went to overtime), which again points to the absurdity of this conference. The Pokes go to Waco on Monday before getting the Trae Young Show next Saturday in GIA with the students back in town.

A win against Baylor would be monstrous and maybe provide OSU with the continuous momentum it would need to take down OU in what would be a huge bullet point on the NCAA Tournament resume.