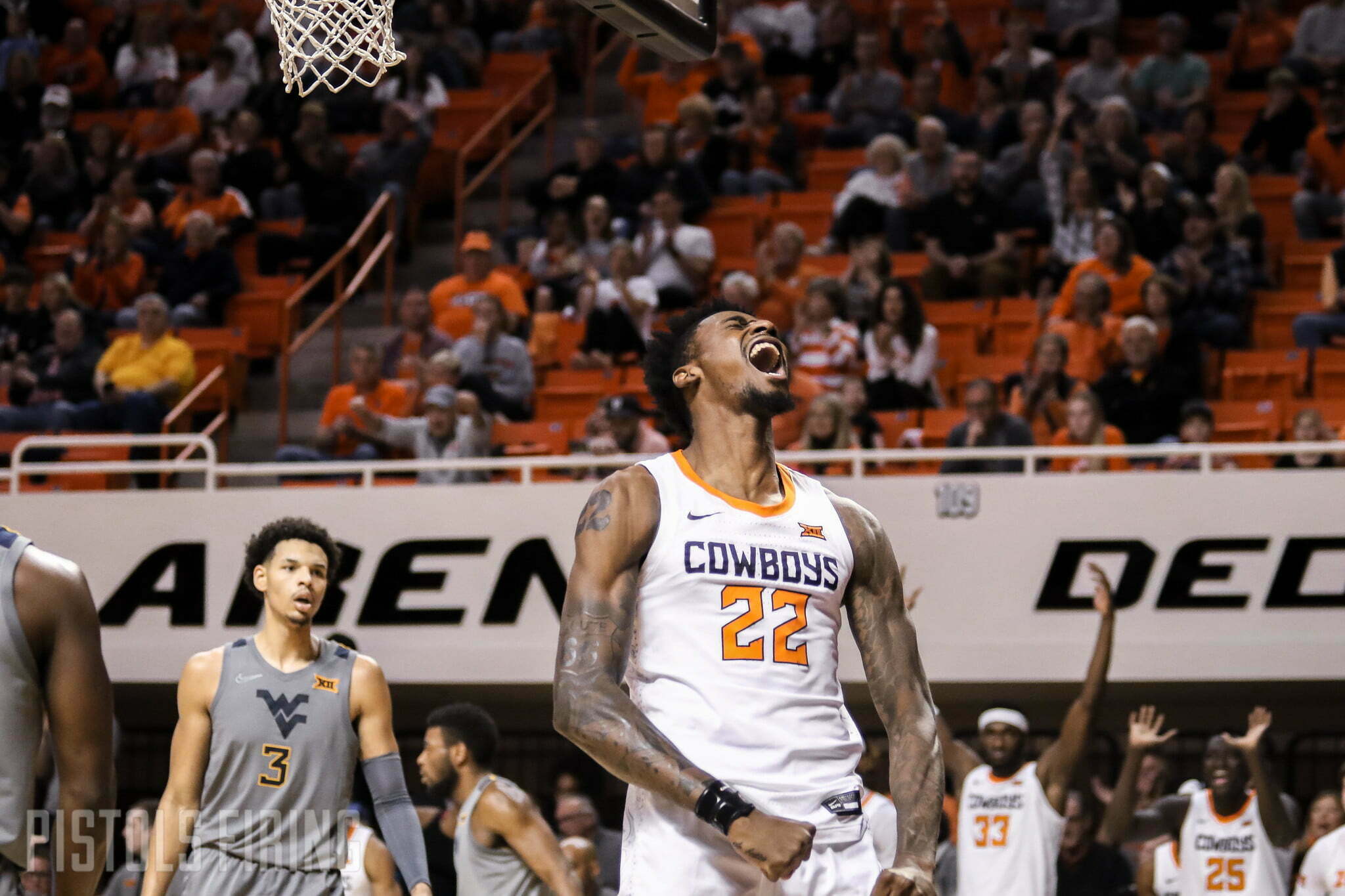 STILLWATER — The Cowboys let another double-digit lead slip on Big Monday, but they were able to rebound and get a tally in the Big 12 win column.

1. Kalib Boone Big Down the Stretch

Kalib Boone didn’t have a particularly great game in Lawrence, and he was shutdown in the first half Monday. But when the Pokes needed him down the stretch, he showed up.

Boone scored all 10 of his points in the second half. In the final five minutes alone, Boone had six points and three rebounds.

The game was a physical battle — 46 personal fouls were called and 45 free throws were shot — and a bit of physicality seemed to get Boone going. In the second half, he got into a tie up that spilled onto Eddie Sutton Court. He popped up and went away hyping up the GIA crowd.

“KB, it’s been an interesting study,” OSU coach Mike Boynton said. “Ton of potential, but just the inconsistency. It’s what we’ve always talked about. I don’t know sometimes if he doesn’t believe in himself enough to go out out and play with the type of confidence that he showed in the second half today, but I’ve been trying to get him to understand that if we’re gonna get where we want to go, we’re gonna need the best version of him.”

Moussa Cisse was a big part of that physical battle early on, banging in the low post with 6-foot-10, 285-pound Jimmy Bell. But after scoring his third bucket in the first half, Cisse had a spill on the other side of the floor and needed some help back to the bench.

From there Cisse went back to the locker room before returning to the bench. He played three minutes in the second half, but clearly wasn’t his normal self. Here is what Boynton said after the game.

“Obviously you saw we put him back in there, so I just don’t know if it’s stiff, if it swelled,” Boynton said. “He felt good enough to give us something, but we’ll have probably a better report as we go through the week.”

Bernard Kouma didn’t play a ton Monday, and he came into Monday’s game having played only 6:44 all season. But with OSU needing bodies to throw at the gargantuan Bell, Kouma got his number called and played a roll.

In only two minutes on the floor, Kouma didn’t record a stat, but he walled up a Mountaineer on defense before drawing a charge later in that possession. Not only did the sequence give OSU a stop, it gave the Cowboys and GIA a spark.

“I’m not sure in the last three years there’s been a scholarship player that’s played less real significant minutes than he has,” Boynton said. “And not one time has he ever complained. He comes to practice every day with a great attitude. He’s dependable. Then obviously when we needed him tonight, he stepped up and gave us three really, really good minutes. Obviously he didn’t win the game, but he certainly made sure that we held the line for a little while.”

The NBA’s reigning Defensive Player of the Year, Marcus Smart was on-hand to watch his alma mater’s Big 12 home opener.

Smart’s Boston Celtics play in Oklahoma City on Tuesday night (after playing in Denver on Sunday). It’s awesome that Smart finds his way back to Stillwater when he can — no matter the fact that the coach he played for nor the athletic director he played under are gone.

“I’m just fortunate to be the coach here, but this isn’t my program — this is his,” Boynton said. “This is his program. It’s Keiton Page’s program. It’s Scott Sutton’s program. The guys in the locker room, it’s their program. For them to feel that connection to it long after they’ve been gone, it shows that they feel like they were treated well while they were here. It’s always important that they come back and we show them the type of respect that we try to every time.”

5. The Pokes Are on the Board

After nearly starting Big 12 play as good as a team can (with a win in Lawrence), the Cowboys were able to put Saturday’s disappointments behind them quickly and get a good win on the ole resume.

This started making the rounds this weekend, but entering the week, the 10 Big 12 teams had the 10 toughest remaining schedules in all of college basketball. It’s comical.

So any win in this stretch of 18 games is a good one, and if you win enough — no matter how the nonconference went — you’ll be in a good spot come dancing time.