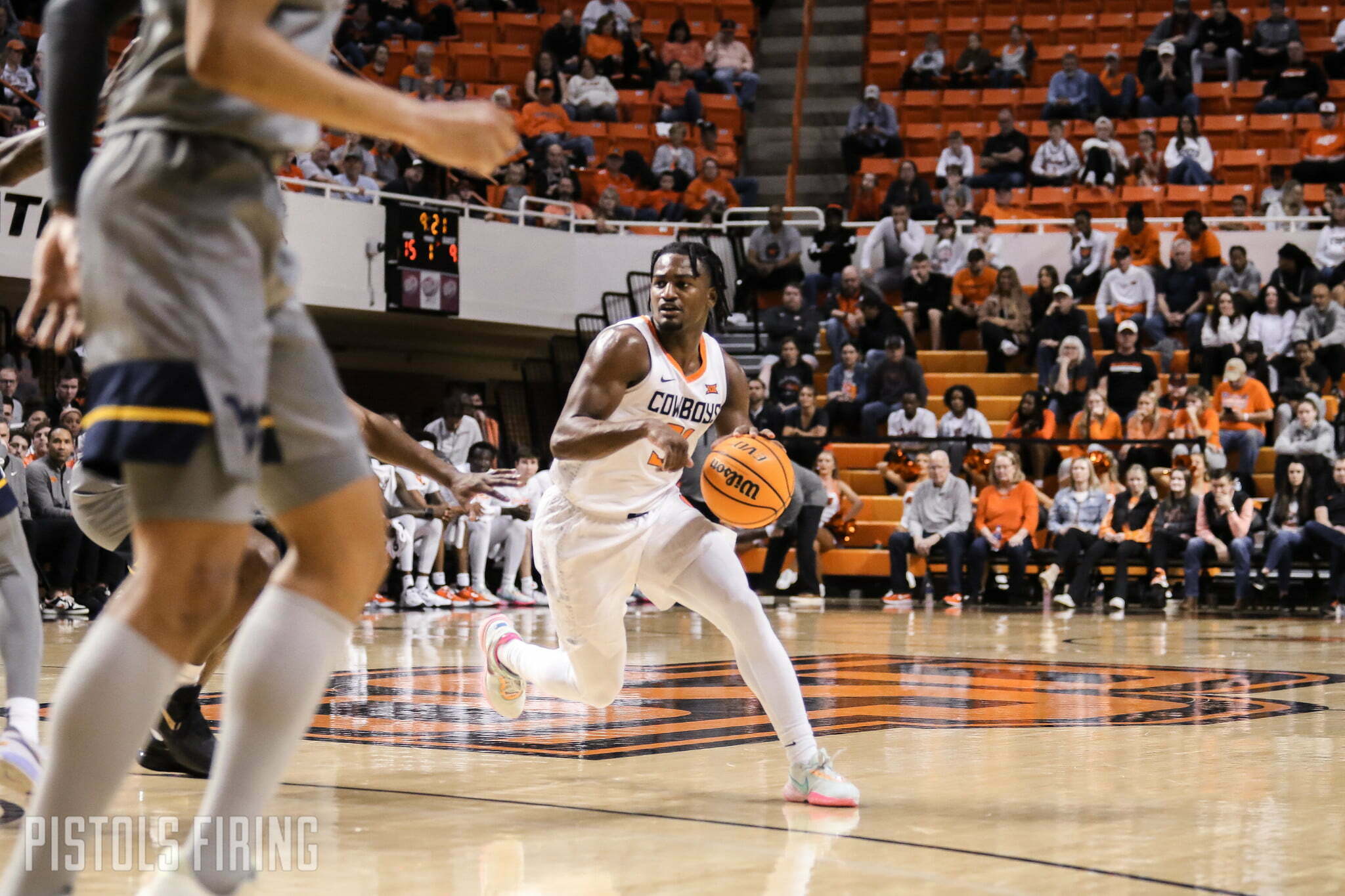 It wasn’t always pretty, but it was as pretty as it needed to be.

Oklahoma State defeated West Virginia 67-60 on Monday in Gallagher-Iba Arena. The Cowboys led for almost 35 minutes of regulation, held the Mountaineers to a season-low in scoring and shooting, and were able to avoid too much drama in the final moments of the game.

With the reigning NBA Defensive Player of the Year on hand, the Cowboys were channeling their inner Marcus Smart.

John-Michael Wright led the Cowboys in the first half with 10 points on 4-of-5 shooting, including both of his 3-point attempts. He finished with 11 and a team-high four assists.

Mouse Cisse got off to another nice start, making three of his first four attempts — including this alley-oop below — but then he suffered an ugly ankle roll on the next trip down the court. He didn’t return until midway through the second half when he entered the game momentarily and was obviously hampered. He played only 11 minutes.

The Cowboys held a nine-point lead at the half and built it to as high as 13 before the Mountaineers mounted their comeback.

West Virginia used a 10-2 run in the second half to get within striking distance, and they did it from the charity stripe. The Mountaineers dropped their Big 12 opener to Kansas State in overtime, coughing up a big lead by shooting an abysmal 20-of-38 from the foul line. On Monday in Stillwater, they seemed like they were ready to turn that around, but regressed to a 61-percentage finish on free throws — including a pair of big misses down the stretch — while shooting 11 more free ones than the Cowboys.

After trailing for the first 30:50 of the game, West Virginia got a shot in the arm from Erik Stevenson. The Cowboys had weathered a couple of WVU runs and kept the Mountaineers at an arm’s length for the first 11-plus minutes of the second half before the polarizing transfer knocked down three 3-pointers, in less than a minute and a half, to give WVU its first lead of the game.

But after that final deep ball, Stevenson apparently made an inappropriate gesture to the Loyal and True in the stands which landed him a technical foul, giving him his fourth personal. He got his fifth just a couple of minutes later and was disqualified. Stevenson still finished with a game-high 17 points on 7-of-12 shooting. With Stevenson on the pine, OSU outscored WVU 13-5 over the final six minutes of the game.

The Cowboys answered with their own 6-0 run to take the lead back before. Avery Anderson broke loose for a sideline layup to push the lead to 62-58 with less than two minutes left but immediately picked up his fifth foul. He finished with 13 points on 6-of-10 shooting and five rebounds.

Bryce Thompson led the Cowboys with 15 points (2-of-5 from 3), but Kalib Boone showed up huge in the second half with Cisse sidelined. Boone went 5-of-6, scoring all 10 of his points after intermission. He also tied for a team-high with six rebounds.

Next up, the Cowboys host the Longhorns on Saturday at 11 a.m.