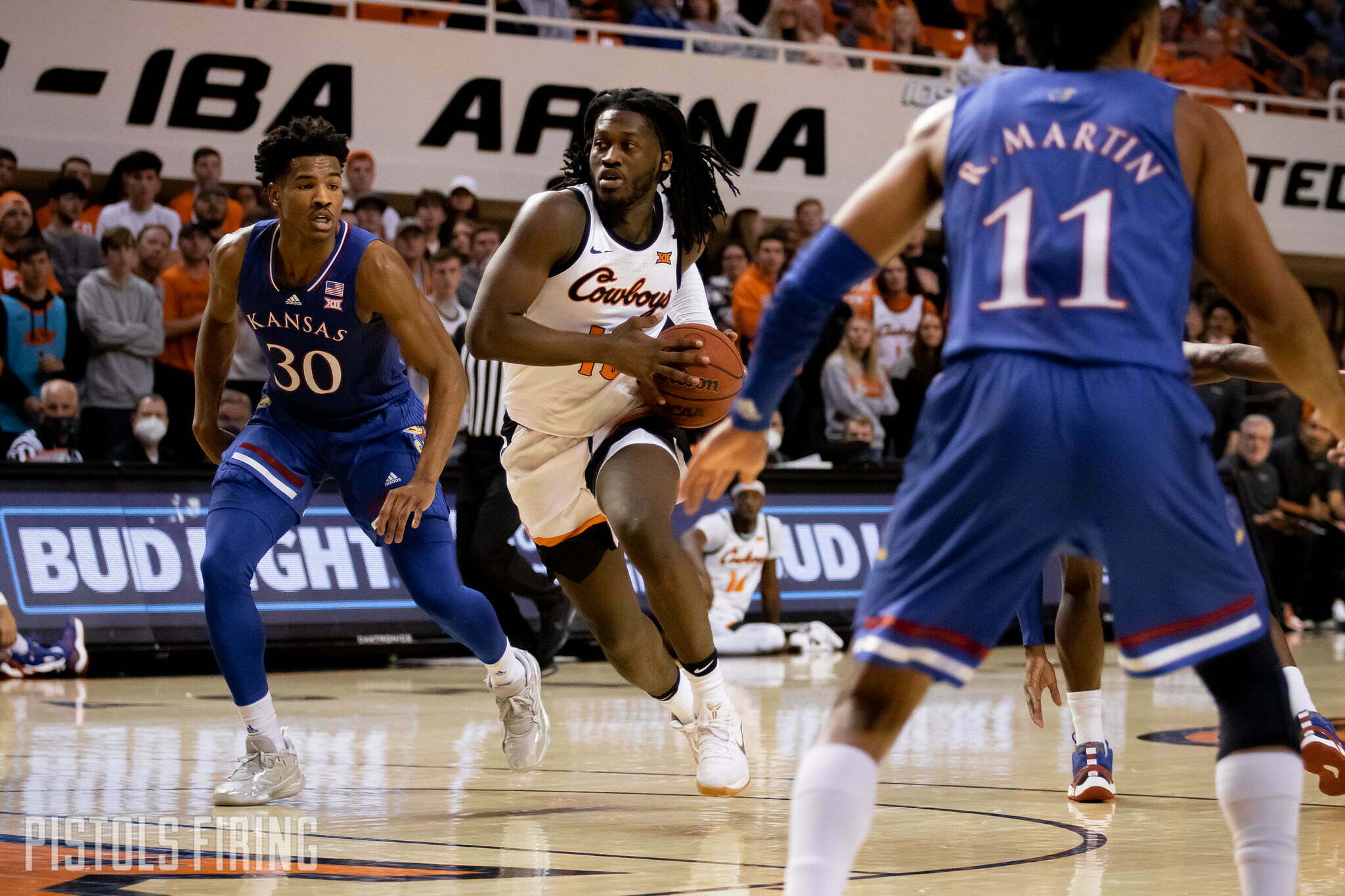 STILLWATER — After a 17-day layoff, the Cowboys welcomed perennial power Kansas to town, and the Cowboys got off to a slow start on their goal of winning the Big 12’s regular season title.

Oklahoma State fell to Kansas 74-63 on Tuesday night in Gallagher-Iba Arena. Here are five thoughts from the game.

The Cowboys played quite poorly defensively at the start of this game, so poorly that their 17-day break between games couldn’t even excuse it. … But then they showed some fight.

After the Jayhawks started the game 6-for-8 from the field, the Pokes forced KU into six straight misses. The Cowboys closed the first half on a 14-0 run, forcing the Jayhawks to miss 20 straight shots.

In the end, the Jayhawks put the Pokes away like a team of Kansas’ caliber should have. Runs of 7-0 and 9-0 in Kansas’ favor in the second half were back-breakers for the Pokes. The Cowboys looked rather gassed with about five minutes to play before one more fit of life that came in the form of a 6-0 OSU run.

“I hope I’ve never given the impression I come in here to make excuses,” OSU coach Mike Boynton said. “They beat us. We had ourselves in position to win a Big 12 game on our home court, and we didn’t get the job done. Does the 17-day layoff have an effect? Maybe, but at the end of the day, it’s a six-point game with six minutes to go. We gotta make plays at that point.”

2. Kansas Has Some Dudes

At his Monday media availability Boynton called this Kansas team one of the best teams he has ever coached against, and he reiterated that after the game.

The Jayhawks have some dudes, and not some five-star true freshmen guys who are still figuring things out — some college basketball bonafide dudes.

Ochai Agbaji, a 6-foot-5 senior guard, looked as if he might not miss early. He finished with 16 points.

But the real star of KU’s show was 6-10 senior center David McCormack. McCormack came off the bench Tuesday night with Bill Self trying to motivate him, and motivate him Self did. McCormack finished with a game-high 17 points and 15 rebounds. Moussa Cisse, who we’ll get to, did a good job on him for the most part, but McCormack was still finding ways to score over Cisse’s 7-foot-6 wingspan.

After the Houston game, which feels like ages ago, I said I wanted to see a more aggressive Isaac Likekele. Well, that’s what I got.

Likekele put up 15 shots, which tied a career high. He also had his third career double-double, finishing with 16 points, 12 rebounds, three assists, three steals and a block.

He was attacking the basket and used his big frame to get where he wanted. For a team that has lacked an offensive identity to this point in the year, Likekele was a reliable form of offense that didn’t feel overly forced. OSU could recreate this.

“We had a long break off, and I told myself at New Years I just gotta be more aggressive for this team, honestly, just to put us in position to win games, especially playing in the Big 12,” Likekele said. “It’s my senior year, so it’s kind of like this is my last time, so I gotta be aggressive. Not every night is gonna be 15 attempts. That’s not me saying I’m just going to go out there and try to shoot every shot that I can get, but I have to look to make plays for this team.”

As a team, the Cowboys had a 17-day break, but Cisse hasn’t played since the Cleveland State game on Dec. 13.

He traveled back to his home country of Guinea after his aunt died and only recently got back to the United States. Despite having not played in 22 days, Cisse had his best game in a while and did so against stiff competition.

Cisse finished with eight points, eight rebounds and four blocks, and the Cowboys were +7 with Cisse on the floor. McCormack still went off, but for the first time in a while, it felt like OSU had guy who could go toe-to-toe with a physically imposing big.

5. The Only Crown Available

An 11-point loss to the No. 6 team in the country seems like a forgivable offense, but this team has talked throughout the preseason and nonconference slate about going after the only crown available to them — the regular season Big 12 title. So, all of these games mean a lot in that.

If OSU is going to win the regular season crown, that means Kansas isn’t, so the Cowboys have to find some way to get this win back. It was good the Pokes showed the fight they did, and under normal circumstances a loss to the No. 6 team in the country can be forgiven. But, if the goal is to win the Big 12 this is a team the Cowboys will have to do better than from here on out.

Is that possible? Portions of this game say yes, but being the top dog in the top conference in America is no easy feat. It’s a night-in, night-out thing. The Cowboys host No. 17 Texas on Saturday.

“It’s a short-memory league,” Boynton said. “If you get too caught up in trying to look too far down the road, you’ll find yourself in a real misery because the schedule never gets easier. So, we gotta focus on trying to get better when we come back to practice on Thursday.”