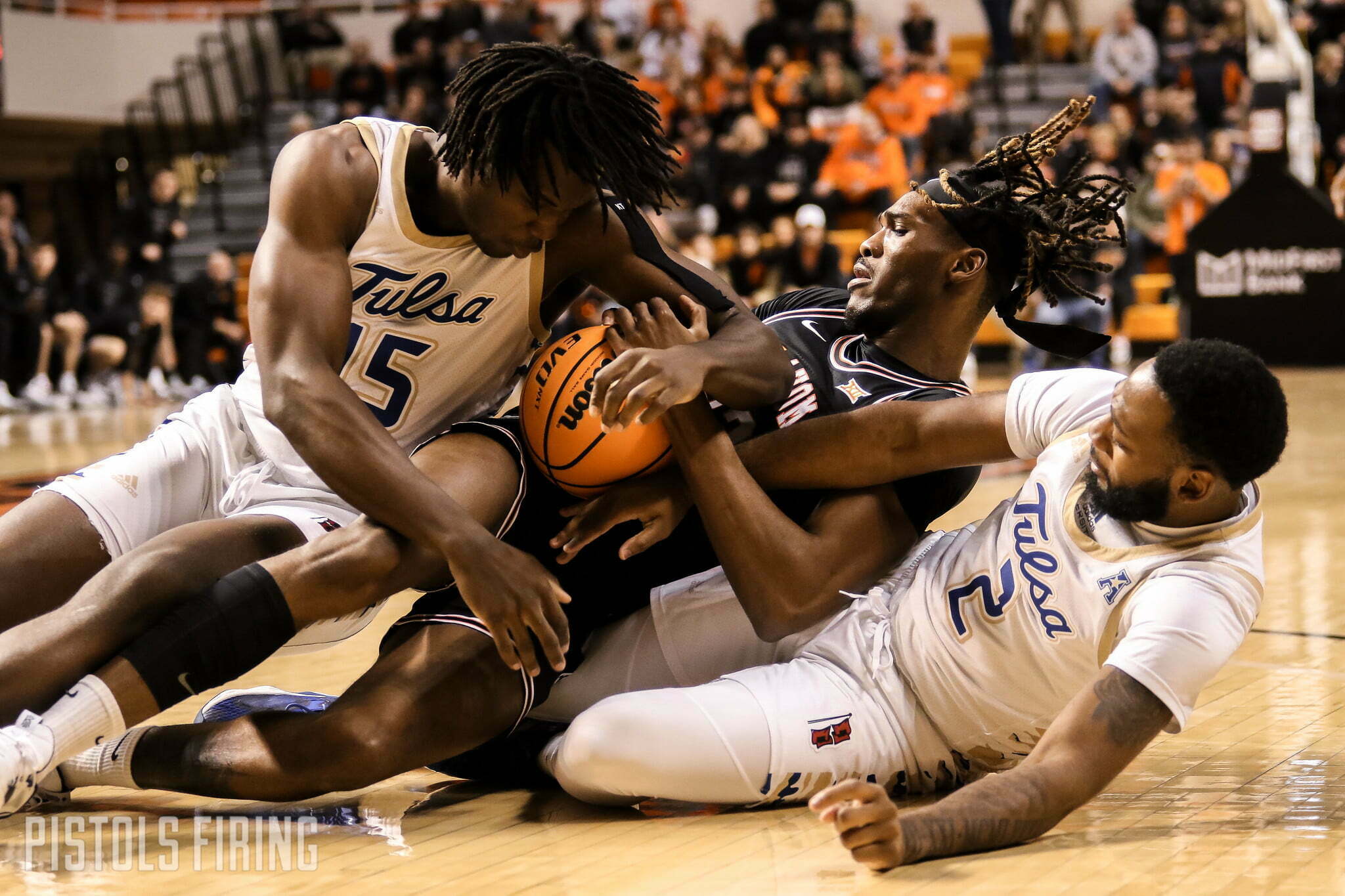 The Cowboys were unable to overcome turnovers and a healthy free-throw disparity in their first game against a ranked team this season.

Oklahoma State fell to No. 8 UConn 74-64 on Thursday night in Connecticut, dropping OSU to 5-3.

The Cowboys turned the ball over 17 times in the game, and UConn shot 33 foul shots to the 19 OSU put up — two stats that would be hard to overcome in any game, much less a game on the road against a Top 10 foe. Here are five thoughts from the contest.

On paper, an 8-0 UConn vs. a 5-2 Oklahoma State wasn’t the most hype matchup on Thursday’s college basketball slate, but the matchup of Adama Sanogo vs. Moussa Cisse sure seemed like a lot of fun. … It wasn’t.

Cisse got two fouls in two minutes leading him to sit for the final 18 minutes of the first half. By the time he got back in to start the second half, the game was essentially well in hand for the Huskies.

Blink and you missed it, Sanogo was in double figures seven minutes into the game. He finished with 20 points and six rebounds.

Playing only 16 minutes before fouling out, Cisse finished with no points and 10 rebounds — weird stat line, to say the least.

As we’ll come to find out, the stripes called quite a bit of touch fouls Thursday, but it sure would’ve been fun to watch these two go at it for a full 40 minutes.

How on earth does that happen? Well, OSU had 10 turnovers in the first half, and the Cowboys shot four free throws to UConn’s 19.

The Cowboys led 28-25 before the Huskies closed the half on a 23-3 run. That run included a 15-0 Huskies’ run that saw eight free throws fall. UConn opened the game with a 13-3 personal foul advantage. When the Huskies entered the double bonus, OSU was still four UConn fouls from the normal bonus.

There were plenty of justified foul calls in there (like Bryce Thompson nearly spearing a 3-point shooter in half), but any wind the Cowboys seemed to find was blown straight through the referees’ whistles.

3. Moral Victory: The Pokes Didn’t Give Up

On the road with their double-double machine on the bench and seemingly everything going the Huskies’ way, it would’ve been easy for the Cowboys to let go of the proverbial rope and look to get back to Stillwater, but that didn’t happen.

UConn led by as many as 20, and with less than a minute to play, the Cowboys cut that lead into single digits.

This ended up being the closest game the Huskies have played in this season. Entering Thursday night, it was their 15-point win against Alabama.

UConn is good — like good, good. The Huskies shoot a high clip from 3-point range, and they have the size to bang with the best of them. Jordan Hawkins, who Mike Boynton called a pro this week, scored a game-high 26 points and hit five 3-pointers. That paired with all the things Sanogo can do make the Huskies a tough out for anybody.

4. The Kalib Boone at Power Forward Experiment Seems to Be Going Well

This being the Cowboys’ first big test of the season, I was intrigued what Kalib Boone would look like at his new position.

Sharing the floor with Moussa Cisse this year, Boone has played power forward instead of center like he has primarily played in his first three seasons with the Cowboys. He had a team-high 15 points to go with eight rebounds against the Huskies.

OSU is able to take advantage of smaller guys guarding Boone because the opposing centers have to stay on Cisse. When Cisse hit the pine with foul trouble early, UConn adjusted and put Sanogo on Boone for a few possessions, but overall, Boone was a bright spot.

The Cowboys have started to play a little better, but what they can’t do now is let a disappointing night in Storrs drag into next week.

OSU has a bit of time off before playing Sam Houston in Stillwater on Tuesday. OSU’s next three opponents (Sam Houston, Virginia Tech and Wichita State) are all in the Top 100 of the KenPom rankings. This is a chance to parlay the momentum gained from drubbing Tulsa and Prairie View into some quality wins that could help you come selection Sunday.