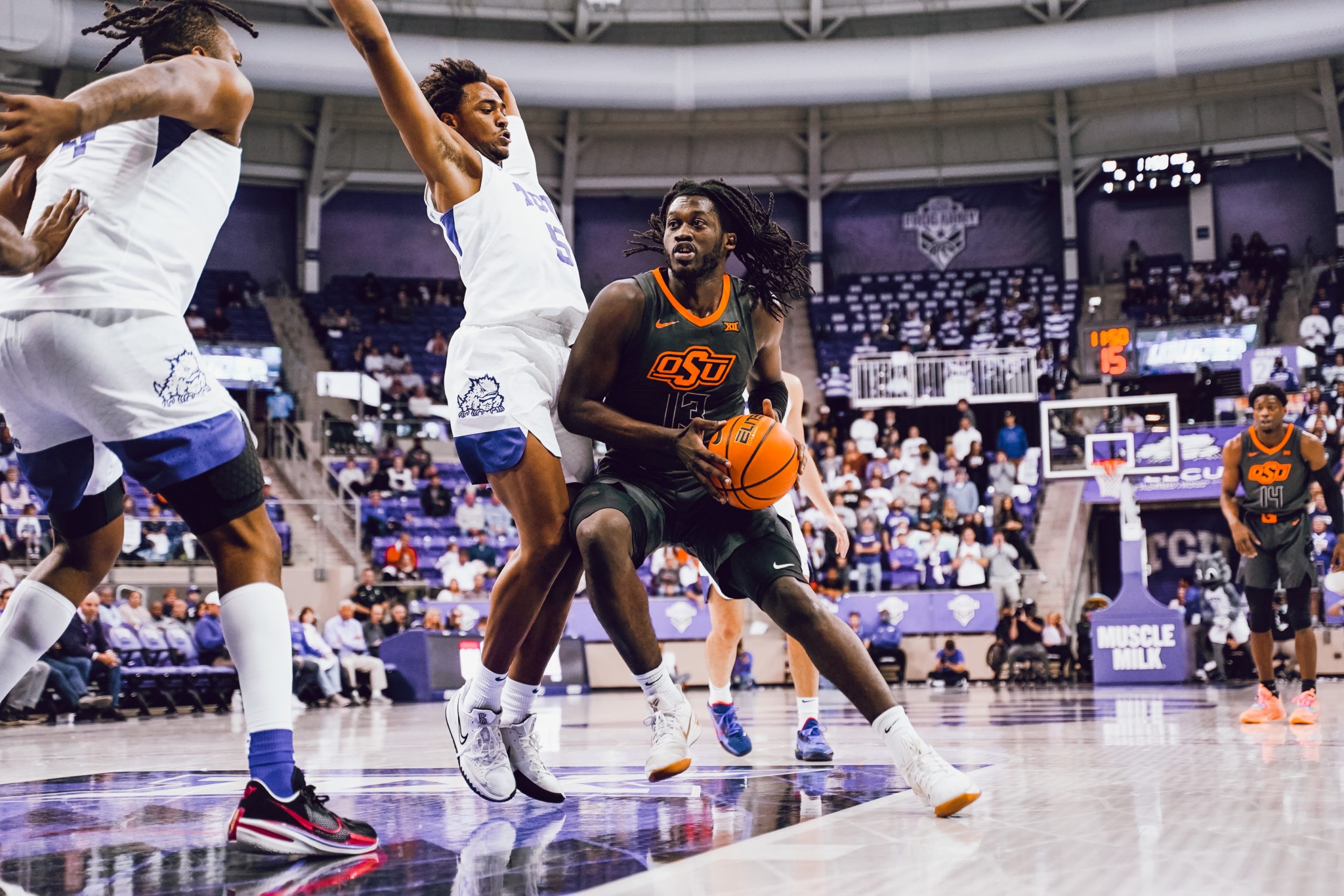 FORT WORTH, Texas — The Cowboys’ struggles in Cowtown continue.

Oklahoma State lost to TCU 77-73 on Tuesday in Schollmaier Arena after the Horned Frogs thwarted a gutsy Cowboy comeback attempt. Here are five thoughts from the game.

TCU is among the nation’s best in offensive rebounds a game, ranking in the Top 5 nationally. The Horned Frogs bullied the Cowboys on the board Tuesday night to the tune of a 37-24 advantage.

Early returns showed the Cowboys were ready to fight on the glass; the Pokes had two offensive boards on their first offensive possession. The second of those came with 19:26 on the clock. OSU didn’t record another rebound, offensive or defensive, until there was 12:38 to play in the half. That’s nearly seven reboundless minutes. That’s almost difficult to do.

“They did what they’ve been doing well all year,” OSU coach Mike Boynton said. “They’re the No. 1 offensive rebounding team in the country for a reason. They’re committed to it, and obviously that was a big factor in the game tonight.”

And when TCU got to the foul line, squinky was there to bump a few in.

The Horned Frogs entered Tuesday’s game shooting just 66% from the line. TCU shot 78% against OSU, going 18-for-23. Lampkin, who is shooting 52% on his career, got a pair to fall with 19 seconds left to put the Horned Frogs up two scores. The first of those makes bounced all the way around the rim before falling.

It had the same feeling of when OSU played West Virginia on Jan. 11. The Mountaineers shot 64% from the stripe entering that game before going 21-for-22 (95%) against the Pokes.

Any time the Cowboys travel to Fort Worth, it’s a homecoming of sorts for about half of the OSU roster … but the Pokes haven’t won in Cowtown since the 2016-17 season.

That means it’s been since Jawun Evans was running the point and Brad Underwood was roaming the OSU sideline.

There was a good contingent of orange among the 5,246 in Schollmaier Arena. Avery Anderson, Isaac Likekele, Tyreek Smith and Chris Harris all played their high school ball in the DFW metroplex, but this funky-patterned gray court has given the Pokes fits.

Likekele was as aggressive as ever trying to find his first win in four attempts in a building about a 30-minute drive from his high school.

Likekele did most of his heavy lifting in the second half, where he scored 17 of his points. He was 8-for-10 from the field in the frame. He scored six of OSU’s first eight points in the half and went on a 5-0 run with about five minutes to play. But the win close to home just wasn’t meant to be.

“It’s obviously been an issue for us trying to figure this thing out down here,” Boynton said. “Obviously he goes through his career not having gotten it done, and I hate that for him and for us. But I saw him playing with a determination of trying to at least get one before it was over for him.”

The Cowboys have taken steps forward offensively in recent weeks, but it seems to have come at the expense of their defense.

“We’re not guarding the ball very well, we’re out of position away from the ball and then we’re not rebounding it,” Boynton said. “If you don’t do the first one, the other two are kinda irrelevant. But certainly, even if you guard the ball well and then don’t rebound, kinda moot.”