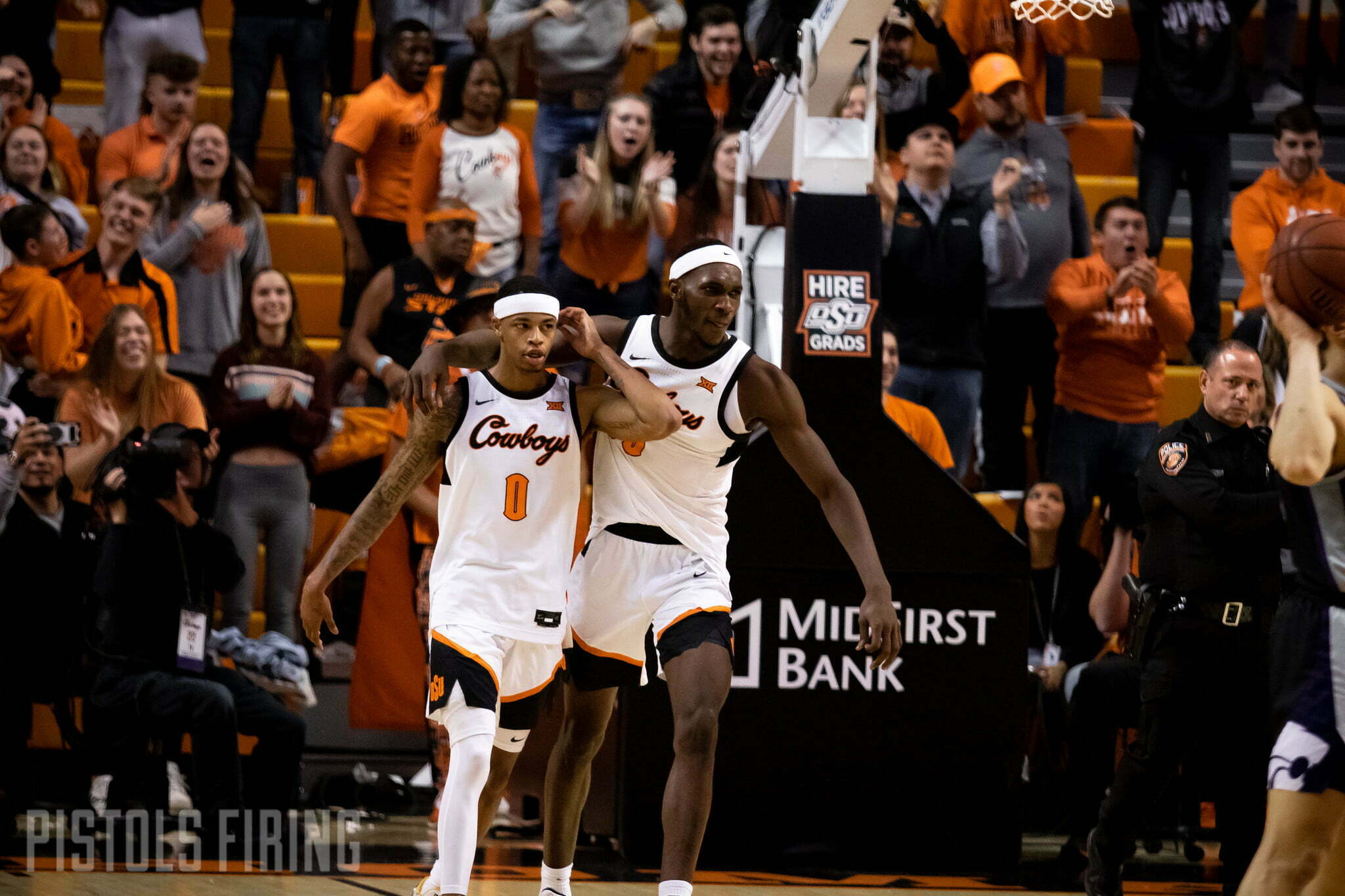 STILLWATER — The banned Cowboys don’t have a ton left to fight for, but they’re still fighting.

Oklahoma State beat an on-the-bubble Kansas State squad 82-79 in overtime on Saturday in Gallagher-Iba Arena. Here are five thoughts from the game.

Isaac Likekeke scored a whopping one point Saturday, but his defense down the stretch was invaluable.

With Nijel Pack, the third-leading scorer in the Big 12, driving at the end of regulation, Likekele used his size to stay in front and block Pack’s would-be game-winner. That came less than a month after Pack hit a game-winning 3 against the Cowboys in Manhattan.

That block was on a 6-foot guard, but with time dwindling down in OT, Likekele blocked 6-foot-10 Davion Bradford at the rim to preserve OSU’s three-point lead.

“It was who Ice is when he’s at his best,” Boynton said. “He can guard, I would say, 90% of anybody’s roster in the country. There’s some guys, like [Illinois’ 7-foot center] Kofi Cockburn, I’m not sure I would want to match him up on, maybe [Purdue’s 7-4 center] Zach Edey. Other than that, he can guard anybody’s [point guard] through [center], and I’ll feel good he’ll be in position to make it a toss up at worst.”

The Cowboys have struggled from 3-point range all season. During regulation Saturday, they were 5-for-17. Then all of a sudden Avery Anderson and Bryce Thompson go 4-for-5 from deep in the OT period to give the Cowboys the win.

The clutch gene was real Saturday afternoon. The sample size is incredibly small given the entire season of data points thus far, but it at least somewhat shows that the Cowboys are capable at hitting 3s. They just haven’t always fallen this year. It also shows the Cowboys have some dudes that didn’t back away from the big moments late.

“[Clutch is] real,” Thompson said. “It’s the work. You’re not gonna make those shots if you don’t work on it because you’re gonna be thinking, ‘It’s overtime. It’s a big game. Crowd’s loud.’ But when you put the work in, man, it’s just second nature. You’re not thinking. You just let it go.”

The Cowboys have very little to fight for at this point in the year, but they’re still fighting like crazy.

Against a team fighting for its NCAA Tournament life, one would think the Cowboys would have less fight than the Wildcats. But then even after the woeful call that gave Pack three free throws in overtime, the Cowboys just kept going. There has been a narrative out there all season waiting for the Cowboys to quit, but with four games to go, they still haven’t.

“We’re trying to win these last five games that we have,” Anderson said. “Whenever it’s time to win, we got to know that we only have four more games now. We gotta empty out the tank, do whatever we gotta do to win.”

In 15 minutes on the floor Saturday, Kalib Boone was a perfect 4-for-4 from the field with 11 points.

Boynton said Boone’s time on the floor was somewhat matchup-specific, but when he got out there, the Cowboys made it a priority to dump it to him inside. His back-to-the-basket game is a thing of beauty. The footwork, the balance, knowing when help is coming, I could watch highlights of it all day. It’s like this scene from Parks and Recreation:

That changed against Kansas State. He played 14 minutes, the most he has as a Cowboy. He scored nine points, going 3-for-4 from the field and 2-for-3 from 3-point range. His nine points tied his career-high he set at Syracuse last season.

Newton is a similar-styled player to Keylan Boone, who didn’t play at all Saturday. Boynton said that Newton was “just more ready.”