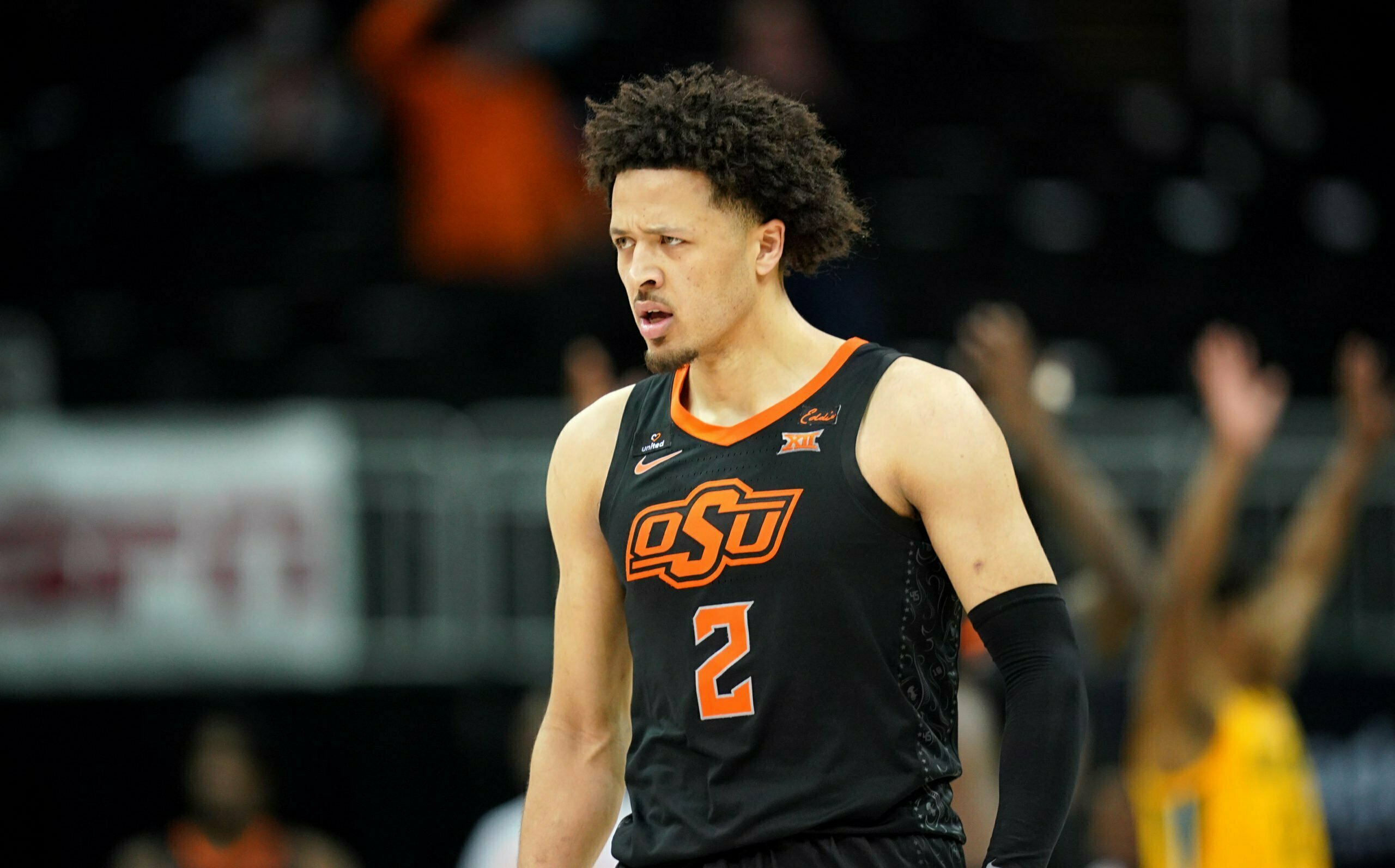 This might be the best stretch of basketball in Oklahoma State’s history, and it will continue for at least one more night.

The Cowboys beat Baylor 83-74 on Friday in the Big 12 Tournament semifinal round in Kansas City. It’s just the second time the No. 2 Bears have lost this season.

Here are five thoughts from the Cowboys’ 20th win.

1. The Run of OSU Dreams Continues

The Cowboys seem to keep reupping the game of the year.

There was the Texas Tech game where Mike Boynton went nuts with the OSU student section. Then came Cade Cunningham’s 40-point Bedlam debut. Then the Bedlam sweep in Stillwater. Then there was Avery Anderson’s 31-point outing without Cunningham in Morgantown. Then the back-to-back West Virginia upsets. And now, the Cowboys beat the (nearly) unbeatable Bears to go to the Big 12 Championship game.

When the emotions return to normal, Cunningham’s 40-piece in Norman will probably be the actual game of the year, but holy smokes what a run.

OSU has played seven straight games against ranked opponents and has gone 6-1 in that stretch. And the Cowboys’ reward is to play another ranked team in No. 13 Texas in less than 24 hours.

“Everybody’s stepping up,” Cunningham said. “Everybody’s trying to find ways to perfect their role and whatever that is. The staff has given us great game plans and just us buying into those, I think that really translates to us winning more. Once we won a couple big games, I think our confidence is only growing. I think it’s through the roof now. We’re still going. We’re trying to see how far we can take this.”

At the start of this spree against ranked foes, I wrote that Mike Boynton’s price tag was only going up, and some argued that statement. Here we are.

Since I wrote that, OSU has announced an upcoming change at athletic director with Chad Weiberg stepping in for Mike Holder, adding to the intrigue of this storyline.

Boynton is paid least among Big 12 head coaches, and schools are going to come calling after this year. I get that he still hasn’t even played in an NCAA Tournament game, but that isn’t going to stop schools from coming.

OSU needs to pay Boynton because other schools want him not because of the on-court stuff (which, see thought No. 1, is going through the roof right now).

Boynton gets “it.” He preaches defense. He recruits. He is exciting. He shows up to baseball games the day after he beat West Virginia in Morgantown. Heck, he wished Eddie Sutton a happy birthday at the beginning of his press conference after beating Baylor on Friday night.

He isn’t the traditional “OSU guy,” but he has dove in head first to OSU’s culture. If he gets poached because OSU isn’t willing to give him as much as he has given OSU, that would be a tragedy.

The debate of the Big 12’s Player of the Year seems more clear now than it did when Cunningham was given the award Monday.

His three second-half 3s were all coldblooded, too.

First, there was a nasty step back that had Matthew Mayer on skates to tie the game at 50.

Then Cade stepped back on MaCio Teague to give the Cowboys life after a Baylor run.

Finally, there was the 3 that gave OSU its first lead in about 10 minutes of game time.

Cunningham finished with 25 points, eight rebounds, five assists and a steal. He also had just three turnovers, the fewest he has had in a game since Jan. 9.

The past few games have been a good showcase of OSU being more than a one-man show, but Cunningham reasserted himself in a game against one of the nation’s elite teams.

I coined the squadron “Operation Spark Plug” early in the season and put Avery Anderson, Rondel Walker, Bryce Williams and Matthew-Alexander Moncrieffe in the made-up group.

The first two of them have since heralded new nicknames in my made-up fantasy world: Sauce Anderson and Runnin’ Rondel. Those two were key to OSU’s success against the Bears.

Anderson dropped 20 points on 62% shooting. In that stretch of games I mentioned at the top, Anderson has averaged 17 points per.

His biggest basket Friday came with 2:09 to play with OSU down 72-70. Anderson got to the rim and drew contact for an acrobatic and-one to give the Pokes the lead.

On OSU’s next possession, Walker made a baseline cut and put up an and-one of his own to extend the lead Anderson took.

Walker had been in a bit of a slump since scoring 11 in the first Bedlam game. He finished Friday’s contest with 11 points on just six shots. He also had six rebounds and a block.

The duo were able to light Baylor aflame in transition in the first half constantly beating the Bears down the floor, alas Runnin’ Rondel.

Cunningham and Isaac Likekele agreed that Walker has more straight-line speed, but Anderson is faster with the ball in his hand.

Likekele said he spoke with Walker on Thursday night and Likekele told Walker that he was going to play good against the Bears.

Walker’s coach also thinks quite highly of the freshman guard.

“He’s a stud,” Boynton said. “And I don’t like to do hyperbole, really, but once we spend some time getting his shot right, he’ll have the ability to not have to stay in school for four years. That’s how good he’s gonna be.”

5. How Does OSU Emotionally Reset?

This was an emotional game for OSU.

You could tell by how much the Cowboys were communicating defensively early on, pointing out where Baylor’s shooters were going, and you could tell by the amount of Cunningham’s trash talk hit the courtside mics, that this meant a lot to OSU.

Heck, after Thursday’s game, Cunningham and Anderson were talking about how bad they wanted to get another shot at Baylor.

Now that those emotions have seen their conclusion, the Cowboys have to reset and go again in Saturday’s championship game. It feels like they already beat the final boss, but it would be a shame if they did that and fall short to Texas.

“We didn’t come to play Baylor,” Cunningham said. “We came to win a Big 12 Championship.”