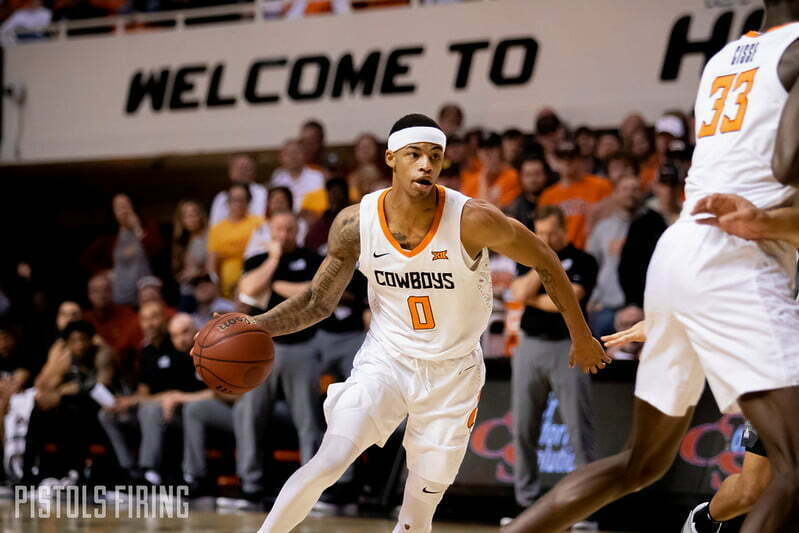 STILLWATER — The Cowboys were in a Rocky-esque slugfest Wednesday night and came out on the wrong end of it.

In a game that had more lead changes than years I’ve been alive, Oklahoma State fell to Iowa State 84-81 in overtime in Gallagher-Iba Arena. Here are five thoughts from the game.

Oklahoma State’s games as of late have been runs answering runs. Wednesday night was a night of baskets answering baskets.

“Losing sucks,” OSU coach Mike Boynton said. “Whether it’s by three in overtime or 12, by 20, at the end of the day you play this game and you compete to win. You try to do all the things along the game to put yourself into a position. While you feel a little bit let down at the end of a game like this because you were right there, losing by 20 doesn’t feel any better.”

The Cowboys won’t be happy they lost this game, but it could be a turning point for junior guard Avery Anderson.

Entering Wednesday’s game, Anderson had only scored in double figures once in 2022, a 12-point game against TCU. But Wednesday night he looked like the Anderson everyone expected coming into the season. He put up a career-high 34 points, 27 of which came after halftime.

It didn’t start in his patented smooth takes to the rim. It started with spot-up shooting from 3-point range. He was 5-for-11 from 3 after entering the game 15-for-48 from deep. But then he started getting his mojo back. The jump shot that got him to 30 points was a baseline drive that he stopped and faded away on. It was vintage Avery.

Anderson scored 21 of the Cowboys’ final 22 points of regulation then piled in a team-high four points in OT. He had his fingerprints all over OSU’s offensive game, and now it’s just a matter of him finding a way to keep the ball rolling.

“Show up tomorrow and do the job again,” Boynton said on how Anderson builds off it. “Can’t be satisfied. It certainly doesn’t sound like he was in here, but you gotta show up tomorrow with the same mindset that you had Monday and Tuesday to help you to prepare to play well today.”

For all that Anderson did in the second half and onward, Isaac Likekele drove the bus early.

Likekele started the game with a steal that lead to an open layup. Then he got another steal that led to a Moussa Cisse dunk. After a Rondel Walker free throw, Likekele then got an assists on a Bryce Thompson breakaway layup. Likekele was responsible for six of the Cowboys’ first seven points, all of which came quite easy to the scorer.

From the final five minutes of regulation on, Brockington was 5-for-6 with 12 points. It wasn’t one dagger that killed the Pokes; it was death by a thousand cuts.

“The other team’s got good players,” Boynton said. “They practice, they watch film, and sometimes a good player is just able to make a shot under duress. We lived with a guy like that last year, and we saw it. So give credit, that kid’s good. He’s a good player. We’ll obviously have another opportunity to see him again, and we’ll try to defend him a bit better. But you force a guy to score 26 points on 20 shots and many of them challenged, then you just pat them on the butt and try to get better the next time.”

With Anderson and Likekele shouldering the scoring load, there wasn’t a ton of help elsewhere.

The trio of Bryce Thompson, Rondel Walker and Keylan Boone all had bad shooting nights. That isn’t going to happen all too often. The trio combined for 14 points but was 3-for-19 (16%) from the field.

The Cowboys haven’t been able to put it all together offensively yet. When Thompson was rolling, Anderson was struggling. Anderson had a big night, but Thompson had his struggles. Keylan Boone has had big outings like the 17 points he scored against Texas on Jan. 8, but over the past three games he has scored three points.

They don’t all need to be going at once — that’d be great — but if they can just get two or three of Anderson, Thompson, Boone, Walker and Bryce Williams (when he gets back) going, it could certainly go a long way.