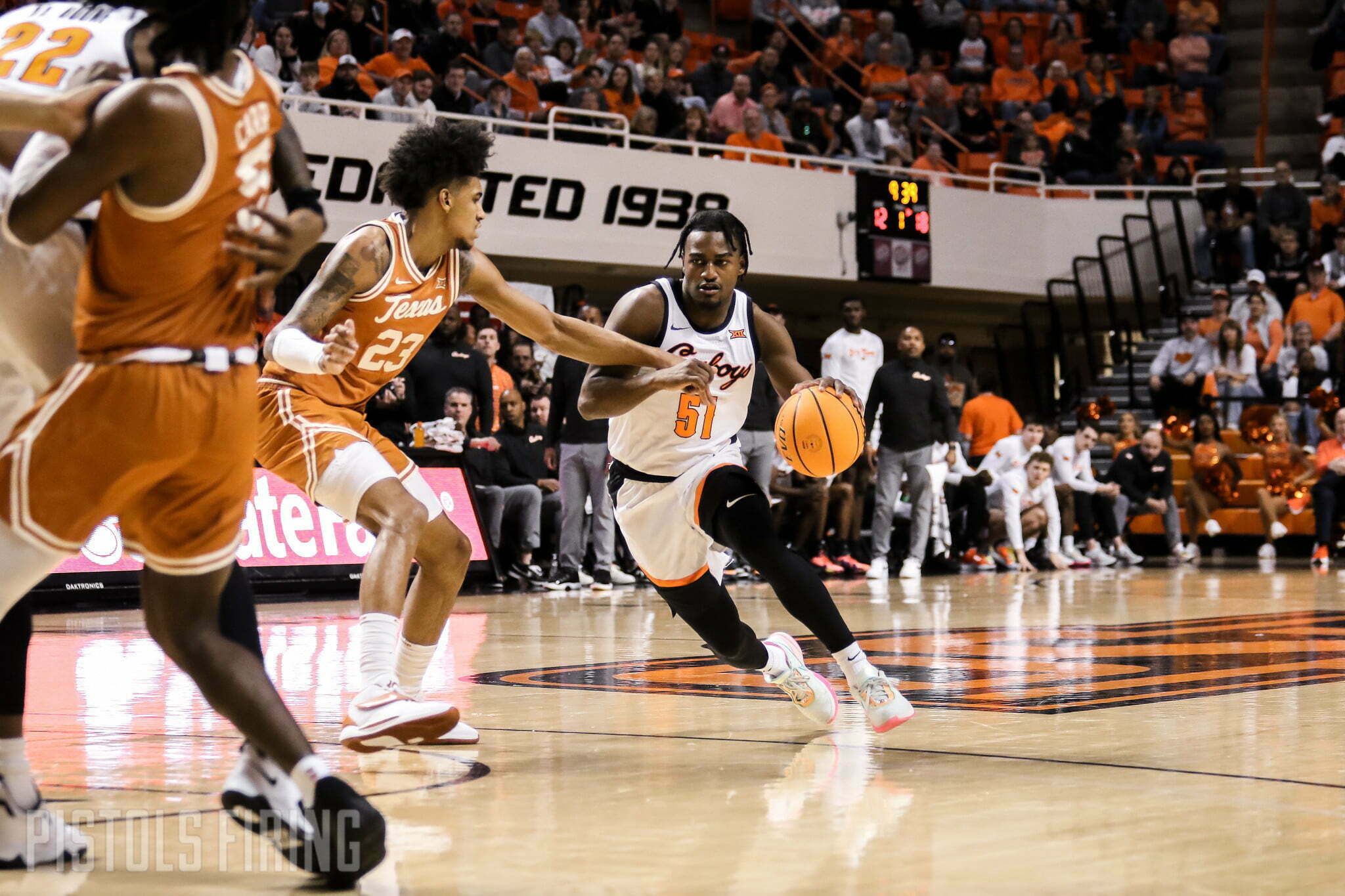 AUSTIN, Texas — The Cowboys are usually solid on the defensive end, but Tuesday they gave up the most points they have all season.

Oklahoma State fell to No. 10 Texas 89-75 at the Moody Center in a game that was a polar opposite of the teams’ first meeting, a low-scoring, 56-46 UT win in Stillwater. Here are five thoughts from the Austin shootout.

1. Beat on the Glass

The Cowboys got eaten alive on the glass Tuesday, one of (if not the) main reasons the Cowboys couldn’t get over the hump against the Horns.

Texas had 14 offensive boards. The result was the Longhorns had 16 second-chance points to OSU’s four. It also meant the Cowboys struggled to string together stops to get a run going with Texas keeping OSU about eight to 11 points away for most of the night.

“It’s just toughness,” Woody Newton said. “They just out-toughed us on the glass. Our first-shot defense was pretty good. We just couldn’t come together and get a defensive rebound and go to the other end in transition. If you get them stops and get the rebound, you can get out in transition and score and it’s a whole different ballgame at that point.”

Avery Anderson, the reigning Big 12 Player of the Week, fouled out after just 24 minutes on the floor Tuesday. Kalib Boone also had to sit in the first half with some foul trouble, playing just 11 minutes.

When two star players (on offense and defense) like that aren’t on the floor (and Moussa Cisse is on the bench nursing an injury), it’s going to be hard to win … especially in the Big 12 … especially on the road.

When Anderson was on the floor Tuesday, he was good. He failed to reach double figures for the first time in four games, but he had nine assists and only one turnover.

Boone was dominant on the offensive end when he was on the floor, dunking four times while scoring 18 points and going 8-for-9 from the field.

John-Michael Wright had a good performance against Iowa State this past weekend, but he was great against the Longhorns.

He tied the team-lead with 18 points, going 4-for-10 from 3-point range. His 3s were keeping OSU in it. He hit one at the start of the second half to stabilize after Texas started on a 5-0 run. Then he hit two in the final 10 minutes of the game where each put OSU back to within single digits.

“I don’t really say I played good whenever we lose because ultimately we play to win,” Wright said. “I think I helped a little bit positively, but there are a lot of negatives that went wrong in the game that I was responsible for.

“I have been in a little slump, but my coaches and my teammates they just keep giving me confidence. I’m still getting extra shots up, just seeing the ball go in. It was good to see a couple go in, but I would have rather got the win and had zero points than lose and have 18 points.”

Since these teams met in the Big 12 Tournament final in 2021 (Cade’s year), Brock Cunningham has gone 7-for-7 from 3 against the Cowboys. Every time he catches the ball alone on the 3-point line, it’s going in, and it’s going to sting.

Cunningham has a career average of 2.4 points. He scored 15 against OSU on Tuesday night and has averaged 6.6 a game against OSU in those previous five games going back to the Big 12 final.

5. The Curious Case of Bryce Thompson at the Foul Line

Bryce Thompson entered Tuesday as the Cowboys’ most efficient 3-point shooter, hitting a team-high 34 3s at a team-high 40% clip. But after going 1-for-4 from the foul line against UT, he is now shooting just 56% from the line this season.

It’s perhaps the most puzzling trend of OSU’s season. Thompson is a good shooter. He entered the night as OSU’s leading scorer, but something is going wrong from the foul line, and it just doesn’t make a ton of sense. He hasn’t particularly been great from the stripe in his career, shooting 65% as a freshman at Kansas and 67% last season, but the extra dip this year is all the more puzzling.

“Clearly he’s not a bad free-throw shooter,” OSU coach Mike Boynton said. “I don’t know if it’s something psychological for him here. It kind of dates back early. This is kind of something that reared its ugly head in the Southern Illinois game [where Thompson went 1-for-6]. I can still remember vividly not being able to close that thing out at home.

“We just gotta keep working through it. He’s still shooting the ball from 3 well. I don’t know if he’s not seeing it. Maybe we need to adjust his mechanics, but it’s certainly an issue right now for us.”