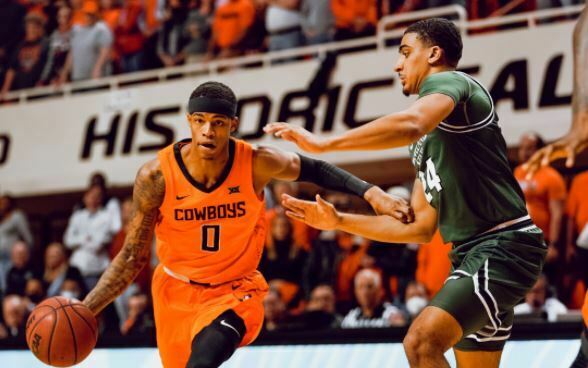 STILLWATER — With 6.1 seconds and a dream Avery Anderson went the length of the floor to avoid falling to 0-2 vs. the Horizon League.

Oklahoma State beat Cleveland State 98-93 in overtime on Monday night in Gallagher-Iba Arena after the Vikings had an 84-82 lead with 6.1 seconds to play. That was before Anderson took an inbound pass and raced the length of the floor to score a contested layup with 1.6 to play.

The regulation drama didn’t end there, however. Bryce Williams intercepted Cleveland State’s full-court inbound pass, but he stepped on the end line under his own basket. That gave the Vikings a chance with 0.7 seconds to play, but an attempted alley-oop was unsuccessful, forcing OT.

Anderson scored six of his 29 points in OT. He finished an uber-efficient 11-for-15 (73%) from the field with three of his misses being 3-point attempts. He also had four rebounds, three assists, four steals and five turnovers.

Bryce Williams also finished with 29 points, going 10-for-19 from the field and 5-for-10 from 3-point range. He added four rebounds, four assists, a block, two steals and seven turnovers.

Here are five thoughts from the game that made the Pokes 7-3.

Williams made his first start of the season Monday, doing so two days after he graduated despite having a public distain for school.

In a lineup with Anderson and Isaac Likekele (two point guards), Williams was the one running the show as the Pokes’ lead ball-handler, something OSU coach Mike Boynton said comes natural to Williams.

It was surprising that, despite Williams’ dominance in regulation, Boynton put the ball in Anderson’s hands with 6.1 seconds to play needing a bucket. It was even moreso surprising considering Anderson had a pair of costly turnovers in the final five minutes, but Boynton said Anderson will likely be his go-to guy all season when needing a basket.

“In that situation, you need to have a guy that has a little, you know, not give a … how it’s gonna turn out” Boynton said. “Some guys you can’t have the ball in their hands. They’re afraid to fail in that moment and they can’t have success because of that. He doesn’t want to fail, but he believes in himself. He believes he’s gonna go make a play.”

The two combined for 58 points on 65% shooting. It was a career-high for Williams (he had a career-high 26 at the end of regulation). It was a season-high for Anderson after he scored 31 in Morgantown last season.

The Cowboys had a weeklong break between games, but it apparently wasn’t much of a break.

Coming off back-to-back losses, Boynton said he ramped up practices to the extent that even he was leaving sore. Williams had a gnarly looking strawberry on his right elbow that had to be taped up during the game.

The Cowboys finally busted a zone.

The Vikings threw some zone looks at the Cowboys in the first half Monday, but it wasn’t successful enough for Cleveland State to stay in it. The Pokes have struggled against zones all season, but they stepped into 3-point attempts more confidently Monday night, going 9-for-25 from deep. That’s tied for the most made 3s OSU has had this season. It also seemed as if the Cowboys made a more concentrated effort to get the ball into the high post and short corner, weak spots of zones.

“People can tell you you can do something forever,” Boynton said. “And every time you do it and you fail, then you start to wonder. Having success against it, I think will give us an ability to go back and say, ‘OK, here are some things we did well.'”

Cleveland State whipped the ball around Eddie Sutton floor until someone was shooting an open layup. It was a thing of beauty.

The Vikings shot 51% from the field Monday, by far the highest percentage OSU has allowed this season. Cleveland State made 23 layups and three dunks.

The poetic style of play is likely based on the fact that Cleveland State has 13 seniors on its roster of 19 players. Ten of 12 Vikings who played Monday were seniors.

OSU should always beat Cleveland State in basketball … but … this is no slouch of a mid-major team.

I just mentioned that the Vikings played 10 seniors Monday. The Vikings also won the Horizon League last season, making an appearance in the NCAA Tournament. They’re already off to a solid start in conference play this year at 2-0 (so is Oakland, a team OSU lost to).

Before Monday, Cleveland State hadn’t lost since Nov. 13, a month of winning.

Between Cleveland State and Oakland, the Horizon League might provide some fireworks this year, so despite going to OT with a mid-major, this was a good win.

“Everything we do is intentional,” Boynton said. “I scheduled the game. At one point, I was trying to fire myself for scheduling the game during the game. But I know that I try to do my best to prepare my team to see as much as we can in the nonconference so that there’s an opportunity that we can draw back on something once the calendar turns and we’re playing Big 12 teams.”