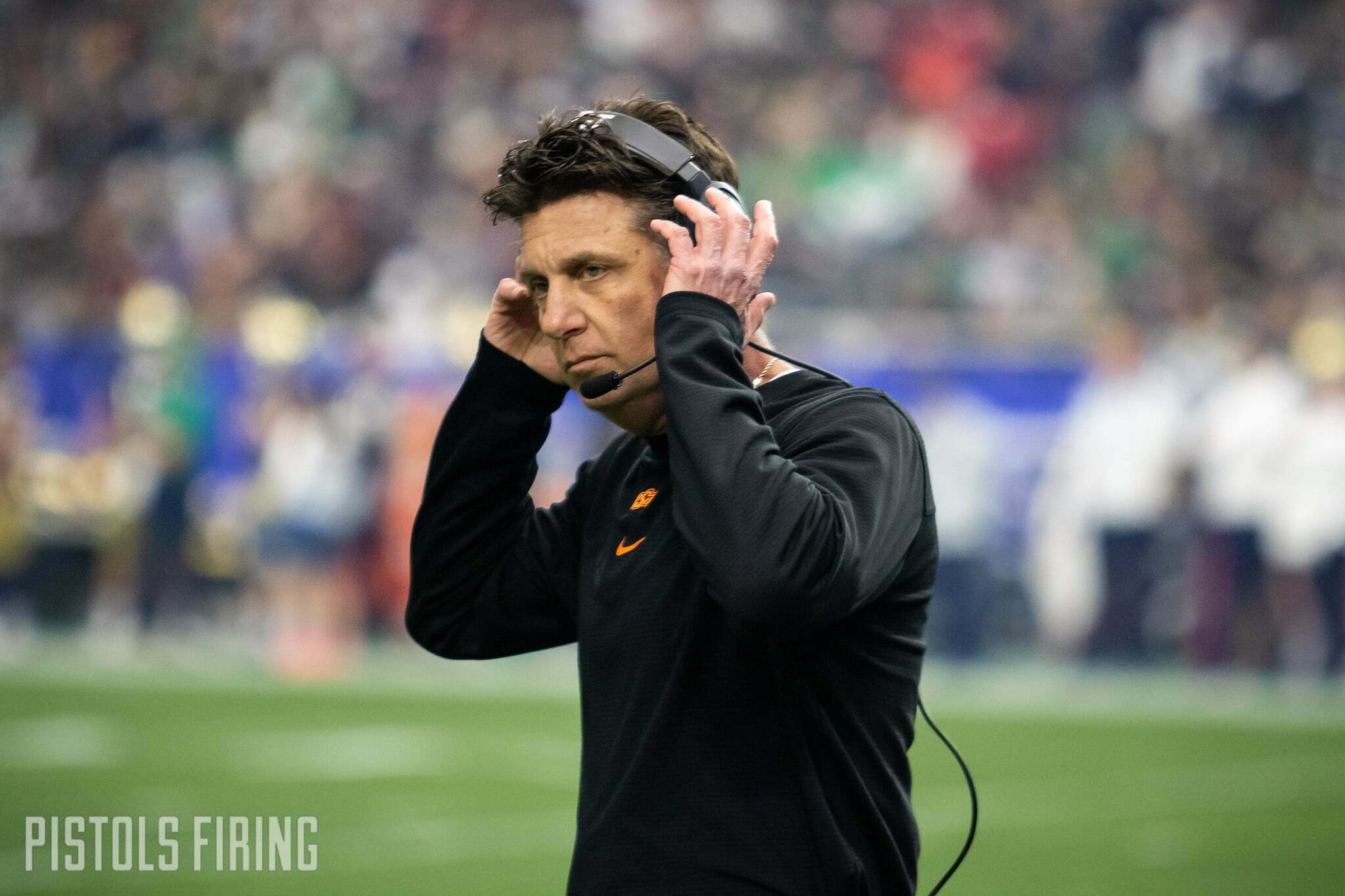 The Cowboys are going back to the desert for consecutive postseasons, but this time with a little less fanfare.

Oklahoma State will square off against Wisconsin in the Guaranteed Rate Bowl, in the first matchup between two programs that have been consistent winners for about as long as anyone. Both teams ultimately faced disappointing seasons but each will have a chance to end 2022 on a high note.

Here are my five thoughts on the bowl bid, the matchup and OSU’s 2022 season in general.

1. A Quick Look at Wisconsin

The Badgers have had a down year but expect a game full of the Big Ten stereotypes. Wisconsin boasts a balanced attack (nearly a 50/50 split pass to run) and a dynamic running back in All-Big Ten second-teamer Braelon Allen. The sophomore rushed for 1,126 yards and 10 touchdowns at 5.4 yards per carry. He didn’t play in the Badgers’ conference finale with an injury, so we’ll see if he makes the field in Phoenix.

The Cowboys have struggled to get much going in the ground game and it’s unclear who’s going to play quarterback, but I’m pretty sure we’ll at least see an interesting juxtaposition in styles between the two teams.

Between the transfer portal — which has already claimed OSU’s top tackler — and any bowl holdouts or injuries, it’s hard to know who exactly will show up in Phoenix. (Copy and paste that for every non-playoff bowl moving forward.)

If Spencer Sanders doesn’t go, you’d expect to see Garret Rangel start. The silver lining for the Cowboys would be that your young heralded QB gets to take advantage of his allotted four games (three starts) while still retaining his redshirt for this season. There are plenty of other questions about motivation and who will show up and play. We’ll just have to let those play out as we continue into portal season.

Quarterback will also be a question for Wisconsin. Shortly after the bowl announcement, Wisconsin QB Graham Mertz announced his intentions to enter the portal.

While there still may be some changes made to Oklahoma State’s staff before Dec. 27, I’m talking about the whirlwind that hit the Badgers over the past week. Last week, it was reported that Cincinnati head coach Luke Fickell was being hired to take over at UW, a move that apparently came out of nowhere even to some on the inside.

Fickell was one of the hottest names in a lot of coaching searches last year after leading Cincinnati to the College Football Playoff. He ultimately decided to stick with Cincinnati but will not bolt to the Big Ten before the Bearcats join the Big 12.

Wisconsin parted way with longtime head coach Paul Chryst after a 2-3 start this season while interim HC Jim Leonhard captained the Badgers to a 4-3 finish and got them bowl-eligible. Leonhard was reportedly blindsided by last Sunday’s news. So as far as the coaching matchup goes, it could be a lame-duck interim against one of the longest-tenured head coaches in the FBS.

Bit of a late-breaking update: in the bowl announcement news conference, Fickell said he will be involved with the Badgers leading up to the bowl game. He said he “envisions” himself being the head coach for the bowl — a quick turnaround to say the least.

4. A Historic Streak for Gundy

Although this will probably fall on deaf ears, I’ll throw in my obligatory “Mike Gundy’s captained OSU to new heights” spiel. Gundy is about to take his team to its 17th straight bowl game. Before his tenure, OSU’s longest streak was three. Under Gundy, OSU is 11-5 in those games, and he ranks ninth all-time in postseason wins in college football history.

Also under Gundy, OSU is one of only three Power Five teams to post winning seasons each of the last 16 years coming into this season. Coincidentally, the other two are Oklahoma and Wisconsin which are both currently 6-6. So depending on OU’s bowl outcome, OSU would be alone in that stat with a win over the Badgers.

All that being said, when you create that consistent winner, that monster referenced above, you’ve got to feed it. And with the way the Cowboys started this season compared to where it will end, that monster is malnourished. Expectations were high for the Cowboys this season and they fell short. A win on the way out can’t hurt but, ultimately, this will be a tough season to look back on for OSU fans.

5. What a Difference a Year Makes

Last season at this time, OSU was still reeling from a gut-wrenching loss in the Big 12 title game. The Cowboys’ Fiesta Bowl bid served as a decent consolation prize for a team that believed it could have made the CFP 24 hours earlier.

Fast forward to today and the Cowboys have been reeling for much of the second half of the season. After finishing 1-4, OSU went from a Big 12 Championship candidate to essentially being the seventh team from the league selected for a bowl. The Cowboys still have a chance to make it to eight wins for the eighth time in the last 10 years.

Can Gundy rally the troops and gain some momentum heading into next season? Will OSU lose many more players to the portal? Will 2022 be an aberration or the start of a downward trend? Again, we’ll have to see how it all plays out. Regardless, the Cowboys will come out of 2022 with more questions than answers.